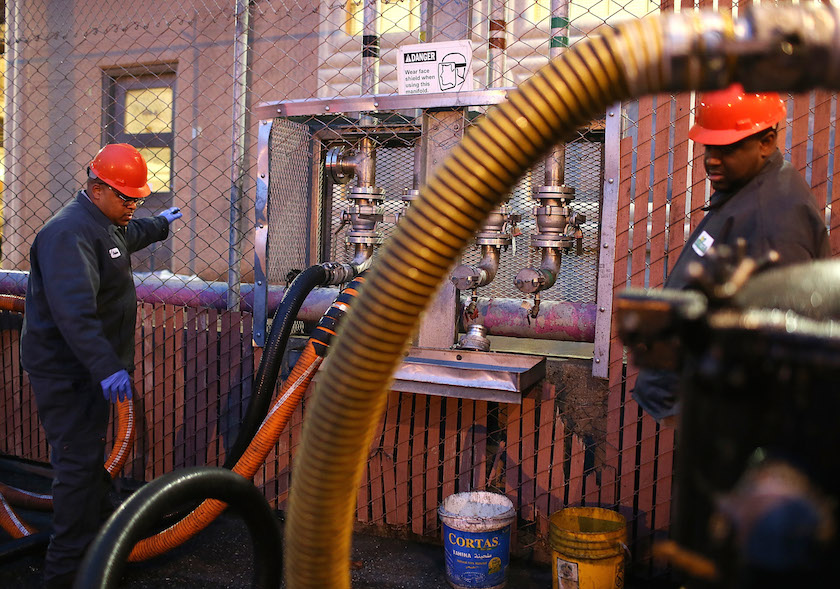 SAN FRANCISCO, CA - APRIL 05: Workers with the San Francisco Water Power and Sewer's SFGreasecycle program pump used cooking oil from a truck into a tank to be filtered on April 5, 2013 in San Francisco, California. Launched in 2007, SFGreasecycle is a program that will collect used cooking oil from San Francisco restaurants to be recycled into biofuels and also keeps oils from entering the city's sewer system. According to a recent report by San Francisco based nonprofit group Next 10, California continues to be the nation's leader in venture capital funding for green technology, green tech patents and the growth in clean power generation, resulting in reduced greenhouse gas emissions despite a growth in population. (Photo by Justin Sullivan/Getty Images)
Justin Sullivan Getty Images

The mood surrounding the ongoing COP21 climate talks in Paris has been fairly positive—a draft agreement is out, and there are strong signs a 195-nation deal will be signed by Friday.

But that main agreement is still sure to be full of compromises, and it risks being overshadowed by a series of compacts (and star-studded events) spearheaded by cities and their mayors. Paris has become a showcase for groups including the C40 alliance, United Cities and Local Governments, and ICLEI – Local Governments for Sustainability. The C40 has particular sway, as it now includes more than 80 cities, making up one-fourth of global GDP.

In contrast to the COP21’s aspirations for binding commitments, cities are approaching the climate problem through voluntary and collaborative efforts. ICLEI in particular is focused on knowledge-sharing, while many C40 member cities are also signatories to the Compact of Mayors. It provides uniform tracking standards and regular progress reports—just the kind of mutual-guilt club that works pretty well for people trying to lose weight.

According to the C40, this less rigid approach is yielding concrete—though arguably modest—results. They estimate that current actions by signatory cities will save 645 megatons of CO2 by 2020. That’s a small but significant fraction of the 8 to 13 gigaton reduction needed (by some estimates) to keep global warming below 2 degrees Celsius.

While national governments can regulate whole industries and invest in green technology development, the C40 focuses on more localized sources of greenhouse emissions, including transportation, buildings and developments, and landfills. Those are second-tier greenhouse emitters—agriculture and deforestation, for example, account for 24% of global emissions to transportation’s 14%, while buildings are only around 6%—but they’re easier for cities to take direct action on.

National governments have a harder time, in part because the nature of climate talks encourages them to give up as little as possible, while getting everyone else to do the heavy lifting. India’s national government, for instance, is currently pushing back against emissions limits, hoping to buy space for its developing, coal-heavy economy.

National governments are also often more divided than city leadership. The Obama administration, for instance, has signaled that it will not push for the Paris treaty to be fully legally binding, because that would require highly unlikely ratification by the Republican-controlled Senate.

But maybe the most important factor encouraging action by cities is that their leaders are more exposed to the consequences of climate change. “They know firsthand the problems brought about by fossil fuels, from urban air pollution to rising seas,” says Jamie Henn, co-founder of the climate activist group 350.org. Even as India pushes for the right to keep burning coal, for instance, Mumbai and Kolkata—among cities at the highest risk for climate impacts—have signed on to the C40.

Watch this Fortune video to learn more about COP21’s potential impacts on the energy sector: