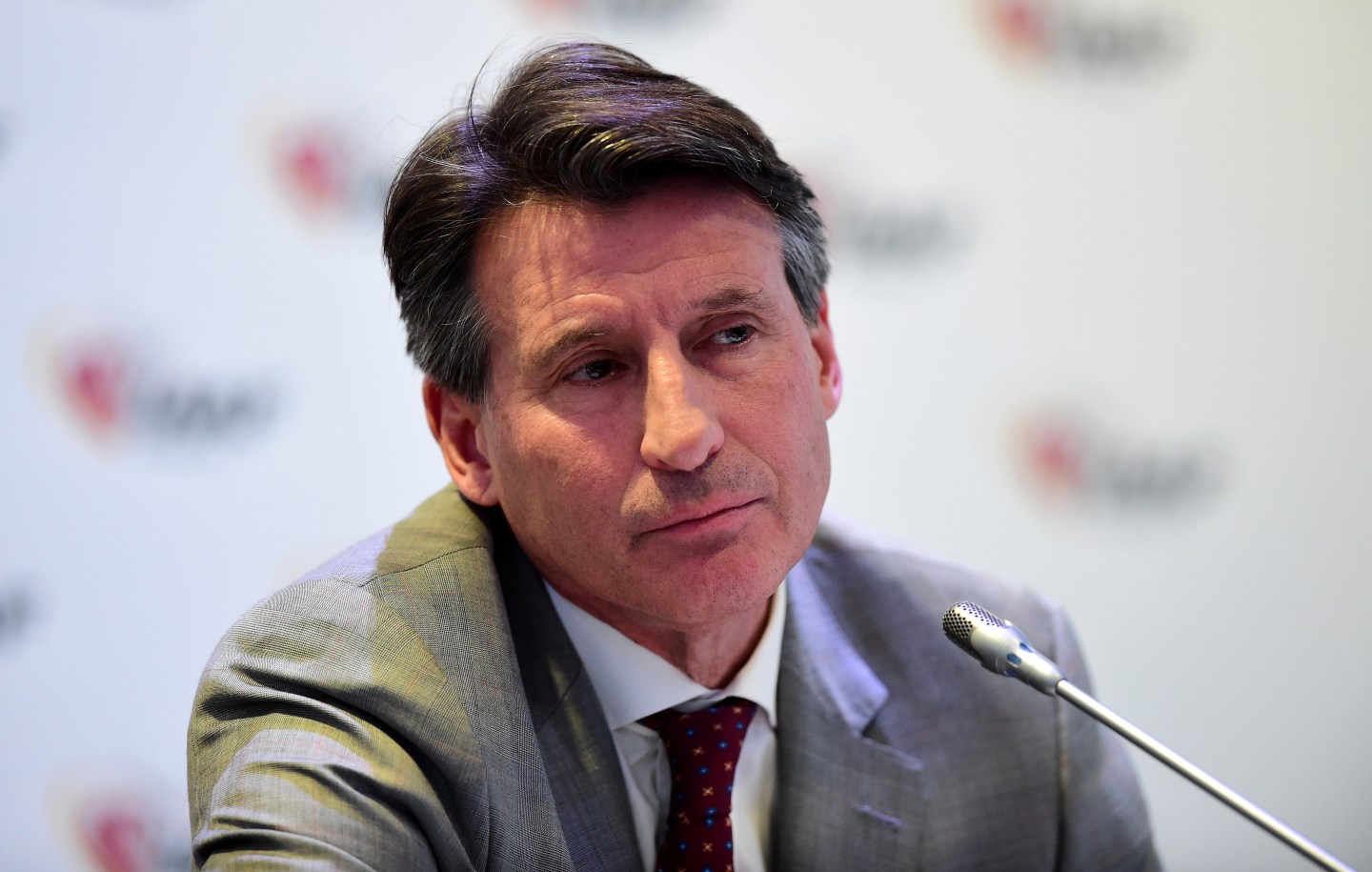 during a press conference following the IAAF Council Meeting at the Fairmont Monte Carlo Hotel on November 26, 2015 in Monaco, Monaco.
Photograph by Dan Mullan — Getty Images

If the newly elected president of the global governing body of track and field thought that ending his long-standing Nike deal would end the scrutiny over his connection to the company, he was sorely mistaken.

Seb Coe, a British politician and four-time Olympic medalist, became president of the International Association of Athletics Federations in August. The organization has more than 100 years of history and more than 200 member federations. (The term “athletics” has become dated, but was once a catch-all term for running and other track-and-field activities.) What FIFA is to soccer, the IAAF is to running. And like FIFA, it is experiencing a (smaller) corruption scandal.

When Coe became president of the organization, he came under fire for his long-standing sponsorship deal with Nike (NKE). For more than 30 years, Coe has been a paid “ambassador.” He was the international spokesperson for Designed to Move, a Nike fitness initiative launched in 2012. After criticism in the press, Coe officially ended his relationship with Nike at the end of November—reluctantly, it appears. Nike issued a mournful statement: “Sebastian Coe has informed us that he will no longer be able to play a role as an ambassador for Nike. Seb has been a Nike athlete since the 1970s and we are obviously disappointed, but respect his decision.”

But ending the relationship did not end the scrutiny. This week, at a British Parliament hearing on blood doping in the sport, Coe was grilled about his Nike ties.

The central purpose of the hearing was to discuss IAAF’s stance on blood doping, after a bombshell report from the World Anti-Doping Agency, or WADA, in early November that recommended the International Olympic Committee ban Russia from all competition. The IAAF responded by suspending Russia for the time being.

It took more than two hours into the hearing for a British member of Parliament to arrive at the Nike issue. When he did, he brought it up by asking Coe to explain why he ended the relationship, which, according to some reports, was bringing him £100,000 per year, or about $150,000.

“I’ve had a 38-year involvement. I was a sponsored athlete. I’ve had a long relationship,” Coe said. “I made the judgment, given the level of noise around the relationship, that this had become a monstrous distraction, that reality and perception had become horribly entangled, and I really didn’t want anything to subtract from the changes I’ve identified this afternoon that I’m making.”

The MP pushed further: “Would it not have been better to end that relationship upon your election?” Coe, a member of the House of Lords, was defensive. “Well, look… that relationship has always been properly identified,” he said. “You could have gone to the House of Lords web site at any time in the last 13 years and seen that. I was chairman of the bid committee, and then the organizing committee, for London [Olympics], where Adidas were our major sponsors… this issue was never raised, it was not actually raised in the media… But in hindsight, if I had thought that the noise would escalate to the point that it did? Yes, probably I would have.”

An MP summarized Coe’s argument that because he disclosed the relationship it was not a conflict, and quite clearly took issue with that notion. Eventually he asked simply, “Just to be clear, were there any points at which your interests as a sponsored athlete or person by Nike and your interest as a president or vice president of IAAF ever came into conflict with each other? Coe said no.

But there was in fact one major instance in which there may have been an overt conflict. Last April, the town of Eugene, Oregon won its bid to host the 2021 IAAF World Championships. It’s an event held every two years; Eugene was in the bid process for 2019, but lost by three votes.

When Eugene won its bid last April, Coe was vice president of the IAAF, and still a paid Nike ambassador. An MP asked him if he would agree that Nike had an obvious interest in the World Championships being in Eugene. Coe said, “No, I don’t conclude that.”

That’s a pretty disingenuous thing for him to say. Nike is based in Beaverton, Oregon, and has deep, historic ties to Eugene, which is also nicknamed TrackTown USA. Nike was founded in Eugene; Phil Knight, the founder of Nike, is an alumnus of the University of Oregon, which is in Eugene.

The MP grilled Coe on the fact that he had conversations with Nike executives about Eugene’s bid process for 2021: “Look, to anyone that follows these issues, the idea that Nike would be totally dispassionate on the idea of having the World Champions be in Eugene would not be credible at all… What you could have said to a Nike executive was, ‘I don’t think it’s appropriate for me to discuss it with you given your clear interest in the TrackTown bid.'”

In terms of optics, all of this is worse for Coe than for Nike. But Nike has bigger problems than Coe and the 2021 IAAF World Championships. The company is cooperating with a U.S. Department of Justice investigation into its 10-year, $160-million deal to sponsor the Brazilian national soccer team in 1996 and whether the deal was tied to bribes given to the Brazil soccer president at the time.

Do not expect the scrutiny over Coe’s personal ties to completely dissipate just yet.