Top 12 Reasons People Gave Up on the Apple Watch 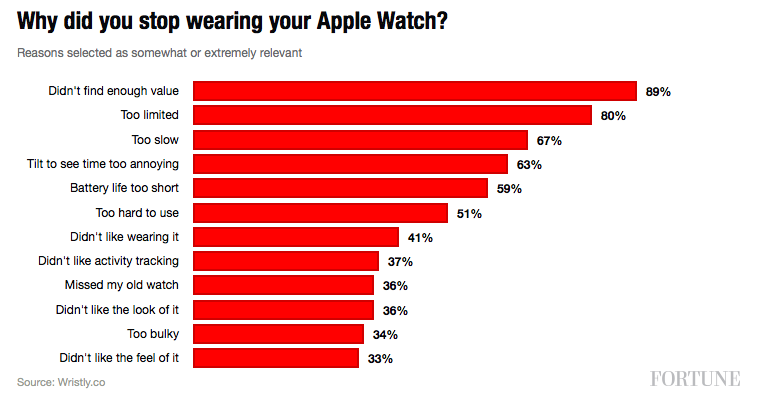 When he talks about the Apple Watch, Tim Cook likes to cite the 97% user satisfaction results from Wristly, a Web-based research firm that conducts weekly surveys of Apple Watch owners. He may not be as happy with this week’s report—the first formal survey of dissatisfied customers.

Thanks in part to readers here, Wristly was able to assembly 340 people who bought an Apple Watch and—for one reason or another—stopped wearing it.

What were those reasons?

The chart above ranks the answers suggested by Wristly’s questionnaire. My pet peeve, the tilt-to-view-time feature, which works haphazardly at best, was the fourth most cited.

Respondents were also encouraged to add their own comments, and 300 of them did. Creative Strategies’ Ben Bajarin, who helps design Wristly’s surveys, read them all.

“The biggest theme in the critiques was about performance,” he wrote Monday in a Techpinions post. “Many thought the Apple Watch was too slow, particularly around data retrieval and third party apps. The other was about battery. Many commented on their desire to have the watch face be visible at all times and not have to charge daily.”

.
The fact that so many dissatisfied customers held on to the Watch may be instructive. As Bajarin notes, wearables in general and smartwatches in particular represent new categories, and everybody—not just Apple (AAPL)—is still trying to understand what these devices are good for.

He also notes that there was a heavy negative bias in the survey from people who work in the industry. “In this panel, like many others we have run, the most critical and less satisfied Apple Watch owners are the ones who work in tech, evaluate tech for a living, or are fairly technical.”