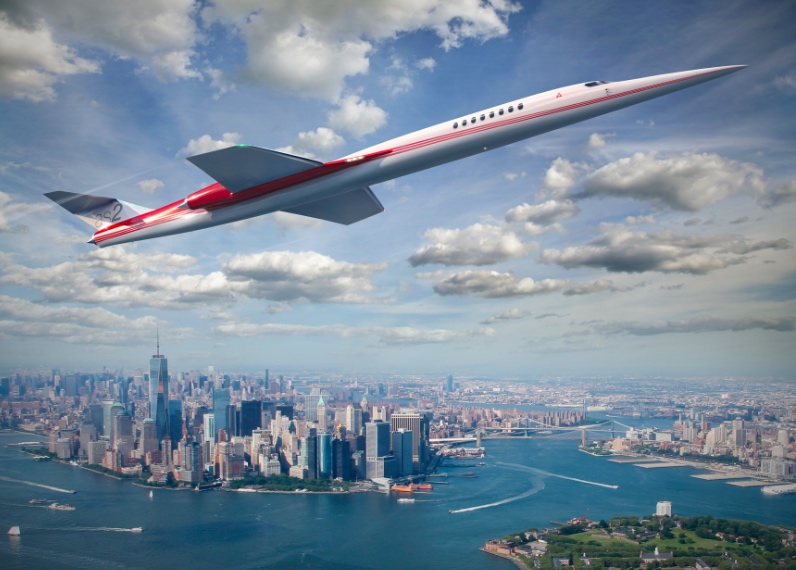 After 13 years of developing a high-speed business jet on paper, billionaire-backed Aerion Corporation is a big step closer to making supersonic passenger travel a reality again. The company—funded by both Texas billionaire Robert Bass and European aerospace giant Airbus—just inked its first order for 20 of the $120 million jets.

If Aerion can execute an ambitious timeline unveiled last week, its AS2 could be in the air in just five years, with first commercial deliveries beginning in 2023. That would make the jet the first passenger aircraft designed for trans-sonic travel—at speeds both above and below the sound barrier—since the retirement of the iconic Concorde in 2003.

The Concorde ferried passengers at roughly twice the speed of sound, or roughly 1,300 miles per hour, shaving hours off the average trans-Atlantic passage (it once flew New York to London in just under three hours). But the economics of the aircraft were a nightmare. It carried a quarter of the passengers as a typical Boeing jumbo jet while burning through twice the fuel, and regulations restricting ear-splitting sonic booms in American and European airspace limited it to trans-oceanic routes. High operational costs—translating into high ticket prices—eventually rendered the jet unsustainable.

With the AS2, Aerion believes it has engineered a clever work-around for companies and individuals that want to take advantage of supersonic intercontinental flight as well fast subsonic intra-continental travel. The AS2 would cruise efficiently at speeds just below the sound barrier while over land as well as at roughly Mach 1.5—or one-and-a-half times the speed of sound—over the ocean (at sea level sound travels about 750 miles per hour). Capable of carrying between eight and 12 passengers up to 4,750 nautical miles at supersonic speeds, the AS2 could trim three hours off a transatlantic flight and more off longer trans-Pacific routes, the company says.

A partnership with Airbus announced last year gave Aerion’s concept a major boost in both credibility and technical know-how. Under the agreement, Airbus will provide both components and technology as well as its expertise in bringing an aircraft from drawing board to commercial market, says Jeff Miller, an Aerion spokesman.

That backing has proved enough to lure Aerion’s first customer to the table. Flexjet, a company that sells fractional ownership and leasing of private aircraft, placed an order for 20 of Aerion’s AS2 jets last week—the first firm order for the yet-to-be-built aircraft. Flexjet anticipates demand among its clientele for intercontinental round-trip travel in a single day. The AS2 could provide the necessary speed and comfort, company execs say.

In the early going Aerion expects most of its customers to fit a similar profile—either high net worth individuals or charter operators that cater to well-heeled companies and individuals. The AS2 makes a lot of sense for head-of-state travel or high-level corporate travel, Miller says, because of the time it can save in the air. It might not make as much sense for corporations to own the jets outright, at least not at first, he says. But Aerion expects corporate customers will follow as supersonic jet travel becomes more mainstream again.

Of course, first Aerion has to build, test, and certify the AS2. The timeline unveiled last week calls for first flight of a test aircraft in 2021. The company and its partners at Airbus are currently choosing the location for Aerion’s final assembly site and plan for construction to start in 2018. Aerion declined to disclose a list of potential sites, but Miller says its factory will be in the U.S. and—given the nature of sonic boom restrictions over land—likely in a coastal region.

The real question for Aerion now isn’t whether the company and it’s partners at Airbus can actually build and fly their AS2, but whether they can beat the bad economics of supersonic passenger flight that grounded the Concorde. While there’s little doubt the AS2 can improve on the inefficiencies of the supersonic jetliner, its less clear if there’s a large enough market for a supersonic passenger jet that costs twice as much as something like a Gulfstream G650—generally a top aircraft in the private jet market—while flying only 50% faster, and then only some of the time.

Aerion and Airbus think so. The company does not disclose its financials, and therefore it’s difficult to determine how many $120 million AS2s the company will need to sell after 2023 to turn a profit. If the demand does exist, however, Aerion and Airbus could find themselves pioneering the return to supersonic passenger flight.

For more on the private jet industry, watch this Fortune video.