This is the IPO You Missed Today 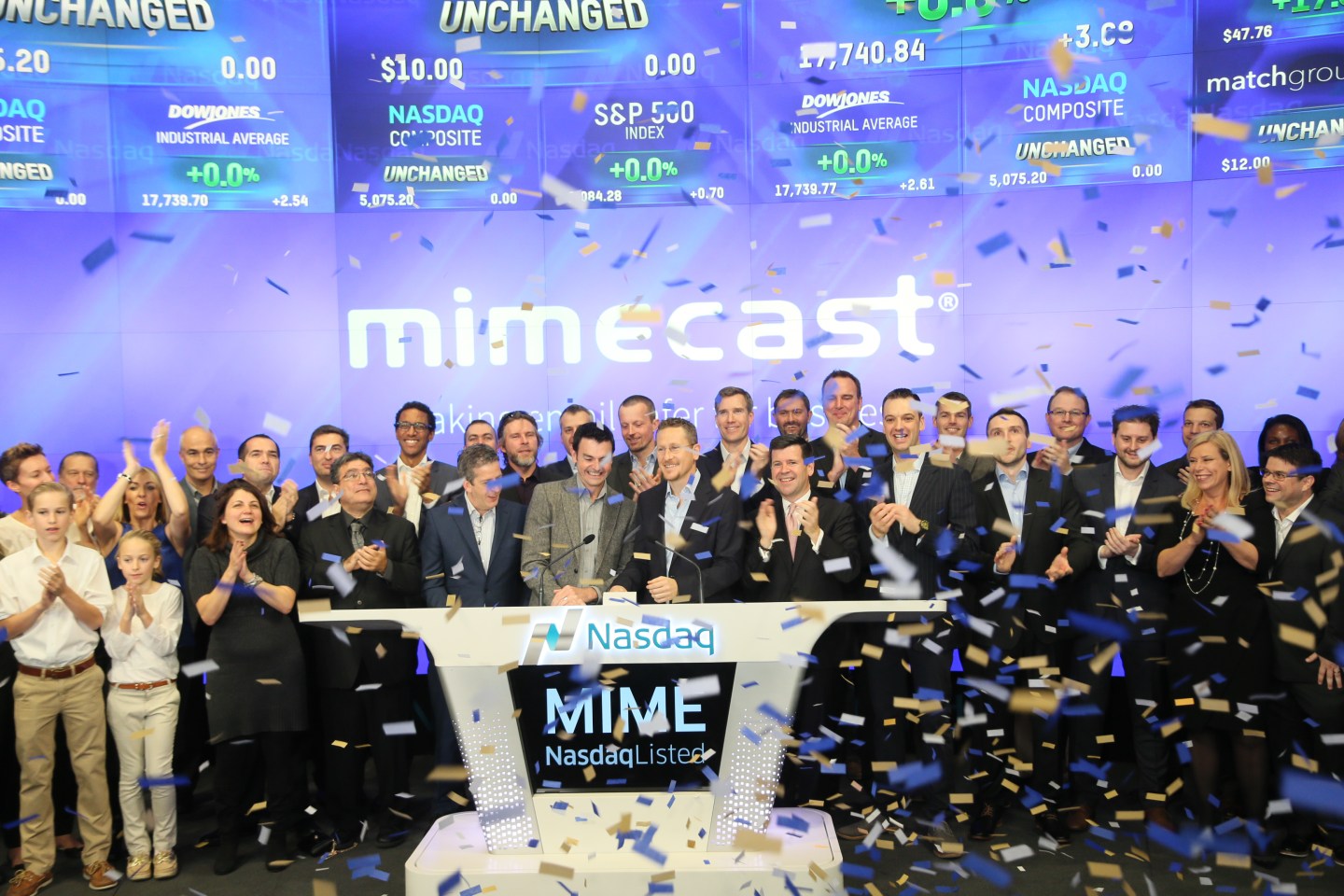 The name’s Mimecast (MIME), a cloud-based email management and security company that is headquartered in London. The firm’s stock debuted on NASDAQ on Thursday, pricing its 7.8 million shares at $10 each—the low end of an expected range that extended to $12.

After reaching $11.90 within the first hour of trading Thursday, the share price fell near to the original $10 price (as of the writing of this post).

Fortune asked Peter Bauer, the company’s co-founder and CEO, how he felt taking his firm public on the same day as the hotly anticipated companies Square (SQ) and Match Group (MTCH). The latter, the parent of online dating company of Tinder and OkCupid spun, out from media mogul Barry Diller’s InterActiveCorp (IAC).

“We’re thrilled to be on the same stage as them,” he said. “I get quite a kick out of taking the company public on the same day that Jack Dorsey’s taking his company public,” referring to the CEO who leads both Square and Twitter (TWTR). “It’s wonderful to be able to share a bit of the spotlight with the other high profile IPOs.”

Mimecast, founded in 2003, sells its software services to roughly 15,200 organizations across the globe, mostly in Europe, North America, and South Africa. NetSuite (N), ZenDesk (ZEN), and Tableau (DATA) are among its customers.

Revenues for the fiscal year ended in March grew by nearly a third to $116.1 million. During that time, Mimecast earned a slight profit of about $300,000, although it posted a net loss of $100,000 in the six months following.

The company’s name derives from MIME, or “Multi-purpose Internet Mail Extensions,” the Internet protocol that lets email correspondents exchange various types of data, including photos, video, and audio. In fact, the company’s chief scientist, Nathaniel Borenstein, is a pioneer of the technology, having helped co-create the protocol in the ’90s. He holds the distinction of being one of the first people ever to send an email attachment in 1992. (The file in question was an audio recording of his barbershop quarter, the Telephone Chords, singing about bits and bandwidth. And yes, it’s way more delightful than that hallmark “You’ve got mail” notification AOL used back then.)

“What the development of that standard meant for the world was that instead of emails just being like blank postcards, they became like envelopes and could have attachments and carry files inside them,” Bauer told Fortune. “The MIME standard made that interoperability possible and work all around the Internet.”

He added: “One thing we’re celebrating today is standing on the shoulders of the giants who created email. Now we’re making safer and better Internet applications today.”

Prior to raising roughly $77.5 million in the IPO, Mimecast had raised $95 million in three rounds of funding from investment firms Insight Venture Partners, Index Ventures, and Dawn Capital. The company has more than 600 employees in nine offices, the newest of which is in Australia.

Mimecast’s IPO followed two other big cybersecurity IPOs this year: Rapid7 (RPD), an IT security firm based in Boston, Mass., in July; and Sophos (SOPH), a UK-based software and hardware security firm, in June. Other cybersecurity firms that appear poised for a debut on the public markets in the coming year include Veracode, Bit9 + Carbon Black, LogRhythm, and Okta.

“Email has been an Achilles heel in so many cyberattacks lately,” Bauer said. “It’s an underinvested area.”

For more on IPOs, watch the video below.