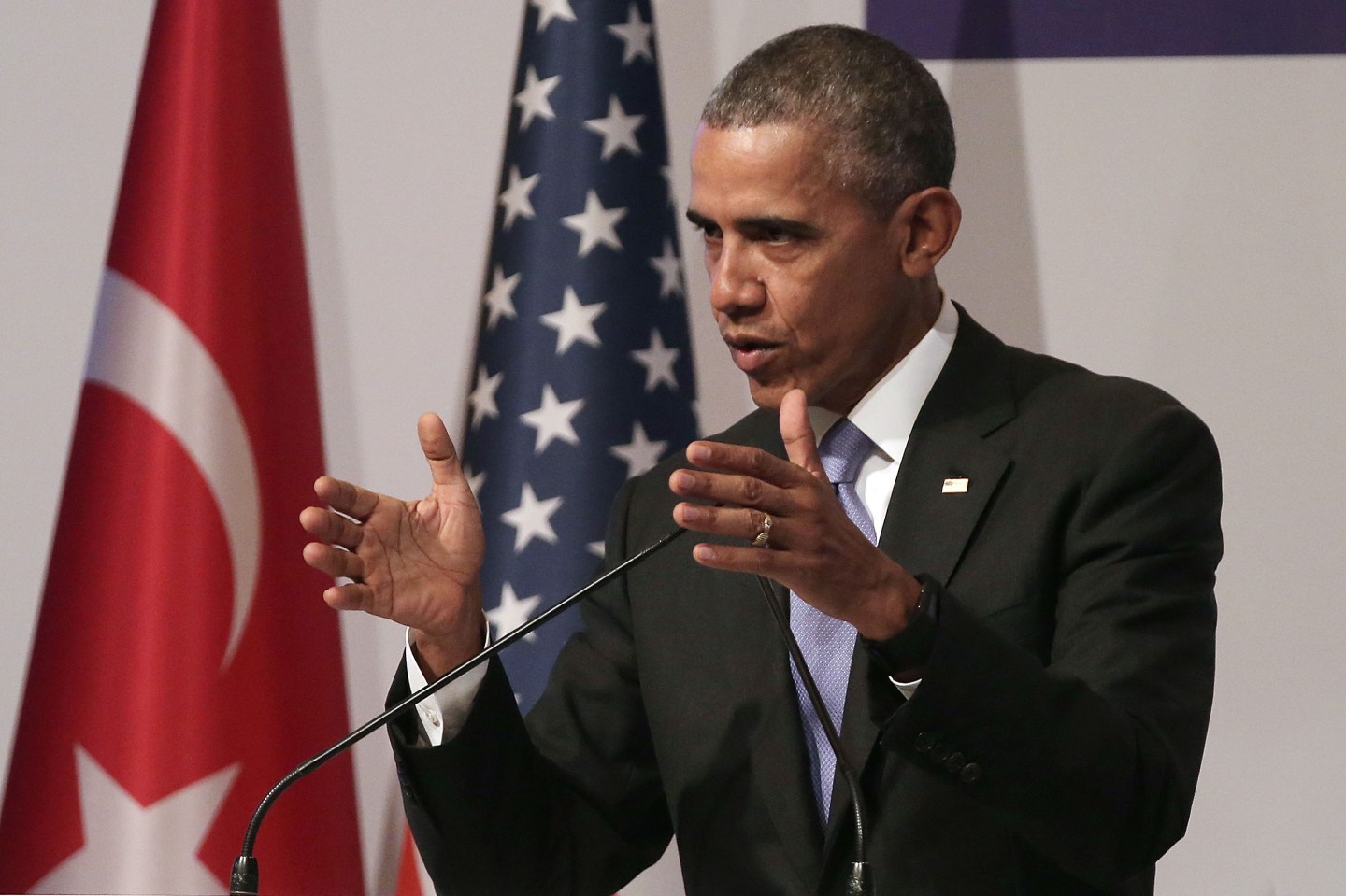 ANTALYA, TURKEY - NOVEMBER 16: U.S President Barack Obama speaks to the media during his closing press conference on day two of the G20 Turkey Leaders Summit on November 16, 2015 in Antalya, Turkey. World leaders will use the summit to discuss issues including, climate change, the global economy, the refugee crisis and terrorism. The two day summit takes place in the wake of the massive terrorist attack in Paris which killed more than 120 people. (Photo by Chris McGrath/Getty Images)
Photograph by Chris McGrath—Getty Images

In the wake of the Paris terror attacks, a group of Republican governors are vowing not to accept Syrian refugees. But there may not be much they can do if President Barack Obama pushes through with his plan to resettle thousands of Syrians over the next year.

The power over immigration under the Constitution rests with the federal government — a point the American Civil Liberties Union and advocates for refugees made on Monday.

It violates the Constitution for a governor to bar an entire group of refugees from coming into their states because of their nationality.

The governors of states from Texas to Alabama to Michigan to Georgia announced their intention to refuse refugees, but they won’t actually be setting up border checkpoints and demanding papers. Instead, they’ll refuse state assistance for relocating the refugees.

That could lead to lawsuits if, for example, states refuse to issue driver’s licenses to those who have been granted asylum by the federal government.

The real battle will be in Congress. Florida Governor Rick Scott made this quite clear in a letter sent on Monday to newly minted House Speaker Paul Ryan and Senate Majority Leader Mitch McConnell:

“It is our understanding that the state does not have the authority to prevent the federal government from funding the relocation of Syrian refugees to Florida even without state support,” Scott wrote. “Therefore, we are asking the United States Congress to take aggressive and immediate action to prevent President Obama and his administration from using tax dollars” to accept Syrian refugees “without an extensive evaluation of the risk these individuals may pose to our national security.”

On Monday, Ryan said during a radio interview that he had already asked his committees to see what Congress should do to protect the nation from the threat and to make sure the country would not accept terrorists as part of the refugee rescue program.

The issue could lead to a shutdown showdown if Republicans attempt to defund the refugee program in a bill required to keep the government open past December 11.

In the Senate, Jeff Sessions of Alabama proposed defunding the Syrian refugee program unless Congress separately votes to authorize it. Sessions also wants President Obama to outline how much it would cost to provide lifetime benefits to those refugees and propose how to pay for it.

“For the same cost of providing benefits to one refugee in America, vastly more refugees could be helped by establishing safe-zones in Syria or surrounding countries until displaced persons can be safely returned home,” Sessions said in a letter to his colleagues.

Republican Congressman Brian Babin of Texas had proposed a bill to block the refugee plan back in July. He said he’s circulating a letter to defund it and is already gathering signatures. “It’s absolutely imperative that we stop this foolishness,” he said on Fox News Monday afternoon.

Also on Monday, President Obama, in Turkey for the G20, lambasted Republican politicians — although not by name — for opposing the acceptance of non-Christian Syrian refugees — in what appears to be a dig at Sen. Ted Cruz.

“When I hear political leaders suggesting that there would be a religious test for which a person who’s fleeing from a war-torn country is admitted, when some of those folks themselves come from families who benefitted from protection when they were fleeing political persecution — that’s shameful,” he said. “That’s not American. That’s not who we are. We don’t have religious tests to our compassion.”

Obama said the refugees “are the most harmed by terrorism, they are the most vulnerable as a consequence of civil war and strife.

“They are parents, they are children, they are orphans. And it is very important … that we do not close our hearts to these victims of such violence and somehow start equating the issue of refugees with the issue of terrorism. The United States has to step up and do its part.”

Cruz, a son of Cuban immigrants, said in South Carolina later on Monday that it would be “absolute lunacy” to bring thousands of Syrian Muslims to the United States.

The Obama administration has emphasized that Syrian refugees entering the U.S. will undergo extensive security checks.

Despite the governors’ opposition, “the administration remains steadfastly committed to the President’s plan to resettle at least 10,000 Syrian refugees in the United States in FY 2016,” an official said. “The administration made this decision only after concluding that we can do so safely, consistent with our national security.”

The Obama administration said that over 180 cities and towns have signed on to welcome refugees, and added that they will continue to consult with states to allay any concerns they may have and are confident they can move forward with the plan.