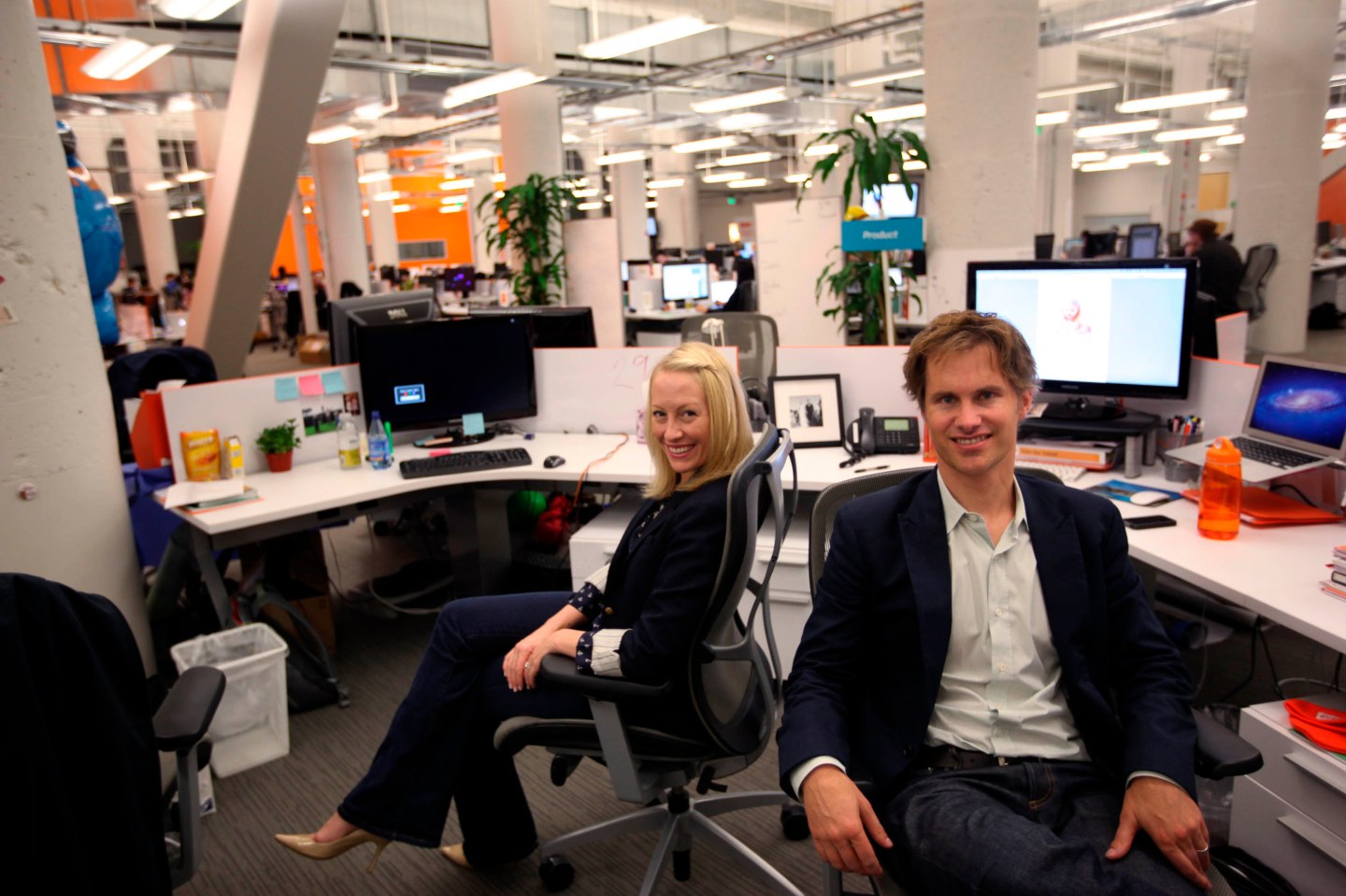 Eventbrite CEO Kevin Hartz and his wife, Julia, president of the company, pose for a photograph at Eventbrite headquarters in the South of Market area in San Francisco, California May 25, 2012. More than ever, technology entrepreneurs, and their investors and employees, are choosing the urban charms of San Francisco over the sprawl of neighboring Silicon Valley. In the South of Market district, the nexus of the city's tech industry, rents are soaring and latte lines are lengthening - conjuring memories of the dot-com bubble of the late 1990s. Picture taken May 25. To match Feature SANFRANCISCO-SILICONVALLEY/GEEKS REUTERS/Robert Galbraith (UNITED STATES - Tags: BUSINESS SCIENCE TECHNOLOGY) - RTR32X5I
Photograph by Robert Galbraith — Reuters

Knowing when to leave is a difficult decision, especially for founding CEOs. Often, it’s a choice that is made for them—usually by a board that believes another CEO can do better. Every once in a while, though, founders are pushed into it not by an unhappy board but by a much more fickle and hard-to-predict force: life and the many curve balls it throws at us.

In a memo to employees sent out Thursday morning, ticketing service Eventbrite’s co-founder and CEO Kevin Hartz announced that he will take a temporary leave from his chief executive responsibilities. The reason? He is battling a “non-life threatening medical condition.” (Hartz declined to go into details about the exact ailment, asking for privacy.)

“It’s been a challenge for a number of months,” the entrepreneur told Fortune in an exclusive interview. “But it’s the right thing to do and the right time to step out and get healthy. We’re in great hands with the rest of the team to execute on our plans.”

The rest of the team is his wife and Eventbrite co-founder and president, Julia Hartz, along with the company’s chief financial officer, Mark Rubash, and its vice president of strategy, Randy Befumo. The trio, headed by Julia Hartz, will run the “CEO’s office” while the former chief executive, who will maintain his role as executive chairman of the company’s board, rests and recovers.

“There’s really this advantage of us working together for 10 years,” says Julia Hartz.

Indeed, Eventbrite is coming up on its 10-year anniversary at the same time its co-founders are about to hit 10 years of marriage (the couple also has two kids, and Kevin Hartz says it’s a silver lining that he will now get to spend some more time with them).

The San Francisco-based company, recently valued at more than $1 billion, has been in steady growth for several years. By end of 2015, it will have helped sell tickets for and spread the word about more than 2 million events across 180 countries annually.

But Eventbrite hasn’t seen the kind of meteoric rise of some Valley companies in recent years. That might not be a bad thing, says investor and board member Roelof Botha, a longtime partner at venture capital firm Sequoia Capital. Why? Because it might help protect the company from an equally quick crash. “The value of live experiences has gone up dramatically,” says Botha. “And Eventbrite has been able to experience wonderful, sustainable growth.”

Still, Hartz’s departure comes at a critical time for the company. After years in the business, some kind of exit is likely to be in the works.

Botha, who calls Kevin Hartz a close personal friend, says there are two possible options when a CEO has to make a sudden and temporary departure: You either bring in an outside executive or organize an office of the CEO made up of members of the existing management team. In this case, the No. 2 at the company not only knows the inner workings of the company, she also knows the CEO pretty well. The other two execs who will round out the tri-headed CEO’s office at Eventbrite have been with the company since 2013.

“It is a wonderful symbol of strength and collaboration,” Botha says of the group.

In his memo to Eventbrite’s employees (they call themselves “Britelings,” Kevin Hartz said he intends to return to the company in about six months. For more, see his full email to employees below.

I have an important personal update to share with the Briteling community. For the past few months, I’ve been attempting to recover from a curable, non-life threatening illness and at the same time fulfill my duties as CEO. Over the next few months, however, my energy needs to be focused on recovering and returning to optimal health and Eventbrite deserves fully dedicated leadership.

To that end, I’m temporarily stepping away from my role as CEO and will return to the same position once I’ve fully recovered. While these things cannot be forced to a timeline, I expect to return in two quarters. In the meantime, I will remain engaged in the business by continuing to serve on our Board of Directors as Executive Chairman.

Earlier this week, I recommended — and the Board of Directors approved — the way in which the CEO role would be filled during my temporary leave. Effective immediately, we have created an Office of the CEO that includes Julia, who will have final decision-making authority and oversee marketing, customer support, sales, and Briteling experience; Mark who as CFO will continue to oversee all of finance and legal; and Randy, as VP of strategy, will also oversee product, engineering and the consumer lab initiative.

As I step away, Eventbrite’s business is stronger than ever. We serve hundreds of thousands of event organizers who rely on us to help them sell their experiences to tens of millions of active consumers. We are operating at the top of our game and are on a path to profitability. And, we have a deep, talented, and experienced management team and board who are fully prepared to lead during my absence.

I know you might have some questions, so we will be holding an All Hands meeting at 11:30am PT in the kitchen today which will also be livestreamed to the remote offices. I hope you can join us.

I couldn’t take this time to focus on my health without knowing that we have a great global team who makes our business stronger each day. The Board and I have complete confidence that this team will continue to successfully execute against the business plan and drive our performance in 2016.

Thank for your support, hard work and commitment to Eventbrite’s success. I look forward to returning to a thriving team and company next year.