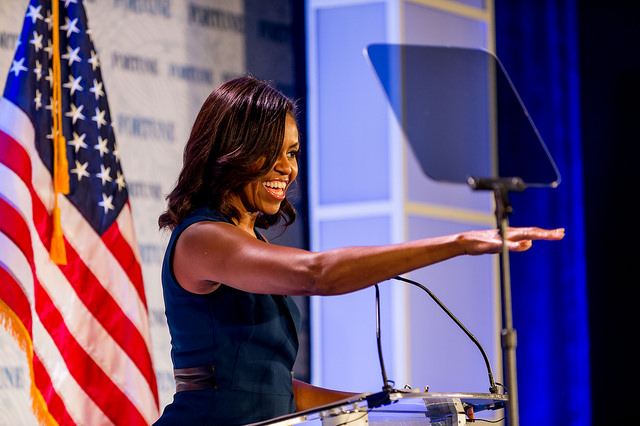 Speaking at a Veteran’s Day lunch at the Vice President’s residence in Washington, D.C., First Lady Michelle Obama had nothing but praise for the female service members and family in attendance. Well, almost nothing.

“You all are awesome. It is just an honor to be able to lift you up and shine a light on all the great work you’re doing for this country—so try not to be too bashful,” said Obama, after noting that many of the women seemed a bit uncomfortable being honored so publicly.

“That gave me chills,” said Dr. Jill Biden, wife of the Vice President, who introduced the pair. “What an incredible accomplishment for anyone, man or woman.”

Biden also commended the efforts of the military’s Female Engagement Teams and their predecessors Team Lioness, female soldiers deployed in Iraq and Afghanistan to make connections with and gather intelligence from local women.

Obama and Dr. Biden hosted the luncheon in partnership with Lifetime and A+E Networks. On Monday, Lifetime aired Women of Honor, a one-hour documentary special featuring three female members of the military. One of those women, company commander Rolona Brown, was on hand to introduce the First Lady.

Brown first joined the army at age 18, took time off to raise her son, then reenlisted in 2002, serving in Iraq. In her introduction of Obama, she focused on the role of resilience in the lives of military families, and on the importance of providing education and employment to support to veterans and their families to allow them to foster that resilience.

Obama praised Brown and the other women from the special for being “so brave and so open” in sharing their stories. “[The documentary] is truly going to change the way this country sees our military,” she said. The First Lady also tipped her hat to businesses hiring military members, city governments working to end homelessness for veterans, and state legislatures that have made it easier for the military spouses to find work when they’re required to relocate.

Yet there’s much more to be done, said Obama: “We’re going to keep on working to make sure that you and your families get the support you need. That’s our vow to you—while we’re here in the White House and long after we’re gone.”

The Vice President was the last to address the luncheon crowd—after making time for dozens of selfies and even talking to one service member’s mom by cell phone. He thanked the women in attendance for blazing a path for those who will follow them. “Thank you on behalf of my granddaughters,” he said. “There’s not a single thing in life that a man can do that a woman can’t do.”

Biden concluded his remarks by remembering the men and women who have been killed and injured in the line of duty, and reminding the crowd of our “one true sacred obligation: to equip those we send to war and to care for them and their families when they come home.”

Finally, he tearfully invoked the memory of son, Beau Biden, a member of the Delaware Army National Guard, who died of brain cancer earlier this year. “The proudest thing he ever did was wear the uniform,” said the Vice President.