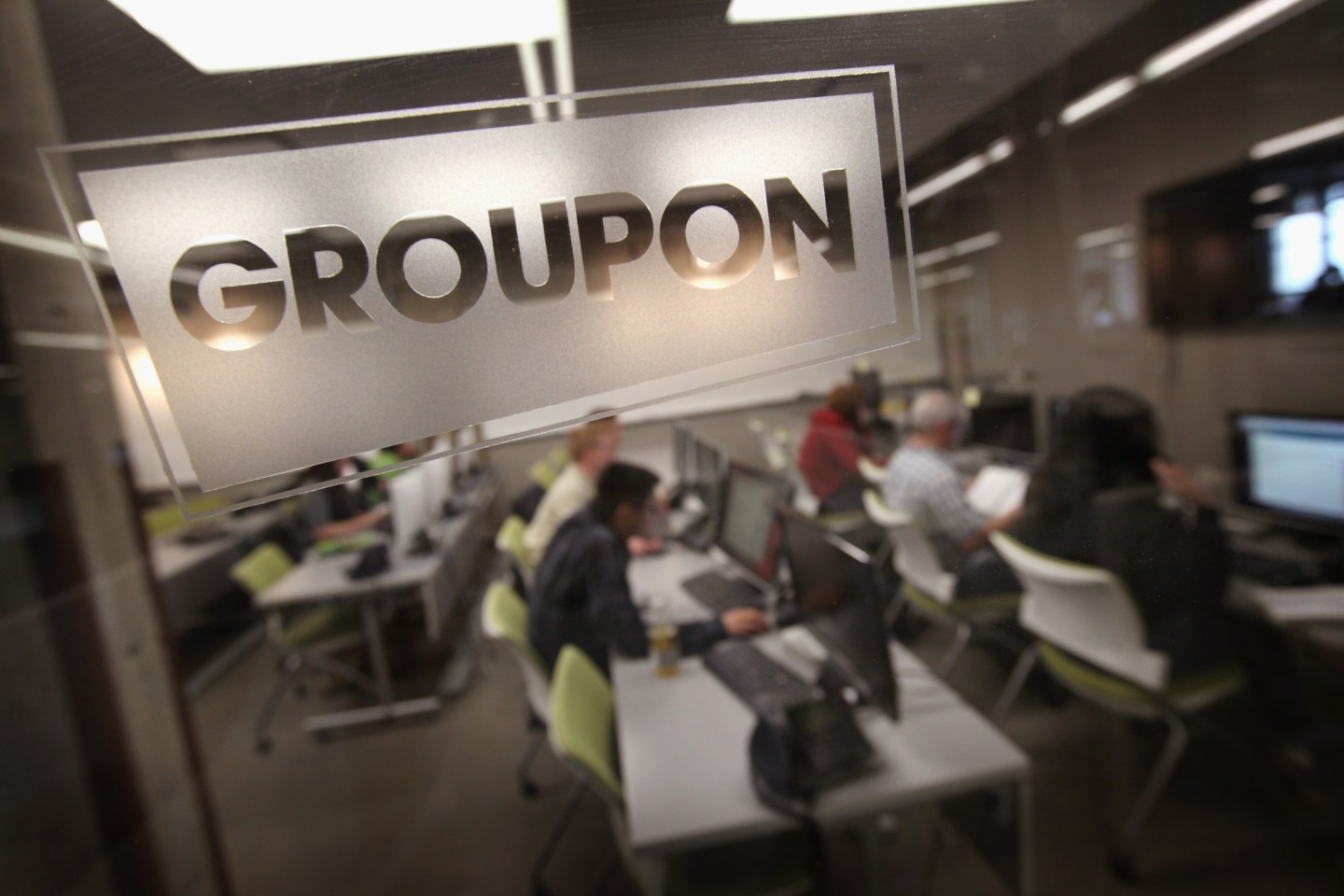 Caption:CHICAGO, IL - JUNE 10: The Groupon logo is engraved in a glass office partition in the company's international headquarters on June 10, 2011 in Chicago, Illinois. Groupon, a local e-commerce marketplace that connects merchants and consumers by offering goods and services at a discount, announced June 2 that it had filed with the Securities and Exchange Commission for a proposed initial public offering of its Class A common stock. The company, launched in Chicago in November 2008 now markets products and services in 43 countries around the world. (Photo by Scott Olson/Getty Images)
Photograph by Scott Olson — Getty Images

Groupon’s share price (GRPN) is down sharply today, sinking below $3 per share as investors react to news of a new CEO and weaker-than-expected guidance.

The daily-deals site has seen its stock price drop 65% so far this year, and now will have to deal with negative market sentiment after the company said it expects revenue of between $815 million and $865 million for the current quarter, shockingly far from the average analyst estimate of $956 million as compiled by Bloomberg. Investors seem to be itching to leave the fold, with 8.1 million shares traded in the pre-market hours today, representing 126.5% of its average daily volume.

Groupon’s issues have been growth-related: not enough new customers are coming to the coupon marketplace, and the company is struggling to compete in an e-commerce environment that includes the likes of Amazon (AMZN) and eBay (EBAY). “Groupon is now saying, ‘OK, we need to grow new customers,’ and they’re investing more in it, and people are concerned that money will go to waste because there’s too much competition,” Sameet Sinha, an analyst at B Riley & Co, told Bloomberg.

The company, as we’ve detailed before, could also be a victim of undue expectations placed on one of the first “unicorns,” as it was valued at more than $1 billion by venture capitalists less than two years after its founding.

In response, the company is cutting 1,100 jobs worldwide, and on Tuesday it named a new CEO in Rich Williams, the company’s previous COO and president of North American operations. Williams alluded to the need to ramp up customer acquisitions and to shed the fat around the global operations of Groupon and their product offerings in his conference call with analysts, saying the company has been held back by a “fragmented international” business, and would be spending around $200 million more on marketing.

The appointment of Williams could also see the company shifting a majority of its resources into its promising U.S. unit. In its third-quarter earnings report, revenues from the North America division saw a 10.9% increase from the previous year, even though overall sales declined by 0.09% to $713.6 million, missing the average estimate of $733 million.