Is Amazon’s Brick-and-Mortar Store A Facade For E-Commerce? 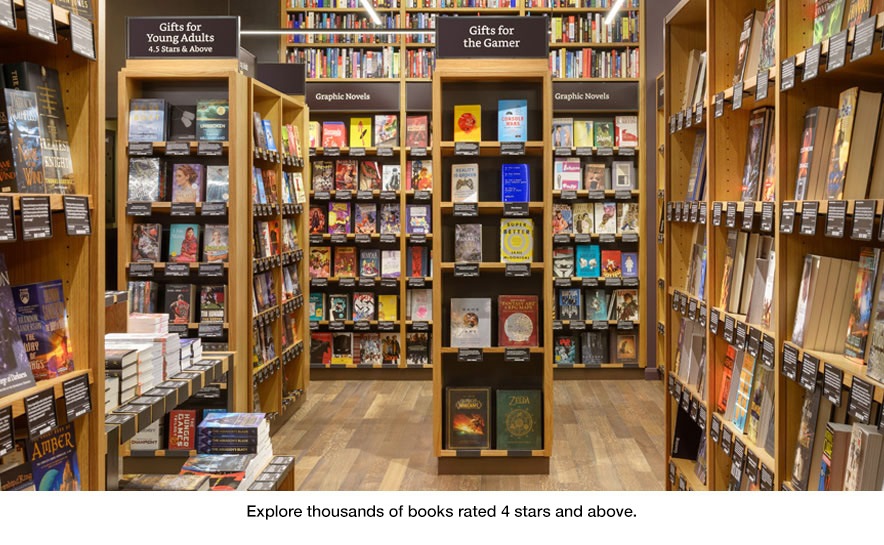 Amazon (AMZN) has launched a new brick-and-mortar bookstore, but did it actually leave its heart in the web?

Dubbed Amazon Books, the new retail store is open at University Village in Seattle. In an announcement on Tuesday, Amazon Books vice president Jennifer Cast called the store “a physical extension of Amazon.com,” adding that the company has used the knowledge it’s gained over the last two decades about consumer tastes to create a desirable in-store shopping experience.

“The books in our store are selected based on Amazon.com customer ratings, pre-orders, sales, popularity on Goodreads, and our curators’ assessments,” Cast wrote in the announcement. “These are fantastic books! Most have been rated 4 stars or above, and many are award winners.”

The ideas brought forth in Amazon Books are novel—such as review cards for each title that feature an aggregate of Amazon.com user ratings and a critic’s review—but industry experts believe the store is more interesting in what it’s attempting to achieve: to drive online sales through a brick-and-mortar presence.

“Amazon is laser focused on driving online sales,” says Josh Lowitz, partner at Consumer Intelligence Research Partners. “They effectively invented and have continued to perfect the model online store, so anything they do in retail should be seen as a way to further their lead as the premier online retailer.”

Sucharita Mulpuru-Kodali, an analyst at Forrester Research, says it may be too early to know for sure what Amazon’s intentions are with its bookstore, but signs seem to point towards positively impacting its online presence.

“Physical books aren’t a growing sector so I don’t think they have a high bar for the number of books they sell,” Mulpuru-Kodali says. “But they’ll learn a lot about how consumers discover products and if shoppers buy on the website, that’s icing on the cake. I’m sure they’ll also learn if a store makes a customer more loyal to Amazon or more likely to spend with Amazon. Those are really useful things to know.”

Amazon noted that all of the books (and hardware) that it sells in-store will be available for the same price as online. Running a full brick-and-mortar store with online pricing is difficult, to say the least, given the extra overhead that goes with running a store. Barnes & Noble (BKS), for instance, has about 650 stores and has been closing approximately 20 locations per year over the last several years.

Perhaps, then, Amazon Books is a type of showrooming, attempting to get people in-store to learn more about Amazon and the products it sells and eventually buy yet more products online.

“We don’t know if Amazon is going to try to make money with physical stores, but they absolutely want to enhance the company’s brand with them,” says Lowitz. “Beyond books, Amazon stores could serve as quick order pick-up locations to accompany their accelerated delivery options, and help customers whose apartment buildings are balking at the constant flow of Amazon boxes in their receiving rooms.”

Even Cast, who seems committed to getting people in-store, didn’t shy away from the possibility of customers coming to Amazon Books and leaving without a single product in-hand. Indeed, she offered online buying as a viable alternative for in-store customers.

“Walk out of the store with a book; lighten your load and buy it online (Prime customers, of course, won’t pay for shipping); buy an eBook for your Kindle; or add a product to your Amazon Wish List, so someone else can buy it,” Cast wrote in the statement.

If Amazon is trying to use Amazon Books for online engagement, it would stand in stark contrast to some of the other technology giants that have a presence in brick-and-mortar. Apple (AAPL), for instance, is rapidly expanding its retail footprint to provide another avenue for consumers to buy its products. Microsoft (MSFT), which opened its first flagship store in New York City last month, is following Apple’s lead.

“Apple and Microsoft stores sell product in person and sell the brand for ultimate sales online and through other retailers,” Lowitz says. “With the exception of some e-readers and tablets sold at other stores, Amazon is most interested in driving sales through their core online business. We think that any Amazon store will advance that cause.”

Still, it’s unclear how the economics of Amazon’s store works and whether the company is using it as a means to drive online sales or if Amazon truly wants to become an offline retail force. Amazon did not respond to a request for comment and details will likely remain scant until its next earnings call. What is clear, however, is that if the store achieves the e-commerce giant’s goals (whatever they may be), it’s entirely possible that more Amazon Books stores will crop up.

“We could certainly see Amazon Books expanding across the U.S. and internationally,” Lowitz says. “As big as Amazon has grown, there are still potential customers who are not familiar with Amazon, and the front door of a physical store is a great way to introduce them to all that Amazon has to offer.”

For information on Amazon and its future, check out the following Fortune video: