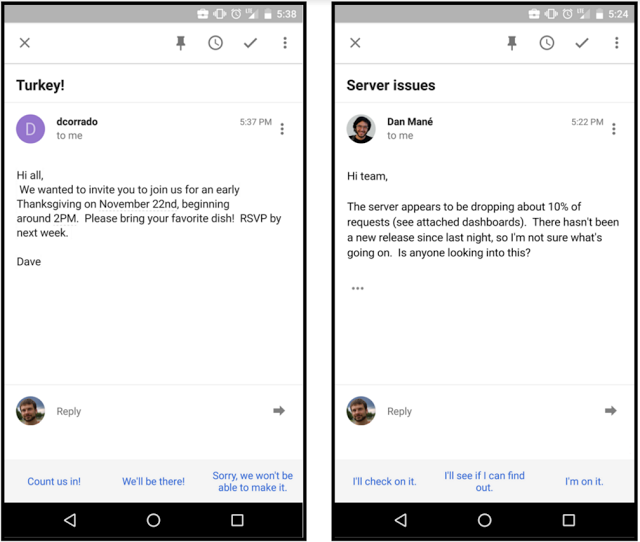 Later this week people who have the Inbox email program on their iPhones or Android devices will soon have a new option when it comes to replying to emails. Instead of coming up with their own responses on their mobile devices, they’ll get to choose between three options created by a neural network built by Google researchers. Google claims it has built an AI that can read incoming emails, understand them, and generate a short, appropriate response that the recipient can then edit or send with just a click.

The tool will launch “later this week” and is called Smart Reply. It’s designed so users can quickly get through their emails on a mobile phone where typing replies, and even dictating them, can be tedious. It’s also an example of how far Google has come with its deep learning efforts—which have so far helped it develop products such as Google Translate and better facial recognition across its photo products.

Google (GOOG), like many other companies including Facebook (FB), Apple (AAPL), and Microsoft (MSFT) are investing big bucks in developing better artificial intelligence as a way of helping consumers handle the information overload coming at them through their many connected devices.

Each of these companies sees their efforts as a competitive advantage in keeping consumers happy with their products, and also as a way to develop new services that tie consumers more tightly with their existing ecosystems. And doing so is a virtuous cycle. Every time a consumer interacts with a Google product, they are providing data that will feed back into the developing neural network to make it better.

In the case of Smart Reply, what Google has done is combine several systems to build a neural network that can read your email, parse what the words in the email mean, and then not only generate a response, but generate three different responses. This is more than just building out rules for common words that fall in an email. This is truly teaching a computer to understand the text of an email. It uses the type of neural networks found in natural language processing to understand what a person means and also generate a reply.

Compounding all of this is the issue of privacy. Because Google can’t let its researchers read your emails, it can’t actually check to see if its AIs are generating the right responses outside of the researchers’ emails. And once Google solved that problem, it found that its replies in many cases were variations on the same reply, which wasn’t really very helpful. The company had to build another neural network to teach the computer how to recognize semantically similar replies and discard those so it would come up with three different options for the user to choose from.

Finally it had a surprising issue in that one of the replies was almost always “I love you.”

Another bizarre feature of our early prototype was its propensity to respond with “I love you” to seemingly anything. As adorable as this sounds, it wasn’t really what we were hoping for. Some analysis revealed that the system was doing exactly what we’d trained it to do, generate likely responses—and it turns out that responses like “Thanks”, “Sounds good”, and “I love you” are super common—so the system would lean on them as a safe bet if it was unsure. Normalizing the likelihood of a candidate reply by some measure of that response’s prior probability forced the model to predict responses that were not just highly likely, but also had high affinity to the original message. This made for a less lovey, but far more useful, email assistant.

So if you plan on trying this out later this week know that not only did a lot of work and deep learning go into this effort to make your life a lot easier, but that apparently Google’s AIs so far are the opposite of Skynet. Instead of being trained to destroy us, they apparently want to respond with love.