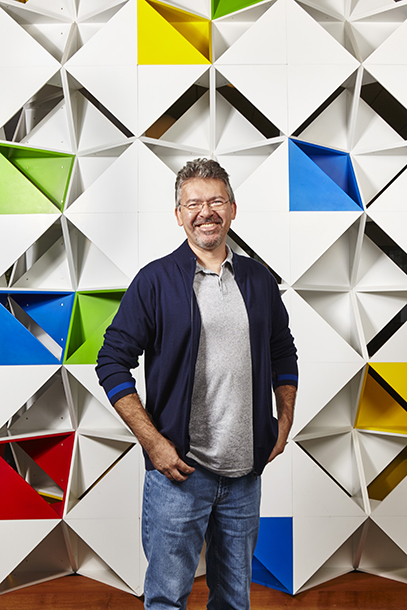 Google’s head of machine learning, John Giannandrea, has spent his professional life making computers smarter. But he’s not overly impressed with their current intelligence. “I think computers are remarkably dumb,” says Giannandrea, speaking in a stark conference room at Google’s headquarters in Mountain View, Calif. “A computer is like a 4-year-old child.”

Granted, that 4-year-old child has become crucial to the search giant’s competitive technology. Google (GOOG) is currently a leader in the searing-hot field of artificial intelligence, developing computers with the power to incrementally learn to perform tasks like recognizing patterns in numbers and words. HAL 9000 it is not, but machines learning to pick out granular information from big data (say, search terms) have vast implications for business in the Valley, now inching toward a future in which robots can read, drive, and, for all intents and purposes, think.

Giannandrea, 50, was born in Bridge of Allan, Scotland. His first attempt at humanizing machines was an early personal assistant at an Apple spin-off called General Magic in the ’90s. Its product looked like a smartphone primogenitor, but it fizzled in the pre-Internet era. Giannandrea went on to become the CTO at then Internet juggernaut Netscape. He later co-founded voice-recognition startup TellMe, which let users call a number for sports scores or even for a conversation with Santa Claus.

But word recognition, he realized, was just a small piece of the puzzle of computer-human interaction. In 2005*, Giannandrea founded Metaweb, which catalogued connections between not just words but objects. Google bought it in 2010.

Giannandrea often refers to Captain Kirk’s computer on Star Trek, which was capable of answering questions intelligently, as a motivating idea for his early projects. Once at Google, he spearheaded Knowledge Graph, which powers the box that pops up next to the search bar when you type in a query like “Sergey Brin’s net worth.” It uses machine learning and instantly searches databases to anticipate what you really want and combs the web to answer your question before you hit “submit.” Not quite starship Enterprise–caliber, but closer than most.

Google isn’t the only company plowing resources into AI—IBM’s Watson division is revolutionizing the field of cognitive computing—but its focus on the technology is growing. Currently more than 100 teams are working with the machine-learning group, up from only a handful a year ago. In 2015 the company’s machine-learning code consumed the most computing power of Google’s systems.

These days, one of Giannandrea’s big projects is self-driving cars, for which machine learning is used to detect pedestrians. But the “holy grail,” he says, is language understanding and summary. To get there, Google’s engineers will need to mimic the human mind, a system still far too complex for even the most elite supercomputer to comprehend—for now anyway.

*Editor’s note: An earlier version of this article misstated the date Metaweb was founded.