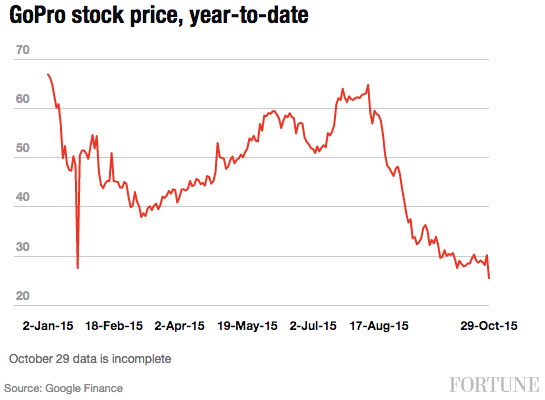 GoPro (GPRO) stock was down more than 16%, falling below $25 per share in early trading. Those losses come after the company reported third-quarter revenue that fell short of Wall Street’s expectations. GoPro said Wednesday afternoon that its revenue in the most recent quarter jumped 43% to $400 million, but that increase still came in below the company’s own guidance of at least $430 million in sales for the quarter.

GoPro also suffered a troubling 7% drop in revenue in the Americas, though the company did almost triple sales overseas.

GoPro also said it expects revenue for the current quarter to drop by 17% year-over-year, adding to analysts’ fears that the company’s sales have peaked. The company recently tried to spark greater sales of its Hero4 Session camera by lowering the price by $100, to $299, with CEO Nicholas Woodman admitting to analysts on Wednesday that the camera was originally priced too high.

The company’s shares are now down nearly 60% since the start of the year, as the market’s fears over the company’s ability to grow revenue continue to mount. Last month, Barron‘s predicted that GoPro’s shares would continue to decline as more competitors enter the market.