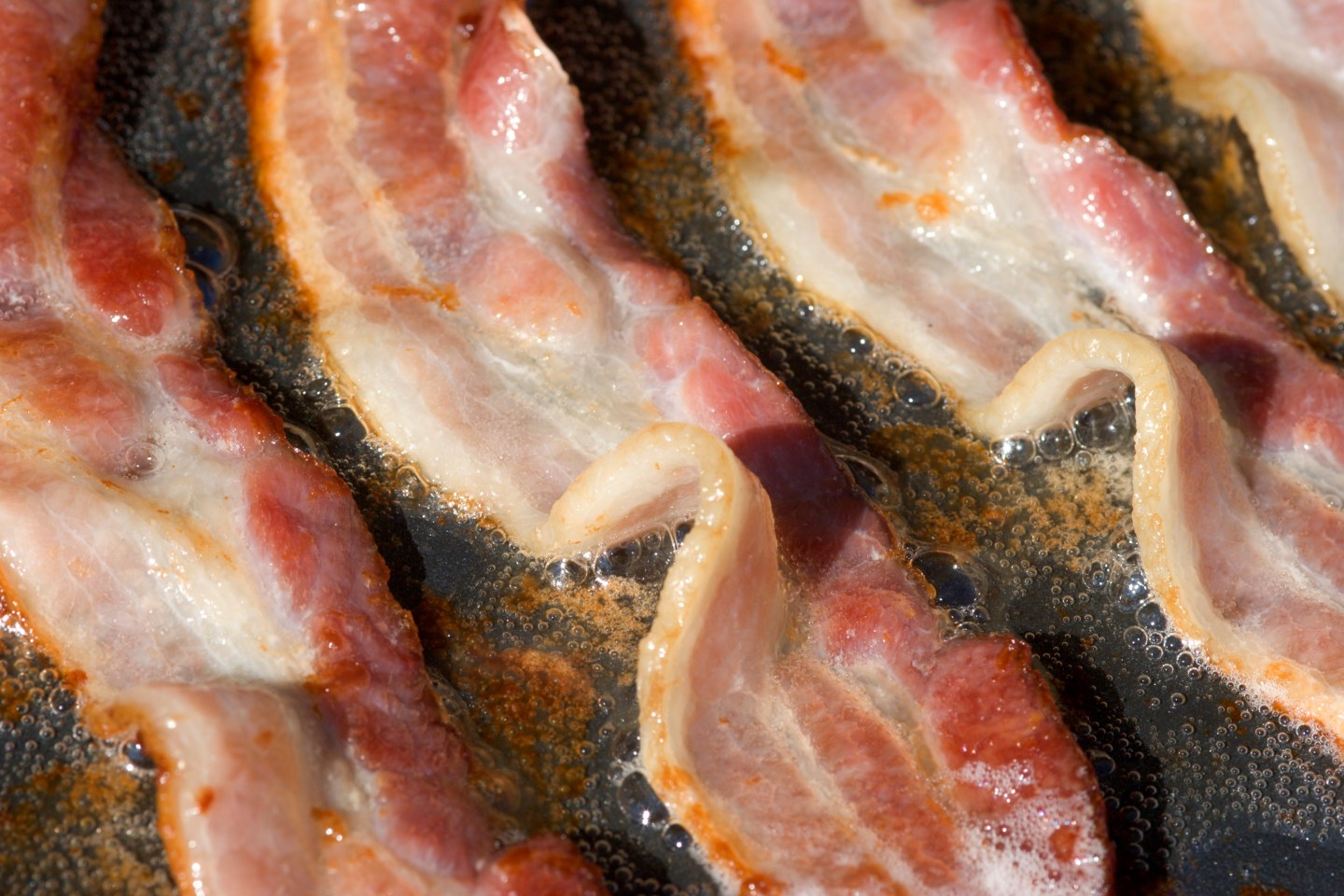 Bacon Frying On An Electric Griddle. (Photo By: MyLoupe/UIG Via Getty Images)
Photograph by Getty Images

The World Health Organization (WHO) announced on Monday that it has classified processed meat as a human carcinogen.

Red meat also was classified as a probable human carcinogen, according to the release by WHO’s International Agency for Research on Cancer (IARC).

The IARC evaluates substances suspected of causing cancer in humans, and arrives at its classifications by convening a working group of international experts to review and assess the strength and quality of the evidence—in this case, more than 800 studies. Although the meat classifications have no regulatory impact in the United States, they are likely to further intensify the already heated debate about meat-eating, which has made headlines since February, when the committee charged with updating the US Dietary Guidelines recommended that Americans should eat less meat.

It’s also possible that the classification could fuel lawsuits. Another recent IARC report, which classified the herbicide glyphosate as a probable human carcinogen, has prompted some law firms to seek out cancer sufferers who were exposed to the chemical, to file suit on their behalf.

The American meat industry, understandably, takes strong issue with any suggestion that meat is something consumers should eat less of. The North American Meat Institute (NAMI) immediately issued a statement declaring the classification as defying “both common sense and dozens of studies showing no correlation between meat and cancer and other studies showing the many health benefits of balanced diets that include meat.” In fact, many of the studies NAMI references do show correlations, but describe them as “inconsistent” or “weak.”

Like much of the research on how diet affects health, the research on the link between meat and cancer has enough ambiguity that it’s possible to cherry-pick a research list that supports either position, but many reviews of research on the best-established link between meat and cancer—colorectal cancer—find, as this 2014 review published in the American Journal of Clinical Nutrition does, that there is a convincing association between meat eating and colorectal cancer. The question, though, is whether the meat eating causes the cancer, or whether meat eaters, who are different from non-meat eaters in many ways, are eating or doing other things that put them at risk.

The National Cancer Institute’s position is that the preponderance of the evidence does find a correlation between meat consumption and cancer risk, but it cites inconsistent results and confounding factors as barriers to a definitive conclusion. “The evidence is inadequate” to determine whether eating less meat would cut colorectal cancer incidence, the group says.

In an interview with Fortune, Shalene McNeill, executive director of human nutrition research for the National Cattlemen’s Beef Association, acknowledged the association between cancer and meat, but pointed to those confounding factors as the culprit: “Red meat is being consumed in the context of an unhealthy diet,” she said, and pointed out that meat-eaters are more likely to smoke and be overweight. David Klurfeld, National Program Leader for human nutrition at the USDA and a participant in the IARC process, wrote in a recent paper that meat-eaters also exercise less, drink more, and eat fewer fruits and vegetables. Controlling for these things is a tricky business, and there are undoubtedly other behaviors, not included in the data, that can’t be controlled for at all.
[fortune-brightcove videoid=4575611199001]

The IARC acknowledges the difficulty of determining causality, but their report concludes that, “the consistent associations of colorectal cancer with consumption of processed meat across studies in different populations, which make chance, bias, and confounding unlikely as explanations.” On red meat, though, “Chance, bias, and confounding could not be ruled out with the same degree of confidence.”

In light of all this, it’s not surprising that scientists do not speak with one voice on this issue. Leaning toward the IARC position is Andrew Chan, an associate professor of medicine at Harvard Medical School whose research focuses on colorectal cancer prevention. “I think the evidence is reasonably supportive of that position,” he told Fortune of the IARC classification. He acknowledged that “many studies are flawed,” but nevertheless said that if you look at the preponderance of the evidence, the IARC conclusion is “a reasonable one.” He notes that the evidence for processed meat is stronger than that for red meat.

Tamar Haspel is a journalist on the food and science beat. She writes the James Beard Award-winning Washington Post column, Unearthed, and farms oysters off Cape Cod.