Apple’s earnings, baseball, and a Fed meeting — 5 things to know this week 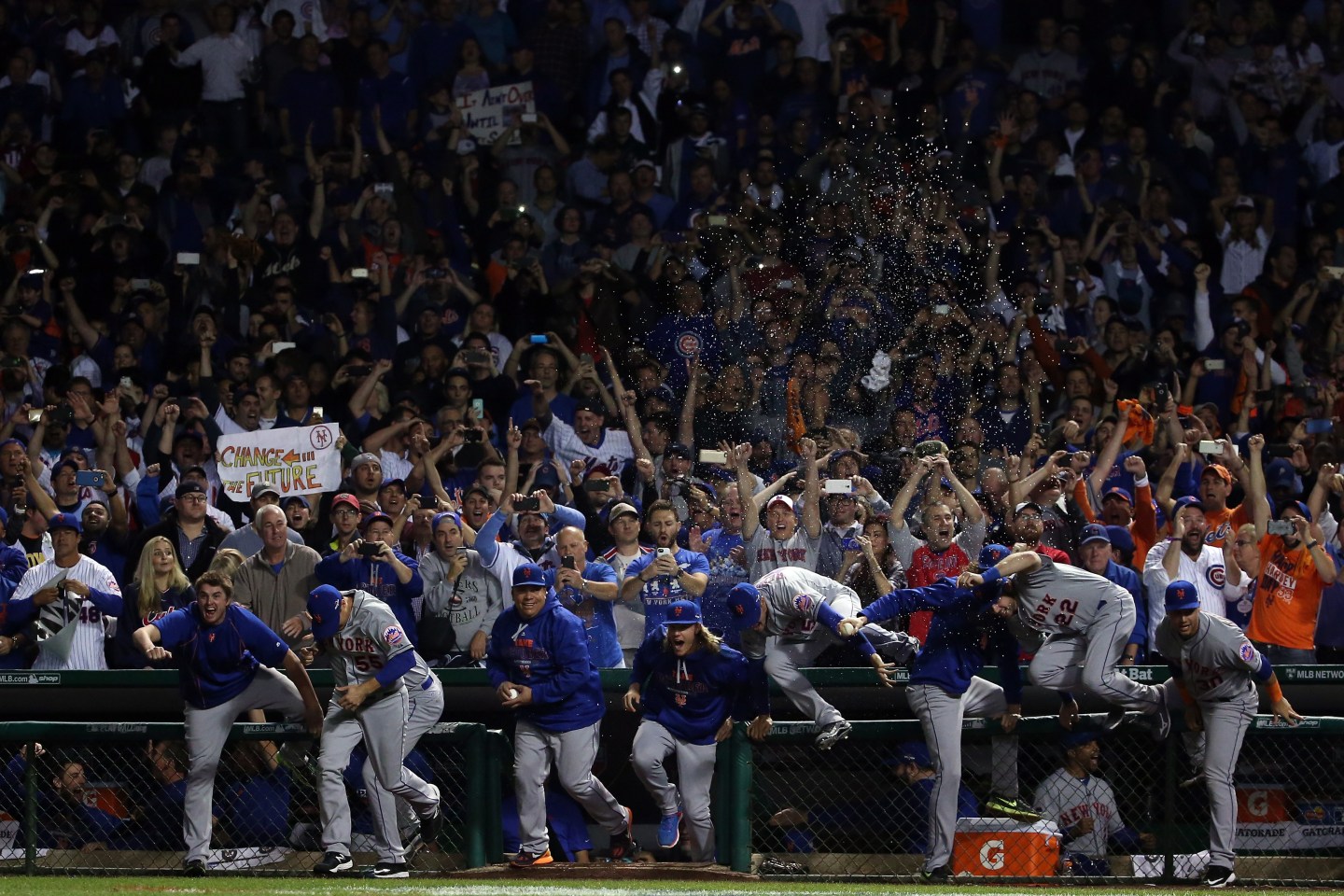 CHICAGO, IL - OCTOBER 21: The New York Mets dugout rushes the field to celebrate with his team after defeating the Chicago Cubs in game four of the 2015 MLB National League Championship Series at Wrigley Field on October 21, 2015 in Chicago, Illinois. The Mets defeated the Cubs with a score of 8 to 3 to sweep the Championship Series. (Photo by Jonathan Daniel/Getty Images)
Photograph by Jonathan Daniel — Getty Images

This week, the market’s eyes turn once again to the leaders of the U.S. Federal Reserve who will meet to set the nation’s monetary policy for the second-to-last time this year. Meanwhile, a number of major companies will report their latest quarterly results this week, including Apple, which will offer numbers showing how its new smartphones and streaming music service have fared with customers. Also, this week marks the start of baseball’s World Series, with the New York Mets making their first appearance in the championship round since 2000.

Leaders from the U.S. Federal Reserve will gather again to set the nation’s monetary policy in a two-day meeting that starts Tuesday. After the Fed’s last meeting, last month, interest rates remained at zero, with Fed chair Janet Yellen saying that uncertainty over the global economy outweighed the progress made by the U.S. economy. This week’s meeting will be watched closely for any hint of changes to the central bank’s economic outlook that would trigger the first interest rate hike in nearly a decade. Most economists aren’t holding their breath for a rate hike this month, though, as there is no Fed press conference or statement scheduled following this week’s meeting. The Fed’s final meeting this year comes in December, with many economists predicting that the central bank will, in fact, finally raise rates before 2016.

The tech and retail giant posts its financial results for the fourth-quarter and the company’s full fiscal year on Tuesday. Apple (AAPL) is expected to report revenue that outpaces Wall Street’s forecasts after the company saw record sales when it began offering its new line of iPhones, the 6s and 6s Plus. Investors will tune in to find out just how well those smartphones sold over the course of the quarter, with a panel of analysts polled by Fortune predicting that iPhone sales grew by roughly 24% to 48.7 million phones last quarter. Investors will also be looking for any numbers showing how the Apple Watch and Apple Music have fared.

The U.S. House of Representatives will vote this week on a new speaker to replace Ohio Republican John Boehner, who will step down from the post at the end of the month. Wisconsin Republican Paul Ryan won the support of a majority of his party’s most conservative members last week and is expected to be the nominee for the role.
[fortune-brightcove videoid=4575607966001]

Chevron (CVX) and Exxon Mobil (XOM), two of the world’s largest oil companies, both issue their latest quarterly earnings reports this Friday, with both oil giants likely to post drops in revenue amid the continued decline in global oil prices. Also reporting earnings this week are drug companies Pfizer (PFE) and Merck (MRK), while DuPont (DD) is expected to show a dip in third-quarter profit. Investors will also look to hear from new DuPont CEO Edward Breen — who stepped in for departed CEO Ellen Kullman recently after the company’s proxy battle with Nelson Peltz — on possible cost cuts. Twitter (TWTR) also reports third-quarter earnings this week, with the company’s profit expected to outpace analysts’ predictions.

Major League Baseball’s World Series kicks off midweek, with the New York Mets making their first appearance in the series since losing to the Yankees 15 years ago. The Mets will face off against the Kansas City Royals in a best-of-seven series that is expected to produce the most expensive tickets in World Series history. Fortune reported last week that fans will have to pay at least $700 to get a seat at Citi Field in New York, with the average ticket price at the stadium topping $1,500 per seat as of last week.