Here’s the reason Tesla can get away with reliability issues 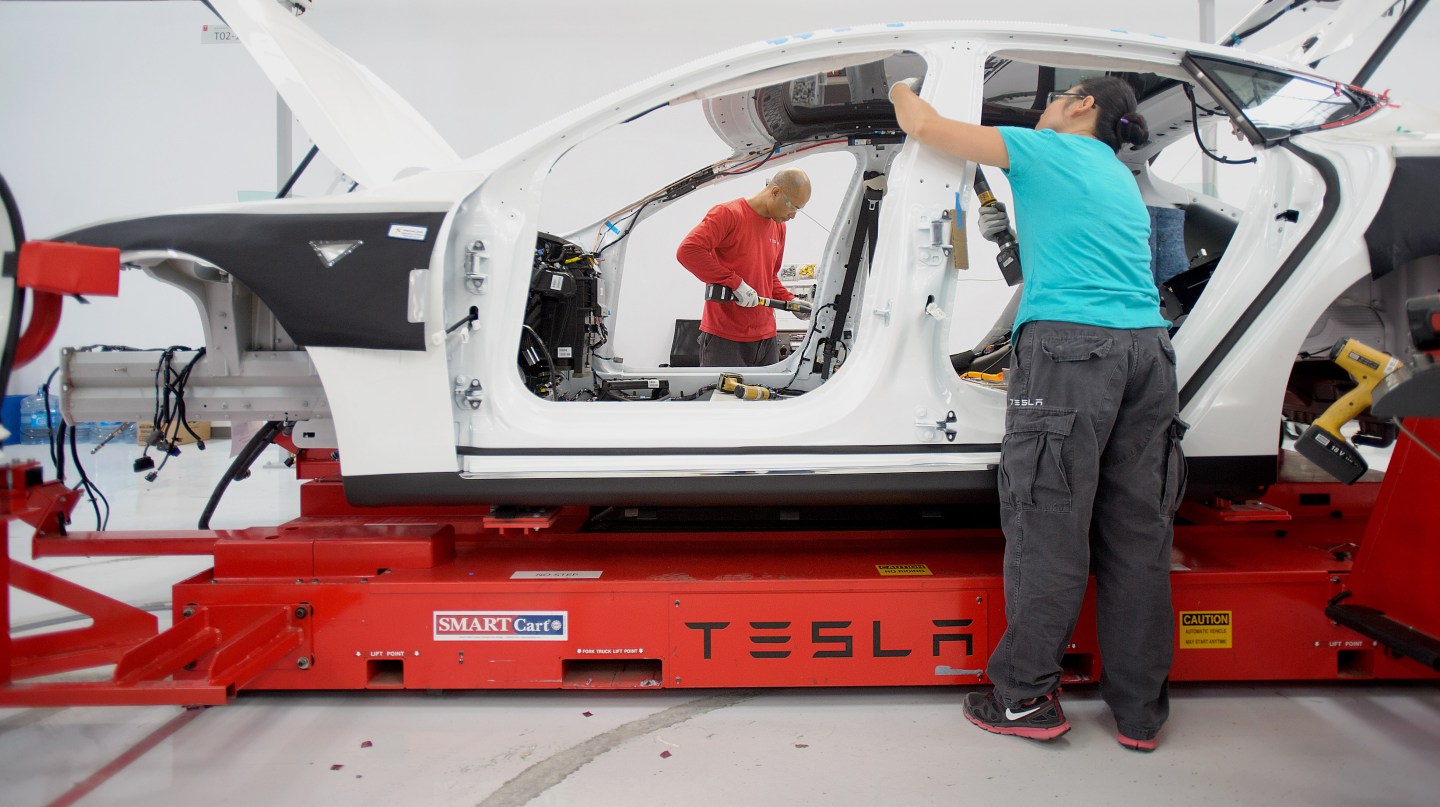 It was easy enough to predict the immediate aftermath of Consumer Reports pulling its recommended buy rating from the Tesla Model S earlier this week. Shares dropped 6.6% to close at $213.03 on Tuesday amid four times greater trade volume than usual and then slid even further Wednesday to close at $210.09, as analysts weighed in with mixed reactions.

What isn’t so clear is if the downgraded status will turn off potential buyers and depress future sales of the all-electric sedan or the new Model X SUV from Tesla (TSLA). The company’s earliest customers—a fan base that is perhaps among the most fervent in the auto industry—certainly aren’t going anywhere. Some 97% of owners in the CR survey said they would buy a Model S again, despite issues with the car.

Even Consumer Reports stands by its earlier assessment that the Model S is one of the best-performing vehicles it has ever tested. The publication only pulled its “recommended” rating after 1,400 owners who responded to its annual reliability survey said the Model S suffered from a variety of issues, from leaky sunroofs and general rattling to problems with the drive train, center touchscreen console, and power equipment. The publication forecast that owning a Tesla is likely to involve a worse-than-average overall problem rate, a step down from last year’s “average” prediction.

“This really wasn’t too surprising to me,” Dan Edmunds, director of vehicle testing at Edmunds.com, told Fortune. The company purchased a 2012 Model S P85 and drove it more than 30,000 miles over 16 months back in 2013. “The car isn’t perfect and we did have problems,” says Edmunds, who listed the electric battery and motor as parts that needed to be replaced when they tested the car. “But it also does a few important things very well—like performance and safety—and its approach to customer service is unmatched and totally different from other manufacturers. So yes, I’d buy the car, even knowing what I know about it.”

If anyone expected a backlash against Tesla, it’s not happening.

All of this raises a larger question: Does reliability even matter for Tesla—a company that is more often compared to Apple than General Motors? Or will even its earliest, most passionate adopters eventually turn on the company and its products?

As counterintuitive as it sounds—reliability doesn’t matter as much as you might think. At least for now. That’s largely because Tesla’s customer service is so responsive. The company is known for replacing an entire electric motor within 24 hours instead of tinkering with one troublesome part on the unit for days, says Edmunds, who adds that it seems to be Tesla’s preferred way of doing service.

“In a regular car, if your water pump went out, the company wouldn’t give you a new motor,” Edmunds says. “The company has an Apple Store approach to service. They’ll change the whole unit, give the customer a new one and then take back the problematic one, rebuild it, analyze what went wrong, learn from it, and put it into somebody else’s car that needs that part.”

It’s a smarter approach and it results in a lot less downtime for the owner, Edmunds adds.

This approach might work for Tesla today. The Palo Alto, Calif.-based company has a small, passionate customer base—it’s expected to deliver about 50,000 cars this year. And it’s managed to keep its warranty costs down as well as fix bugs in some expensive service items, according to Credit Suisse analyst Dan Galves.

For instance, Tesla has replaced the drive units, the most costly service item on the older vehicles, with a next-gen unit that went into production in late 2014, Galves says in his latest investors note. The company also extended the drive unit warranty to eight years from four, which should allay consumer fears that there will be out-of-pocket expenses.

And while replacing an entire electric motor might seem likely a costly approach, Tesla has managed to reduce its annualized cash costs of warranty (the warranty cash spent in a particular period, annualized, divided by the cumulative vehicles in operation at the beginning of that period), Galves says in his note. This number has dropped from $2,033 per car in the second quarter of 2013 to $947 per unit in the second quarter of 2015—a sign that the company continues to make improvements.

While some parts in the Model S are expensive to replace, many are cheaper than ones related to a combustion engine, Edmunds says.

“They can fix that bearing, test it, and put it in another car, which you couldn’t do with a transmission or an internal combustion engine,” Edmunds says. “Which means the cost implications of that might not be as a large as what might be on a normal automotive model.”

Even Brian Johnson, an analyst at Barclays PLC who has taken a more cautious approach to the company, says Tesla has frequently adopted a practice of “kaizen” (constant improvement) around its products, and feels comfortable that Tesla will be able to address the reliability issues. He also noted other leading luxury sedans fail to make the Consumer Reports recommended list, yet still sell.

However, Tesla execs have bigger aspirations than being a maker of niche all-electric luxury cars. By 2020, the company plans to make 500,000 vehicles a year. The Model 3, a cheaper all-electric car that will start at around $35,000, is currently under development.

“As they expand their customer base they’ll have more people who will be less patient,” says Karl Brauer, senior analyst at Kelley Blue Book. “At some point they’re going to have to build a car that serves real-world purposes.”

The reliability issues, if they persist, could make it difficult for Tesla to “cross the chasm” into a large-volume automaker, Johnson says. Warranty costs could mount, and if the company doesn’t accrue enough in its reserves to account for the costs it will place further pressure on margins.

Next, watch this video of Fortune testing out the new Tesla autopilot feature: