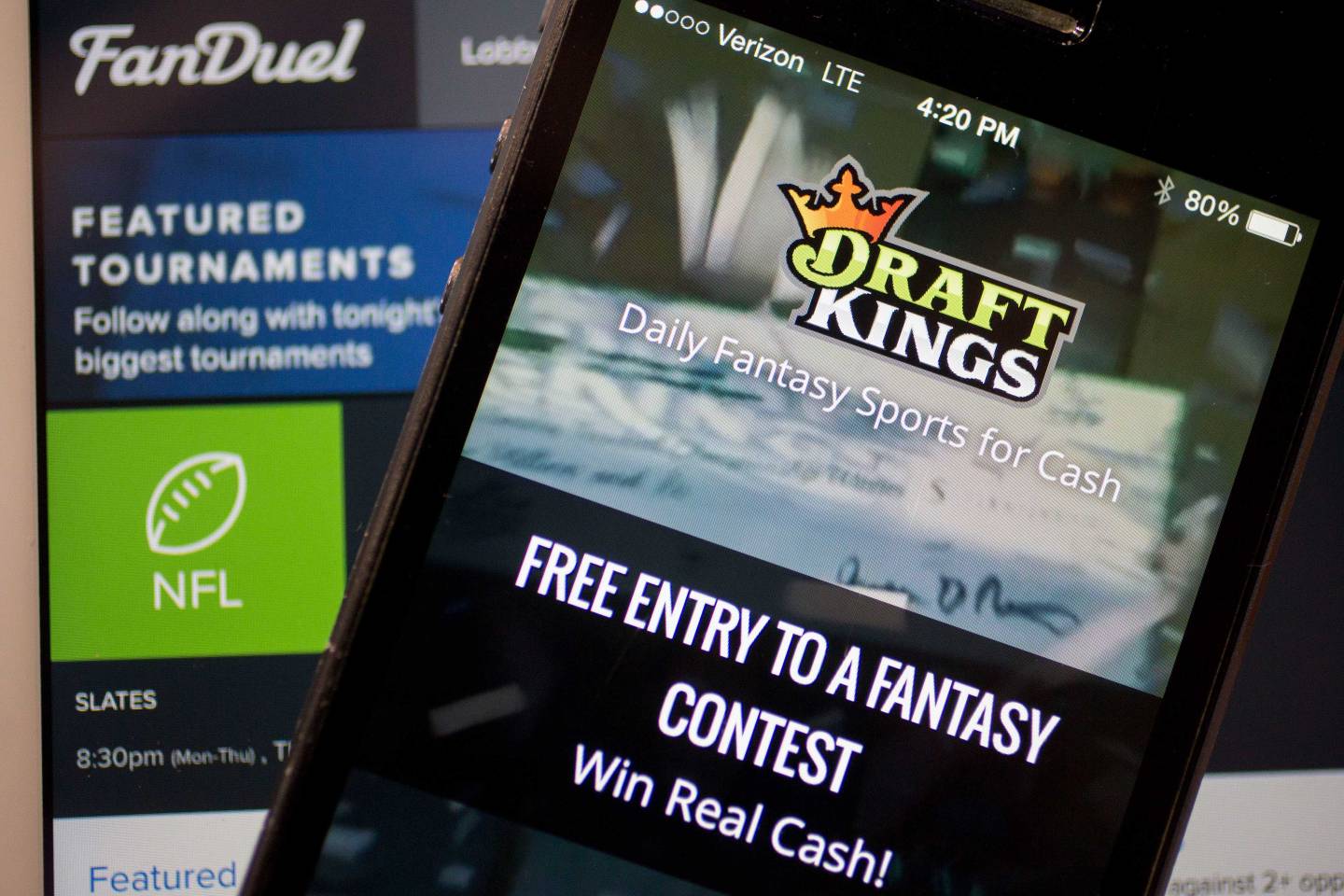 The DraftKings Inc. app and FanDuel Inc. website are arranged for a photograph in Washington, D.C., U.S., on Monday, Oct. 5, 2015. Fantasy sports companies DraftKings Inc. and FanDuel Inc. raised a total of $575 million in July from investors including KKR & Co., 21st Century Fox Inc. and Major League Baseball to attract players to games that pay out millions of dollars in cash prizes in daily contests. Photographer: Andrew Harrer/Bloomberg via Getty Images
Photograph by Andrew Harrer — Bloomberg via Getty Images

Preet Bharara, the U.S. Attorney in the Southern District of New York, has a reputation for toughness, and a track record of winning. In bringing insider trading charges, Bharara started off with an 85-0 record (of convictions or guilty pleas) when the government began cracking down in 2009. In 2011, he orchestrated what the poker world came to call “Black Friday,” which brought the online poker industry to its knees.

Now Bharara is taking a look at daily fantasy sports, according to the Wall Street Journal. The tough prosecutor joins a list of governmental bodies that have made similar moves, including the New York State Attorney General, the U.S. Attorney in Tampa, Fla., and the FBI.

Bharara may be the most ominous of all these entities. Fortune has called him “the enforcer of Wall Street,” and lest anyone think he may be out of his element in pursuing technology companies, he has already taken down digital currency criminals. Bharara oversaw the forfeiture of 29,655 bitcoins from Silk Road last year, and Fast Company has called him “the most dangerous man in bitcoin.”

The current storm of regulatory scrutiny and negative attention on daily fantasy, which has focused on the growing industry’s two leaders DraftKings and FanDuel, began last month when a DraftKings employee accidentally posted ownership data for a DraftKings contest, and then won $350,000 in a FanDuel contest. That specific issue has largely been addressed: the companies quickly banned their employees from playing on any daily fantasy sites, and an external investigation by the law firm Greenberg Traurig, which DraftKings retained to look into its records, confirmed that the employee, Ethan Haskell, did not see the ownership data prior to the time when he locked in his FanDuel lineup. But the scandal, along with the companies’ own aggressive advertising, is likely to blame for bringing these red-hot, controversial startups under the harsh light of regulatory scrutiny.

Fantasy sports businesses were left unbothered by the most recent relevant piece of federal legislation, the Unlawful Internet Gambling Enforcement Act in 2006, which focused on poker. But the real-money “daily” form of fantasy sports didn’t exist yet; FanDuel launched in 2009, DraftKings in 2012. Now, at a state level, the companies operate in 44 states. Nevada, this month, ruled that daily fantasy companies are gambling operators and need a gambling operator license to offer service in the state. (In contrast, Kansas, in May, became the first state to expressly legalize fantasy sports companies.)

Many have predicted DraftKings and FanDuel will not apply for gambling licenses in Nevada, since it would contradict their own insistence that their contests are “games of skill.” But other industry sources have told Fortune it is not out of the question—DraftKings and FanDuel could apply for licenses while reasoning that they disagree with the state’s decision, but want to be able to offer their services in the state nonetheless.

In looking at whether these companies violate federal law, Preet Bharara will examine the balance of skill vs. chance. That requirement varies from state to state. In Kansas, for example, a fantasy sports contest must prove only that it involves more skill than chance, which is an easy bar to cross for these companies. New York is far tougher: A contest must have no “material amount” of chance.

Although DraftKings and FanDuel are the early leaders in daily fantasy and created the category, Bharara’s scrutiny will fall on the whole space, which now includes Yahoo.

FanDuel did not yet reply to a request for comment on Bharara’s investigation. DraftKings sent this statement: “We strongly believe the games on our site – and daily fantasy sports in general – are legal. We recognize our responsibility to the millions of fans who are captivated by the excitement and interactive nature of daily fantasy sports to make sure they can continue to play the game they love. Ensuring a level and fair playing field for all players is a fundamental tenet of our company, and we are committed to working with all relevant authorities to ensure that our industry operates in a manner that is completely transparent and fair for all consumers. We are seeing a number of state regulators and other authorities taking a reasoned and measured approach to the daily fantasy sports business and hope that trend continues along with due consideration for the interests of sports fans across the country who love to play these games.”

DraftKings CEO Jason Robins has said that he welcomes oversight of the industry. But he also likely did not anticipate just how much oversight and scrutiny of this business would come in such a short time period.

See more of Fortune’s ongoing coverage of DraftKings and FanDuel:

Everything you need to know about the DraftKings/FanDuel data scandal