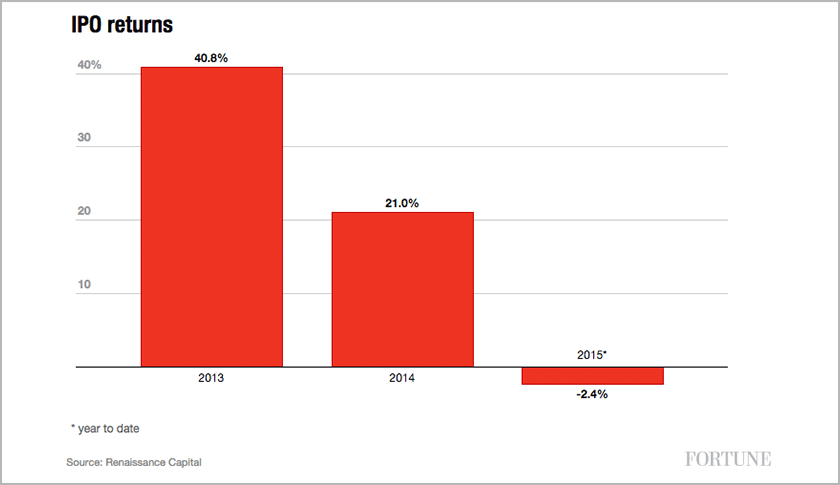 Etsy and Lending Club were two of the hottest deals when they went public. Shares of Etsy (ETSY) soared nearly 90% on its first day of trading. Lending Club’s stock was up over 55%.

Recently, though, investors have turned on both companies. Etsy’s stock has sunk more than 50% from its high. Shares of the online market place for handcrafted goods and garage sale items have now sunk 28% below their offering price. And LendingClub’s(LC) stock is now trading at 4% below what it IPOed at last December.

Etsy and LendingClub are far from alone. Nearly 60% of shares of the companies that have gone public in the past year are now trading below their IPO price, according to Renaissance Capital, which keeps data on the IPO market and is a manager of IPO-focused exchange traded funds. Renaissance said such sub-IPO prices is much more prevalent this year than in the past. Kathleen Smith, a principal at Renaissance, says that when more than 50% of recently public companies trade below their IPO price, it’s a sign of trouble for new offerings.

IPOs have always been a hit and miss business. But investors have often been willing to take that risk because returns from investing in IPOs that do well typically far outperform the flops. That hasn’t been the case this year. On average, shares of companies that have gone public this year have fallen 2.4%. That compares to a gain of 21% last year, and 42% in 2013.

And that includes the sometimes artificial first day IPO pop. If you had invested in every IPO this year after the first day of trading, you would be down 14.5%.

Of course, the IPO market tends to follow the stock market, which has hit a rough patch recently. But given that the economy is still relatively healthy and the S&P 500 is relatively flat, many are surprised at how poorly a number of IPOs are performing, especially because most of the companies going public are young companies with a lot of growth potential. In a slow moving economy, investors typically rush toward growth companies.

Kevin Kulak, a managing director at Growth Equity Partners, which specializes in helping private companies get financing, says the IPO market’s troubles stem from what’s going on in the private market. Venture capital funds and other investors in the private market, which increasingly include mutual funds, have been willing to invest in private companies at higher than typical valuations. That’s set a higher financing bar for companies to decide to go public. “The private market is taking the value that used to be created in IPOs away from the public market,” says Kulak.

Technology companies, which usually create the biggest buzz when they go public, have mostly been missing from the IPO market this year. Kulak said that’s a result of what he calls a growing number of “underwater unicorns.” Those are startups that can’t do an IPO today because the last time they raised money it valued the company at much more than what that company’s shares would currently trade for in the IPO market. Like so many houses after the financial crisis, owners of tech companies may not want to take their companies public and realize those losses.

For now, though, Kulak says, outside of negative headlines about some high profile unicorns, the problems in the IPO market have not bled into the private market. He says he is working on a number of financing deals with companies that are raising money at higher valuations than they garnered just a few months before.

Still, it’s all connected. Early stage investors want to be cashed out by later stage investors, who want to know that they are going to be able to sell the shares they bought for more when a company goes public.

It’s true that more tech companies are deciding to stay private longer. And investors are willing to go along for the ride. But that shift in thinking from both the companies and the investors happened in the past two years, when the IPO market was up 20% or more a year. And the assumption was that public markets would always be there to bail out late stage investors.

Now that the IPO market has gone negative, the well that private companies have been drinking from will probably dry up as well.