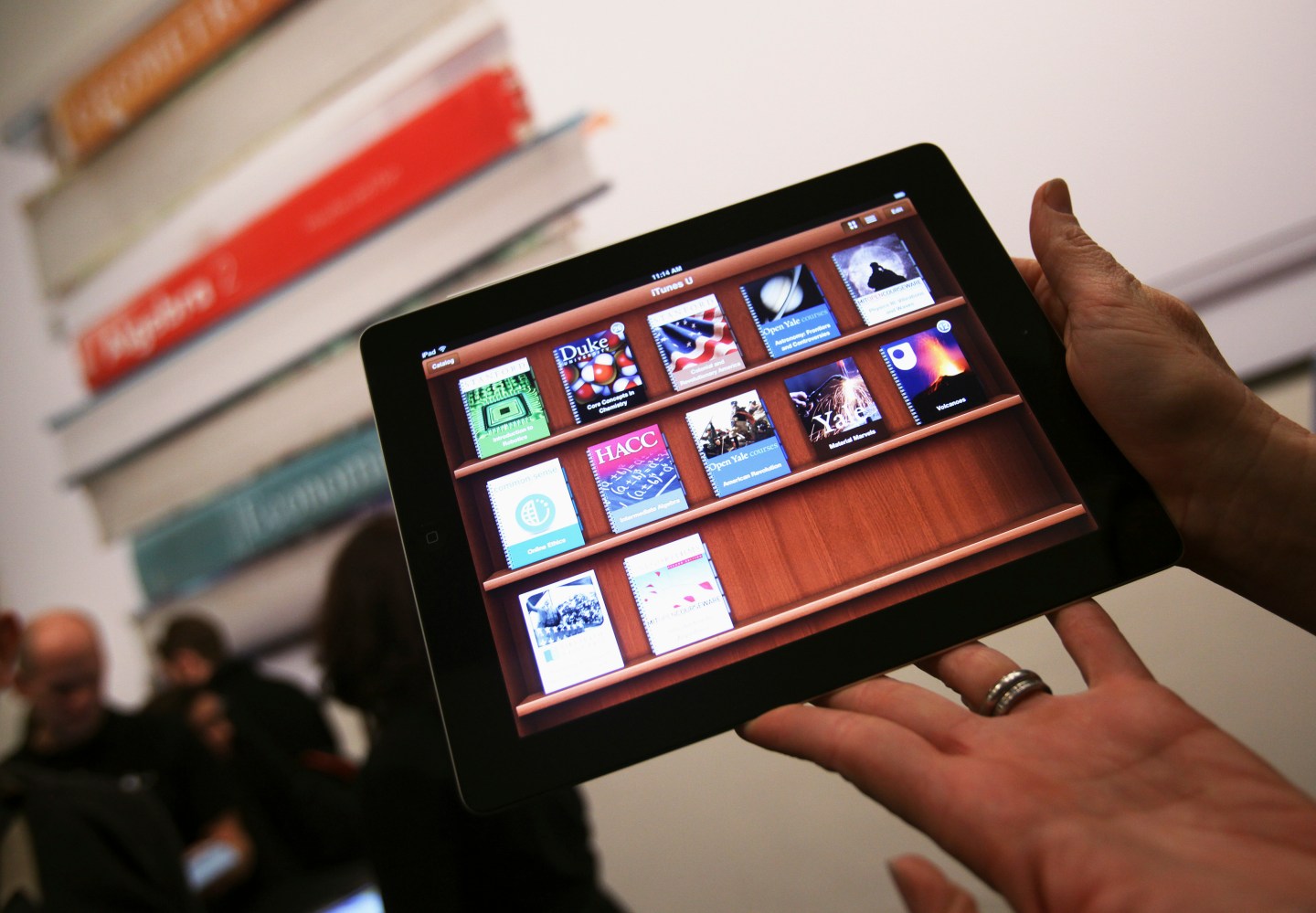 A woman holds up an iPad with the iTunes U app after a news conference introducing a digital textbook service in New York in this January 19, 2012, file photo. The U.S. Justice Department has warned Apple and five major U.S. publishers that it plans to sue them, accusing them of colluding to raise the prices of electronic books, a person familiar with the probe said on March 8, 2012. REUTERS/Shannon Stapleton/Files (UNITED STATES - Tags: SOCIETY EDUCATION SCIENCE TECHNOLOGY BUSINESS) - RTR2Z1Q3
Photograph by Shannon Stapleton — Reuters

It’s been ten years since authors first sued Google (GOOG) over the decision to scan millions of books, but now an appeals court appears to have confirmed once and for all the scanning did not violate copyright law.

In a unanimous ruling handed down on Friday morning, the Second Circuit Court of Appeals in New York deployed a familiar four-factor “fair use” test to conclude that the Google Books project was lawful.

“We see no reason in this case why Google’s overall profit motivation should prevail as a reason for denying fair use over its highly convincing transformative purpose, together with the absence of significant substitutive competition, as reasons for granting fair use,” wrote Justice Pierre Leval.

This ruling appears to settle once and for all a case that began in 2005 when the Authors Guild as well as a number of book publishers brought lawsuits against Google over a project that saw the company partner with dozens of libraries to scan over 20 million books.

“Today’s decision underlines what people who use the service tell us: Google Books gives them a useful and easy way to find books they want to read and buy, while at the same time benefiting copyright holders. We’re pleased the court has confirmed that the project is fair use, acting like a card catalog for the digital age,” said a Google spokesperson.

The Authors Guild did not immediately reply to a request for comment.

While Google, the Guild and the publishers initially reached a settlement that would have created a revenue-sharing model based on the scanned collection, a judge rejected the deal in 2011, saying it was a “bridge too far.” In response, the Authors Guild revived its lawsuit shortly after, but suffered a major setback in 2013 when a judge first ruled the scanning was fair use.

Friday’s appeals court ruling is significant because it clears the legal uncertainty that has been hanging over Google for a decade, and also because it provides more guidance on what qualifies as fair use in a digital age.

In particular, the court states on several occasions how copyright law represents a balance between authors and the public, and points out how many forms of fair use are partly commercial.

“Many of the most universally accepted forms of fair use, such as news reporting and commentary, quotation in historical or analytic books, reviews of books, and performances, as well as parody, are all normally done commercially for profit.”

The Authors Guild did not immediately respond to a request for comment.

Fair use a decade later

It’s perhaps ironic that a legal case that once transfixed the publishing world and the tech industry has become an afterthought for many, including Google whose co-founder Sergey Brin enthused about a “Library to Last Forever” in a 2009 New York Times op-ed.

But even though the controversy surrounding the scanning project has largely passed, the digital corpus amassed by Google continues to have big implications for libraries and scholars. As Judge Leval notes in the ruling, which cites a variety of scholarly articles:

An equally significant legacy of the legal case, however, may be what it has meant for fair use at a time when courts, companies and creators are struggling to define copyright law in the digital age.

As the Friday ruling makes clear, it is actually only two of the four “fair use” factors (“purpose of the use” and effect on market value”) that primarily determine when a work can and can’t be used without permission.

In siding with Google, Judge Leval stressed how the purpose for which Google was using the books – making them into a limited, searchable database – was “highly transformative” and not intended to simply reproduce reproduce the text. He also rejected notions that making snippets of the book available to the public would undercut sales of the originals, or that the scanned books undercut authors’ and publishers’ rights to “derivative works” (a theory that lawyers for the publishing industry have long expounded).

“We conclude that the snippet function does not give searchers access to effectively competing substitutes. Snippet view, at best and after a large commitment of manpower, produces discontinuous, tiny fragments, amounting in the aggregate to no more than 16% of a book. This does not threaten the rights holders with any significant harm to the value of their copyrights or diminish their harvest of copyright revenue,” wrote the court.

It is perhaps fitting that the final word in the Google Books case appears likely go to Judge Leval since he is well known in legal circles for an influential 1990 academic article on “transformative” works. The article was cited in the milestone Supreme Court case about a rap parody of the song “Pretty Woman,” and has since become a touchstone for current understandings of fair use.