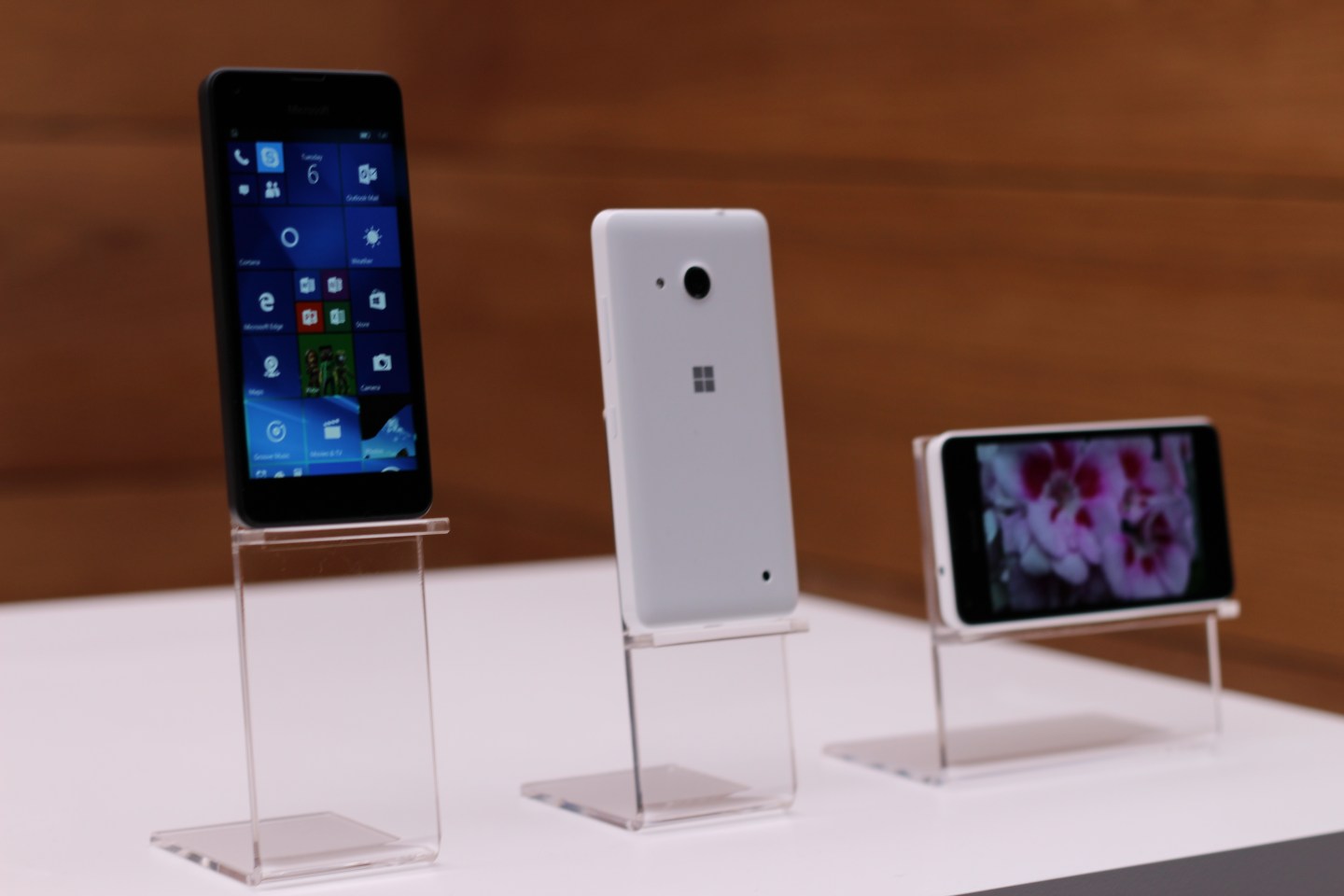 Microsoft (MSFT) hasn’t launched a high-end Windows Phone in over a year, forcing consumers who would normally consider a Windows device to purchase an Android or Apple one instead.

Of course, Windows Phone is a niche operating system. According to research firm Gartner, Windows Phone has only 2.5% of the worldwide smartphone market, lagging far behind Android’s 82.2% and iOS’s 14.6% marketshare.

But with the release of the Lumia 950 and Lumia 950 XL, Microsoft’s mobile operating system can finally do things that iOS and Android can’t.

The biggest difference between the two devices is screen size and processor speeds. The $549 Lumia 950 has a 5.2-inch 2560×1400 screen, whereas its XL sibling has a 5.7-inch screen with the same resolution and costs $100 more. The Lumia 950 XL also uses a slightly faster processor called Snapdragon 810, while the Lumia 950 uses Snapdragon 808.

Both the Lumia 950 and Lumia 950 XL include two antennas, in order to boost reception, and a USB-C charging port, a new reversible connection that is slowly becoming the new standard for phones. Each phone also comes equipped with a 20-megapixel camera on the back. One of the nicest things about the Lumia 950’s design is it has a dedicated button on the right-hand side of the device to quickly launch the phone’s camera app.

One of the most important new features on the new Lumias is called Continuum, which allows you to basically power a desktop setup from your Windows 10 phone. All you need is a small piece of hardware called the Microsoft Display Dock.

By plugging your phone into the Microsoft Display Dock adapter it turns your device into a desktop computer. Instead of pecking away at a document in Office on your smartphone’s tiny screen, you can write it using the keyboard of your choice on a big monitor. The dock also has ports for a wired Internet connection and USB peripherals—basically everything you need for an office setup. I didn’t get to try the software extensively, perhaps because it’s not completely finished, but it’s exciting. For example, you can send text messages from your desktop setup powered by your phone.

The most surprising part of the Microsoft Display Dock is its build quality. Pick it up, and you could easily mistake the aluminum brick for a paperweight.

The Lumia 950 and the Lumia 950 XL are phones, but plug it in at your desk, and you’re using a form of Windows that should feel familiar to anyone who’s used a PC in the past 10 years. Continuum will only work with the Lumia 950 and Lumia 950 XL for now, but the company plans to have the feature trickle down to more affordable devices.

The primary difference between the Windows powered by your phone and the Windows you’d find on another device, like the Microsoft Surface, is that the phone-based Windows can only run apps from the Windows Store, as opposed to “full Windows” which can run legacy .exe files. But for many people, having a desktop interface for their phone will further cement it as their primary computing device.

Another way that Microsoft is differentiating its phones from the masses of iPhones and Android devices out there is by eschewing the fingerprint scanner that is now standard on high-end smartphones.

Instead, Microsoft wants you to unlock your phone using your eyes. The front-facing cameras on the Lumias have an embedded infrared light camera, which enables iris and face-recognition technology Microsoft calls Hello. Instead of swiping your finger, you bring your handset up to your face and it will unlock the device, no password needed.

First, the camera needs to scan your eyeball so it knows what to look for. I didn’t get to configure an iris scanner personally, but I did get to see several Microsoft demonstrators use the feature. It doesn’t appear to be as quick as some fingerprint scanners are—there was a perceptible delay as presenters had to hold their devices up to their face. It’s an interesting technology, and one benefit is that it doesn’t require additional hardware, like fingerprint scanners do.

In the battle of smartphone operating systems, Microsoft might not be ready to take on Apple (AAPL) or Google (GOOGL) in terms of raw market share, but the Lumia 950 and 950 XL includes innovative features that the competition doesn’t.