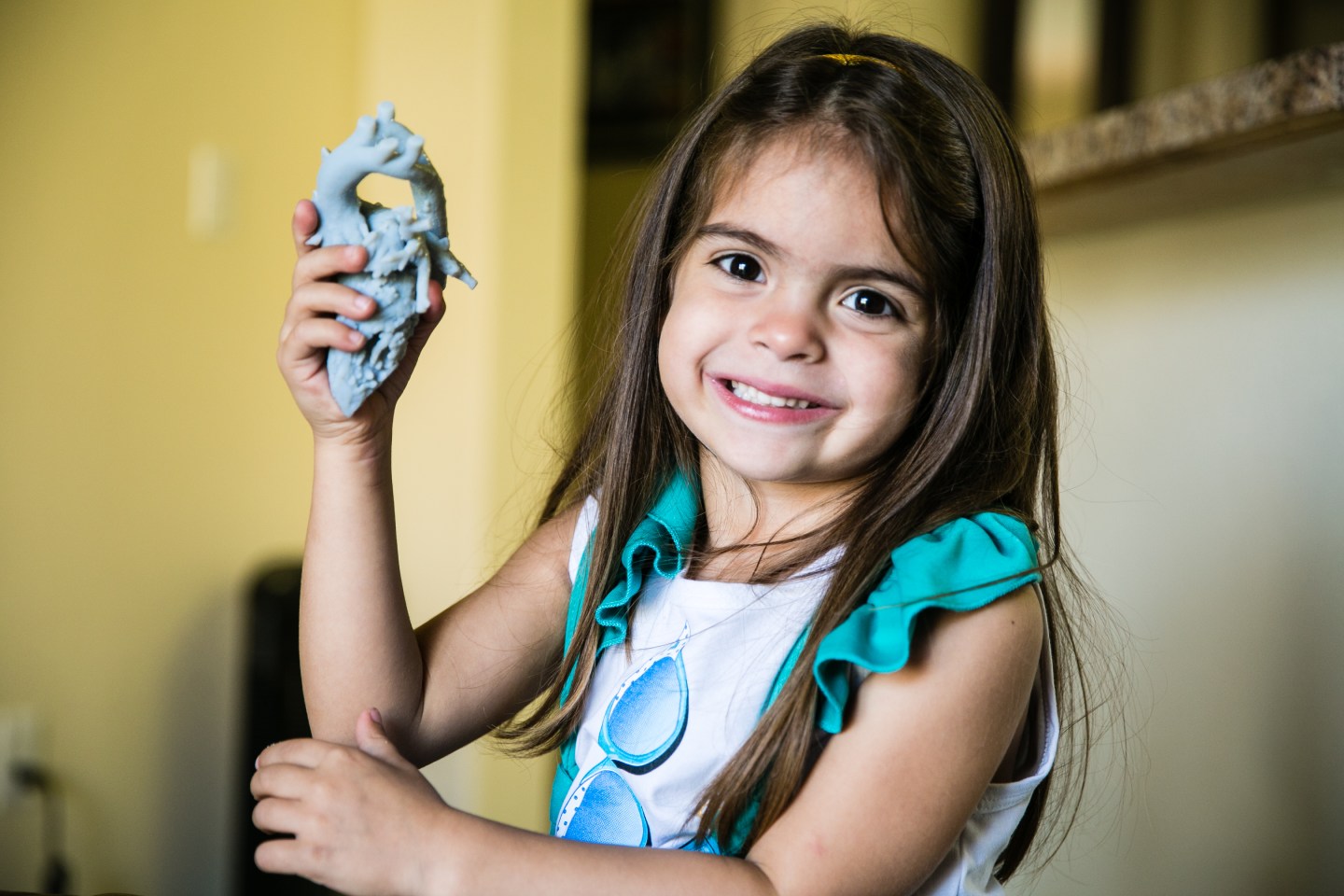 Before a surgery, Dr. Redmond Burke visualizes the operation, like the way a professional golfer envisions the ball going into the hole on the green before the putt. He lies awake at night, staring at the ceiling, and notes every tool, every incision, every stitch.

“It has to flow,” he tells Fortune by phone in early October, during an operating break at Miami’s Nicklaus Children’s Hospital, where he works as director of pediatric cardiovascular surgery.

Burke lay awake visualizing the procedure the nights leading up to operating on 5-year-old Mia Gonzalez, who required surgery to repair a congenital heart defect called a double aortic arch. Her defect caused a vascular ring to wrap around her trachea, which restricted her airflow and labored her breathing. For years Gonzalez was misdiagnosed by other doctors as asthmatic. Then the cardiac MRI team at Nicklaus Children’s Hospital found her heart defect. Divide the double aortic arch at its narrowest point, and you cure the vascular ring. Nearly 100 percent of the time, surgeons perform this operation by entering through the left side of the patient’s chest. Not so in Gonzalez’s case.

“She had one of the rarest versions of a rare problem,” Burke says. “There are a bunch of different kinds of vascular rings. When you’re a medical student, you look at them in a textbook, and there are a couple that occur regularly. Mia had one in the very last page, in the very last footnote, of the vascular-ring book. Because of that, people make mistakes when they encounter her heart defect.”

Gonzalez’s vascular ring could only been seen, and therefore repaired, by placing her on her left side and entering the right side of her chest. Excellent MRI imaging told Burke and his surgical team that part. But to really know how to perform this intricate operation—to really visualize how to divide an aortic arch by entering the right side of Gonzalez’s chest—Burke used a 3D-printed model of Gonzalez’s heart. According to Burke, that 3D-printed heart made the difference before Gonzalez’s successful heart operation in May.

“When I opened her chest, the part I needed to divide was right in front of me. Because I knew it going in there, I could make a much smaller incision in her chest,” he says.

The rapid pace of improvement in 3D-printing technology is quickly reshaping the manufacturing sector. But the intersection of 3D printing and medicine is a new frontier. Some startups are experimenting with the desktop 3D printing of biocompatible materials, as Fortune has reported. Inside hospitals, surgeons are now turning to 3D printers to create replicas of internal organs, giving them true-to-life representations of organs they need to operate on before seeing the real thing in the operating room. Printing in flexible materials allows surgeons to try out different techniques; printing using rigid, clear materials gives surgeons a view of the internal structure of complex organs. Larger companies have begun to step in to meet this need.

“With 3D printing, doctors can use materials that surround the structure, in essence giving physicians X-ray vision to be able to look in and do things they can’t do in [the middle of] surgery,” says Scott Rader, the general manager of the medical solutions group started inside 3D-printing company Stratasys nine months ago.

In March, two months before Gonzalez’s surgery, Nicklaus Children’s Hospital installed its own 3D printer, a Stratasys Objet Eden260VS. Today it’s used to print pediatric heart models, says Juan Apilonar, lead computer engineer at the hospital, who oversees the printing operations at the hospital. After MRI and CT scans, a program similar to computer-aided design software is used to transform the scans into printable, 3D-image formats. At that point, the heart is printed out of either a flexible, opaque material or a rigid, transparent material. Surgeons have used the printer for about 20 patients so far, says Dr. Robert Hannan, a cardiac surgeon at the hospital.

One of those patients was Gonzalez, who had two versions of her heart 3D-printed: a flexible gray model and a rigid clear model. The latter gave Burke a window inside the organ. With that 3D-printed heart, Burke was able to walk his surgery team, step-by-step, through the procedure before making the first incision. After two hours—double aortic arch divided, vascular ring cured—Gonzalez was out of surgery and on her way to recovery. Today she’s still doing well, according to Burke.

“For a heart surgeon, I’m used to be able to hold a heart when I operate on it. But I can’t hold an MRI in my hands and feel it and create an operation,” he says. “The 3D-printed heart gives you a fantastic view of a very complex, three-dimensional problem. It helped me do a really good operation for her.”