Meet BioBot, the ‘MakerBot of biology’ 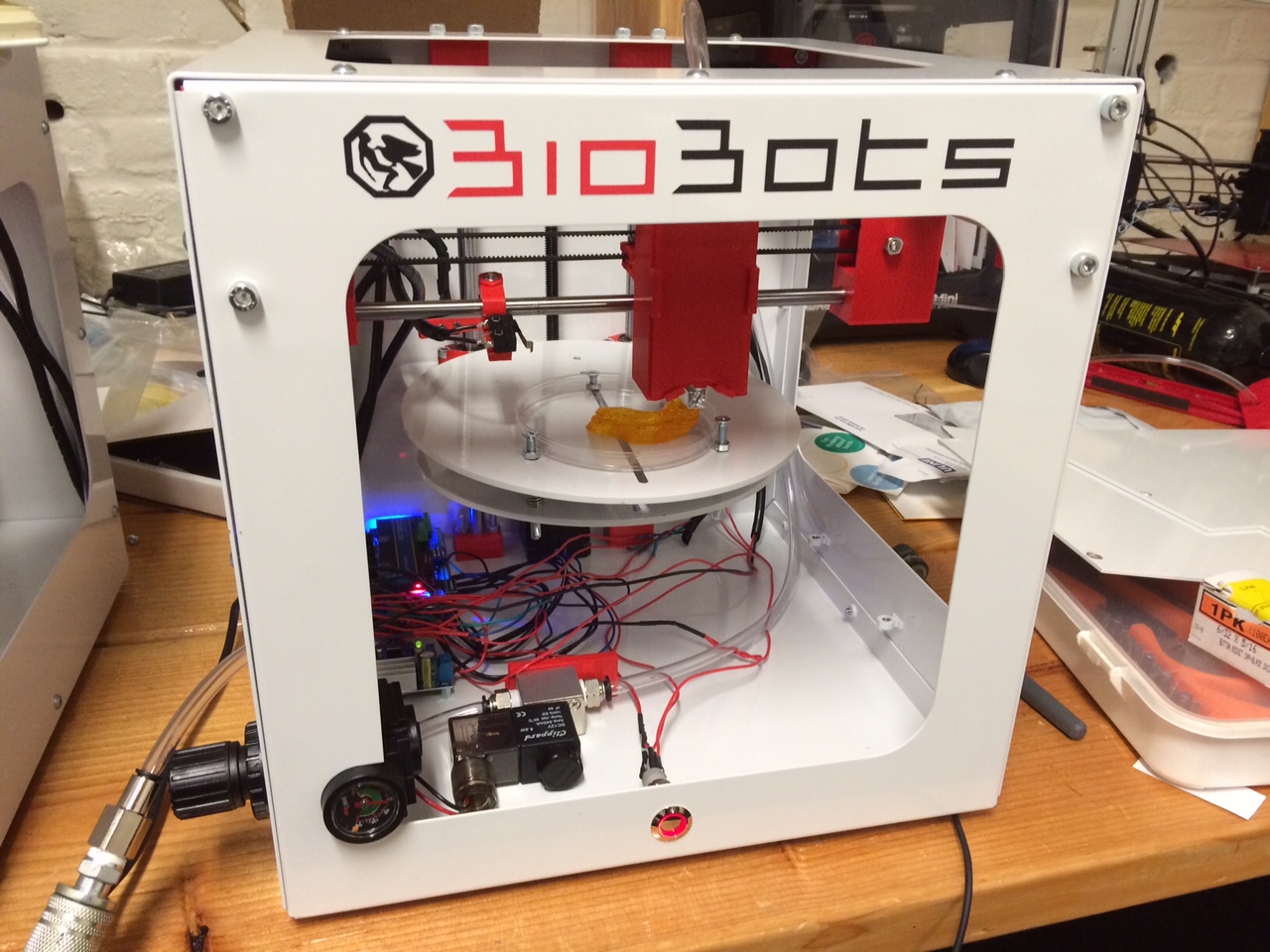 Inside a tiny office on the second floor of a South Philadelphia makerspace, the future looks like a large, greenish booger. The machine responsible for printing such an object: the BioBot, a bioprinter that prints living cell tissue and resembles a MakerBot.

Invented and manufactured by the appropriately named startup BioBots, the BioBot printer is the brainchild of a pair of University of Pennsylvania alumni. The booger-like substance this Fortune reporter encountered was merely a mixture of water and biocompatible material. Now suppose human stem cells, in addition to the water and biomaterial, had been part of the mixture. In that case, the BioBot’s final product would have been bioprinted stem cell tissue, which could then be matured into cartilage or other, different types of cells.

“You can print them on dishes and arrays and use them for various purposes like developing new compounds, new therapies, new drug therapies, new cosmetics,” says 23-year-old cofounder Danny Cabrera, who studied computer science and biology during his undergraduate years at UPenn. “So instead of using animals to test new compounds and therapeutics and cosmetics, you can use these bioprinted tissues made out of human cells.”

Translated: the BioBot offers plug-and-play desktop bioprinting, something that could transform medicine in a host of ways, including testing the toxicity of new drugs on potential patients. One biomedical engineering professor at Drexel University is currently using a BioBot to try to print bone tissue. At Michigan Technological University, professors are using a BioBot to synthesize nerve tissue.

Some bioprinters run upwards of $200,000, while the BioBot costs just $5,000. (Cabrera says this is the pricing for academic researchers, part of BioBots’ beta program where clients are offering comments on the device.) For that, customers receive the printer itself, an air compressor, accompanying software, and a starter sample of powdered biomaterial along with a plastic petri dish and a disposable, plastic syringe, which is used to hold mixtures of cells and biomaterial. BioBots doesn’t sell actual cells, although the plan is to sell kits of various biomaterials that will react to different tissue types. Right now, the startup includes the biomaterial necessary for printing tissue similar to cartilage with each BioBot purchase. Once the material is used up, more can be purchased from BioBots or from other suppliers.

“As soon as you get a BioBot, you can print something,” says Cabrera. “What we’re doing is we’re saying anybody can do this. [It’s] this MakerBot of biology idea.”

Each BioBot printer is assembled in-house with off-the-shelf electronics, 3D-printed plastic components, and steel frames manufactured in Philly. Picture a desktop 3D printer—that’s roughly the size of the BioBot, which operates along three axes like traditional 3D printers. On the computer, a user designs a 3D model of what the BioBot is going to print—another similarity to 3D printing in the manufacturing industry. Of course, the BioBot differs in what it’s printing—cell tissue—as well as the manner in which it is printed.

In a standard 3D printer, UV light is typically used to harden thermoplastics, but that same light would fry biomaterial. Instead, as the air compressor pushes the material out of the syringe, the BioBot uses blue LED lighting to harden the printed material.

Since January, Cabrera and cofounder Ricardo Solorzano have sold more than 40 of their machines to academic researchers and hospitals around the world. In March, BioBots walked away with a check of $1,000 after being voted the most innovative company of 48 that pitched at the annual SXSW Conference. That money is on top of the $50,000 BioBots received last fall as a member of Philadelphia’s DreamIt Health incubator class.

“We went from two guys in a dorm room to a legit operation,” Cabrera says.

Cabrera claims that where the BioBot represents a leap forward is in the biomaterial the startup has developed, the stuff that is mixed with cells and placed into the syringe to then be printed. Some of the powders are natural compounds, like skin collagen, while others are synthetic, long-chain polymers that are reactive to light (so they’ll harden as they ooze out of the syringe).

“We basically developed a set of chemistries that work really well with bioprinting that support a wide range of different cell types, and it basically makes a modular material for cells to grow on and for cells to differentiate into,” he says.

The startup is now raising a round of seed funding to begin work on the second iteration of the BioBot and develop more kits of biocompatible material, like one for testing the skin toxicity of cosmetics.

“It’s really the first time that such a tool is small enough, easy to use, and comes with different kits where you don’t have to develop your own,” says Cabrera.