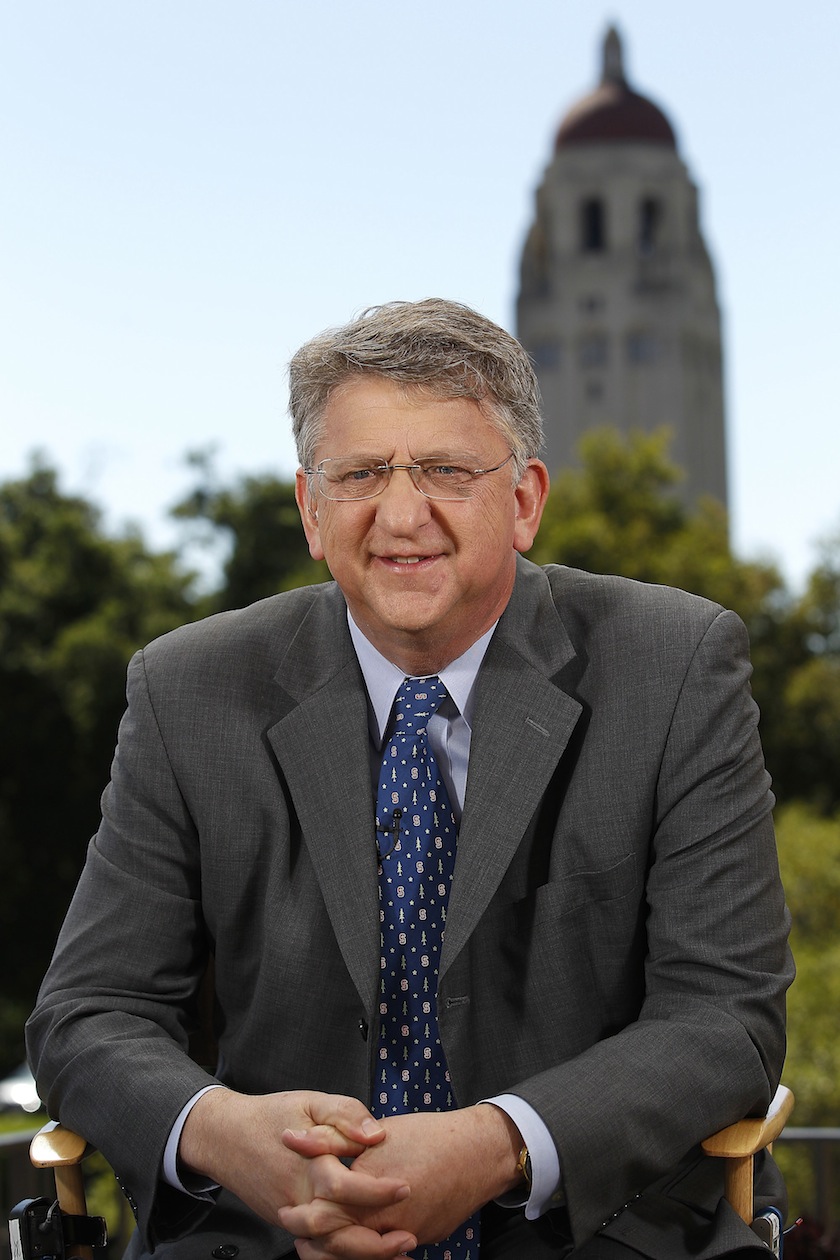 (Poets&Quants) — It has all the makings of a classic business school case study. The top leader of one of the world’s most prestigious institutions comes under attack, accused by current and former staffers for creating a culture of fear. He is sued by a former employee who, among other things, alleges that he is sleeping with his wife, a current employee.

The leader tenders his resignation, hoping that his decision to step down from the job may allow the institution to move forward without distraction. But the media attention in unrelenting, with negative stories appearing in newspapers all over the world.

What to do? Hire a public relations firm for damage control. That’s what Stanford Graduate School of Business Dean Garth Saloner has just done.

“His reputation’s been besmirched in ways that’s it’s going to be very difficult to repair,” says Paul Argenti, a corporate communications professor at the Dartmouth College Tuck School of Business who also advises firms on crisis management.

Well, if anyone can do anything, it’s the Edelman public relations firm. The largest privately owned PR agency in the world, Edelman is currently representing Saudi Arabia as it manages crises over the impending crucifixion and beheading of a young political critic, and civilian deaths in the Saudi-led military intervention in Yemen. Edelman, highly regarded and highly priced, is now representing Saloner.

“Great PR firm,” Argenti pronounces. “It’s a blue-chip firm. It’s one of the best, if not the best, firms in the world.

“It makes perfect sense in some ways. In other ways it’s like taking an atom bomb and dropping it on a very, very small village in a teeny battle. It’s a very very big gun for [Saloner] to pull out.”

But this job may be too much for Edelman. Details of Saloner’s behavior that have emerged from a lawsuit and a divorce case have led not only to the dean being publicly mocked and vilified, but have revealed highly irregular decision-making, and a bitter staff revolt.

Saloner, citing the wrongful termination lawsuit by a former professor who alleges the dean railroaded him out of the business school while sleeping with his wife, announced his resignation last month, on the same day Poets&Quants published a lengthy expose based on the lawsuit and the professors’ divorce. The university and the business school are keeping Saloner on as dean until the end of the academic year, and then he will go back to being a professor.

Revelations about his affair with professor Deborah Gruenfeld, and decisions he made about Gruenfeld’s husband Jim Phills, have savaged Saloner’s image on multiple fronts. Masquerading as “Jeni Gee” for Facebook chats with his lover and sending her messages hinting at unbridled lust have made him an object of ridicule.

Communications between Saloner and Gruenfeld, when combined with Saloner’s communications with Stanford staff and officials, show that he clearly failed to recuse himself from decisions about Phills after starting a relationship with his wife – a major professional misstep, whether or not he was motivated, as Phills alleges, by hostile intent.

The lawsuit also revealed a rebellion by dozens of current and former Stanford staff against Saloner. What’s become known as the “Group of 46” letter to Stanford Provost John Etchemendy was filed in the Phills suit, and accuses the dean of presiding over “reprimands, censures, curtailing of responsibilities, demotions, retribution for expressing concerns or raising issues, offensive behavior and decisions that have led directly to tangible employment actions such as dismissals, undesirable reassignments, forced resignations, and inequitable access to promotion opportunities.” The signatories alleged that numerous violations of Stanford’s Code of Conduct and HR policies occurred under Saloner’s leadership. In the letter, sent in April 2014 to Etchemendy, the group demanded Saloner not be rehired for another five-year contract. Etchemendy later told representatives of the group that the decision to reappoint Saloner had already been made by the time he received the letter.

It’s unclear when, exactly, Saloner contracted with Edelman in the wake of his resignation announcement. Spokespeople for Stanford and its business school confirmed that neither the university nor the school had a role in the hiring. Tuck’s Argenti notes that Saloner would not likely receive many job offers in the near future if he were to end up looking for a new position, such as a deanship at another business school.

Saloner’s crisis requires a PR response that’s general to many such eruptions: communicate what happened and why—“as much as you can tell us without getting yourself in further trouble,” Argenti says. “That’s exactly the same advice I’d give VW or anyone who’s going through a crisis,” Argenti says.

But the business school dean has a particular problem. “Maybe the truth is not something that is going to help him out here,” Argenti says. In any case, from a PR perspective, whether there’s foundation to the claims against Saloner is far less relevant than the crisis itself, Argenti suggests. “It doesn’t matter whether it’s true or not. His reputation is in a state of incredible disrepair.”

Sometimes, Argenti would want a client to speak out publicly, including to the press, he says. This is not one of those times. “I don’t know what he could possibly say that would help his case at this point. Sometimes the best advice is, ‘Please never say anything again.’”

Hiring a major PR company sends a message that may weaken the appearance of transparency, Argenti says. “There’s a certain lack of authenticity that comes along with the hiring of a large PR firm, that you kind of need help in shaping your message or spinning what you have to say,” Argenti says.

Certainly, Saloner is in an exposed position. The Poets&Quants expose was covered around the world, from the San Jose Mercury News in Silicon Valley, to Bloomberg BusinessWeek, Forbes magazine, the New York Daily News, Business Insider, and even the feminist website Jezebel and the Daily Mail in the U.K. The Wall Street Journal and Daily Beast have covered Saloner’s resignation announcement and the lawsuit, the Daily Beast framing the scandal as a love triangle that brought down the dean.

Saloner’s PR representative is Kathryn Kranhold, executive VP of Edelman’s Los Angeles office. A former Wall Street Journal business reporter, Kranhold had been a senior VP at Disney for a year before arriving at Edelman in 2013. Kranhold confirmed Edelman was representing Saloner. Her response to a request for an interview with her client was consistent with what Argenti suggested might be the proper course of action for a PR representative in Saloner’s case. Saloner, she said, was “unavailable for an interview at this point.” Kranhold did not respond by press time to a request for an interview about what services the firm was performing for Saloner and what their strategy might be.

Although Argenti foresees a hard road to any rehabilitation of Saloner’s reputation, he believes a PR firm of Edelman’s caliber could be very helpful in positioning Saloner with regard to any court cases.

Legal costs from the lawsuit by Phills against Saloner and Stanford, and from the intervention of Saloner and Stanford in the divorce case between Phills and Gruenfeld, have surely exceeded $2 million by now, and neither case shows any signs of wrapping up soon (in fact, Stanford and Saloner have launched a lawsuit-within-a-lawsuit against Phills over Phills’ accessing of his wife’s communications with Saloner.). But the situation is getting more costly for Saloner, with his hiring of Edelman, and for Phills, who has also brought on a PR firm, albeit a much smaller one.

Phills contracted last month with Barbary Coast Consulting in San Francisco, a company focused on the San Francisco Bay Area. So far, Barbary Coast has not been making their client available for interviews, either. Argenti says that given an absence of serious media interest in Phills, there’s no obvious reason for him to have hired a PR firm, other than out of caution. However, Barbary Coast may be working more behind the scenes than publicly, Argenti says. “The best work that gets done is the stuff you never ever hear anything about.”

Behind all the sordid headlines, an FAQ that shows the scandal is about more than sex

Stanford confidential: Sex, lies and loathing at the world’s no. 1 business school

The ‘rock star’ professor at the center of the Stanford scandal