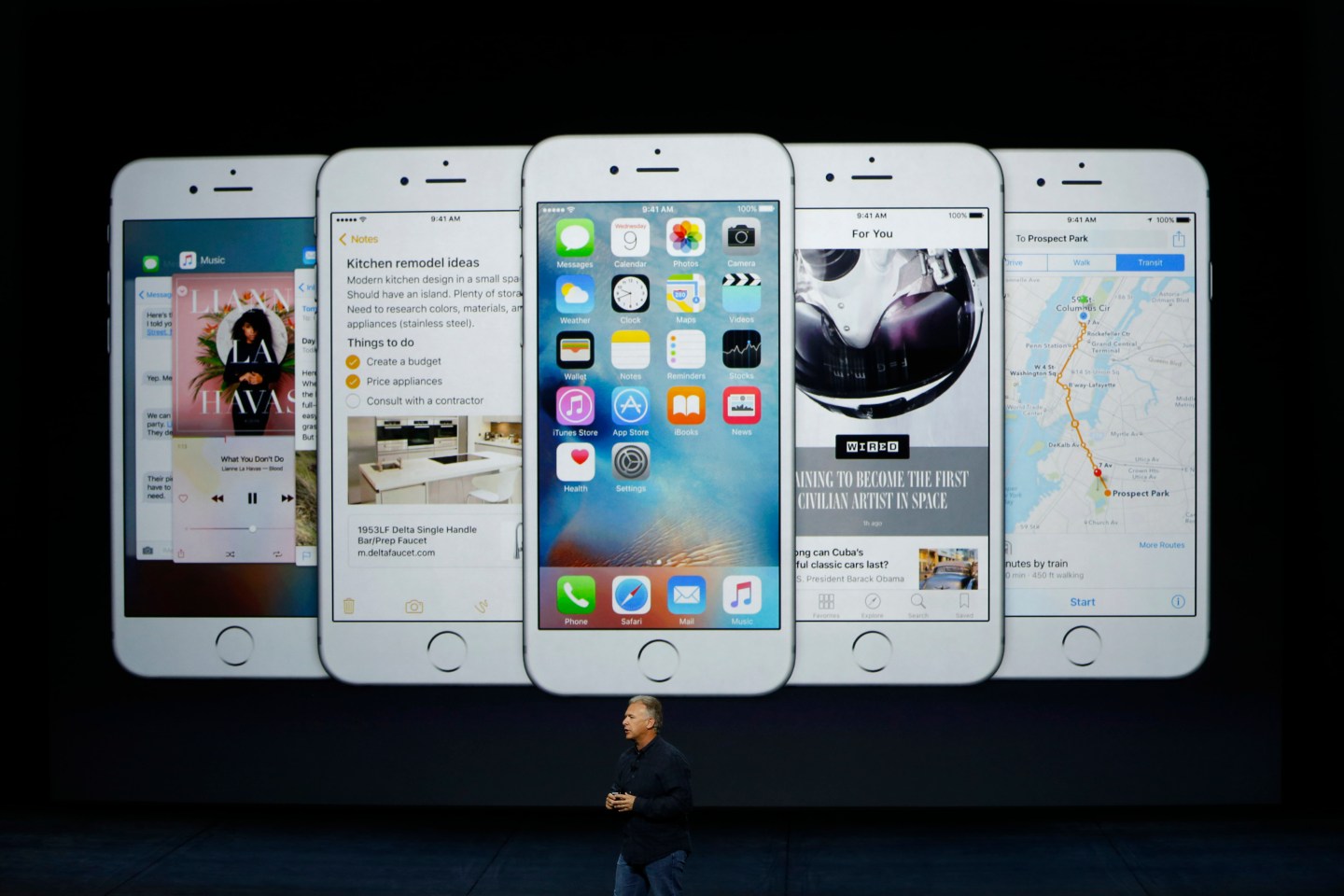 The iPhone 6S and 6S Plus went on sale Sept. 25, selling over 13 million units in the first weekend alone. In China, both smartphones are already sold out, with delivery times slipping to a month depending on the model.

A successful opening weekend, by all accounts, for a device that looks identical to last year’s iPhone 6 and iPhone 6 Plus: the iPhone 6S retains its 4.7-inch display, while the 6S Plus preserves its 5.5-inch display. Although, when it comes to Apple (AAPL), looks can be deceiving.

Apple’s marketing slogan for this year’s iPhone collection is: “The only thing that’s changed is everything.” Despite appearing to be nothing more than a cute marketing phrase, there is some truth to the statement.

Apple used a stronger 7000 series aluminum for the housing (I’ve yet to see a video of someone bending an iPhone 6S), sturdier glass for the screen, and included two improved cameras, a faster A9 processor, and lighting-quick fingerprint recognition. In addition to the now-standard space gray, silver, and gold color options, Apple introduced a pink iPhone it’s calling rose gold. Not everything has changed, however, as Apple stuck with 16GB, 64GB, and 128GB storage options.

The iPhone 6S starts at $649 with carrier financing plans, while the iPhone 6S Plus goes for $749.

Over the past week I’ve primarily used the iPhone 6S. It’s the device I bought and will ultimately use for the next year. I also had access to an iPhone 6S Plus, which Apple provided me for this review.

Just how well do Apple’s new iPhones stack up? Let’s take a look at some of the more notable new features.

Arguably the most-talked about feature on the iPhone 6S is 3D Touch. Essentially, 3D Touch turns the phone’s screen into a giant pressure-sensitive button. Similar technology is used in the Apple Watch, although it’s called Force Touch.

There are two main scenarios in which you can use 3D Touch. The first is with what Apple calls Quick Actions. Quick actions let users access a bunch of functions without ever having to open the app. All you have to do is apply pressure to any app’s icon, instead of tapping on it, and a list of actions pop up.

For example, pressing on the Messages icon lets you pick from a list of recent conversations and jump straight to the respective thread, while the Camera app provides shortcuts for taking a selfie, recording a video, or taking a regular photo. Other similar shortcuts are found throughout Apple’s own apps, with third-party developers now starting to release updates that include the feature.

Quick actions are useful, but something I’m still trying to integrate into my daily routine. I’ve grown accustomed to fully launching an app, then navigating to the proper screen to carry out a task.

The second scenario is a combination of two features Apple calls Peek and Pop. Each one refers to how you can preview content and then later act on it if you choose. For instance, within the Instagram app you can lightly press on a photo’s thumbnail to slightly enlarge it—otherwise known as a “peek.” A “pop” occurs by pressing slightly harder on the screen; in turn causing the photo to fully open.

Peek and pop are found throughout various applications. In the mail app you can preview a portion of a message without marking it as read. If you want to take action or read more, you press harder on the screen. Again, remembering to use 3D Touch while triaging my inbox or to peek at a web link a friend sent me in messages is something I’m struggling with, but a behavior I’ll relearn the longer I use it.

My most used 3D Touch feature thus far is pressing on the keyboard to turn it into a trackpad. A light press will let you move the cursor around a body of text, with a deeper press highlighting text.

On the surface, 3D Touch seems like hindrance. We’ve grown accustomed to tapping, swiping, and pinching on nearly every touch interface we encounter. Adding another dimension, quite literally, as an input method is bound to be confusing; and it is, at first.

There’s a learning curve to 3D Touch, not only in terms of using it, but also in remembering how to use it. The latter will become easier as more developers integrate it into their apps, providing more compelling reasons to remember it’s there.

One other note about 3D Touch I want to mention: Having to apply pressure on the larger iPhone 6S Plus when using the device with one hand is difficult. I struggled with balancing the phone in my hand, while attempting to reach the top-left quarter of the display and apply pressure. Ultimately, I’d have to hold the phone with both hands.

There’s not much to say about the iPhone’s new Touch ID fingerprint sensor other than it’s fast; almost a little too fast. With the previous Touch ID sensor, I could routinely press the home button quickly enough so that my fingerprint wasn’t registered, in turn allowing me to read any notifications or check the time on the lock screen.

The new sensor routinely reads my fingerprint so fast I no longer have the opportunity to check the time or anything else on the lock screen. My only option now is to use the power button to wake the device, or get in the habit of using an unregistered finger to press the home button.

Checking the time or reading notifications aside, one feature I found myself missing is a shortcut to the Camera app on the lock screen.

When an iPhone is locked, you can wake the screen and launch the camera app by sliding its icon up from the bottom-right corner of the screen. On the iPhone 6S, the camera shortcut disappears alongside the lock screen when I press the home button.

I would love for Apple to include the option to set a hardware button as a camera shortcut. Let’s replace iOS 9’s Wallet shortcut, you can find it by double-clicking the home button, with a shortcut to launch the camera. Or, perhaps, the ability to launch the camera app when my device is locked by pressing the power button twice, just like Google’s new Nexus smartphones.

By increasing the speed of its new security feature, Apple inadvertently eliminated one of my favorite features.

For the first time, you can now shoot 4K video using an iPhone. Unfortunately, I can’t tell you if video captured using the iPhone’s 4K feature is any better than 1080p video. I don’t own a 4K television, nor do I have any immediate plans to purchase one.

In the spirit of a thorough review, I enabled 4K capturing in an attempt to look for a telltale difference in video quality. The video looked fantastic on my high-definition TV, but so did the 1080p video I captured on the iPhone 6. I was unable to tell the difference between the two.

I’m on the fence about leaving 4K capture enabled as a means to future-proof the videos I do record. My only hesitation is the sheer amount of data 4K video requires. According to the iPhones’ settings app, one minute of 1080p video recorded at 60 frames-per-second uses 200-megabytes of storage. A minute of 4K video of identical length is nearly double, using 375-megabytes of storage.

Apple also introduced a new Live Photos shooting mode with the iPhone 6S. The pictures showcase a still photo, sandwiched between two short video clips. As you use the camera app on the iPhone 6S, it’s constantly recording video in anticipation of a photo being taken. Pressing the shutter button then saves only the previous 1.5-second of video, followed by another 1.5-seconds of video.

The end result is a photo that comes to life when touched.

I was skeptical about the utility of a photo that comes to life. Photos are so appealing because they encapsulate a moment in time, preserving a memory. Everything in the photo is frozen, leaving the rest up to your imagination.

Do I really want to see a sunset briefly come to life, or a photo that shows what my daughter was doing just before I asked her to smile? Do I want some of the magic to be ruined? Yes. The answer is yes.

My ‘aha moment’ with live photos occurred while attending a wedding. My kids were dancing, having the time of their young lives. After I took some photos with the iPhone 6S, I sat back down to show my wife one I was rather fond of. As I scrolled through the camera roll, I noticed each photo would briefly move as it appeared on the screen. This quick animation is the iPhone’s way of letting you know when you’re looking at a live photo.

I pressed on the screen, and the photo began moving. Instead of having a still photo of my kids dancing, I now had this photo I could bring to life in which I could see and hear them dancing. Aha, indeed.

That’s not to say every live photo you take is going to be magical. Nor should every photo even be a live photo. Trust me, I’ve taken some really bad live photos. I have a natural habit of lowering my phone after pressing the shutter button, during which the camera continues recording leading to a blurry mess at the end. A future software update will use the iPhone’s accelerometer to stop recording once it detects you’ve lowered the phone.

There’s clearly a time and place for live photos, and I’m lucky enough to have discovered one of them.

As expected, apps launch faster and games run smoother on the iPhone 6S. Apple’s new A9 processor is to thank for the speed boost. On the iPhone 6 I would often experience some slowness when running complicated tasks in the automation app Workflow. The iPhone 6S handled the same automation tasks without pause.

Each year Apple touts processing speed gains when it introduces a new iPhone. Some years the speed gain hasn’t been discernible. This year, there’s a clear-cut difference in overall performance when compared to the iPhone 6.

Is it worth it?

Apple makes a big deal about the fact it has complete control over every aspect—both hardware and software—of the iPhone, and just how much work goes into creating the ultimate user experience. The company’s ability to create the hardware behind 3D Touch, while also writing the software to maximize its performance is the best example of such collaboration in recent memory.

It’s hard to imagine Google (GOOGL) announcing Android would begin including software support for a similar feature, while relying on its hardware manufacturers to create and implement the hardware portion into various Android devices. The end result would be a wildly inconsistent experience.

With so much control, maybe next year is the year Apple finally ditches the 16GB model. Try as I might to defend low-storage iPhones, the fact of the matter is that 16GB iPhones require far too much thought be put into managing storage. A problem that’s sure to get worse as users start recording storage-hungry 4K video.