Selfies are dangerous, stupid and getting banned 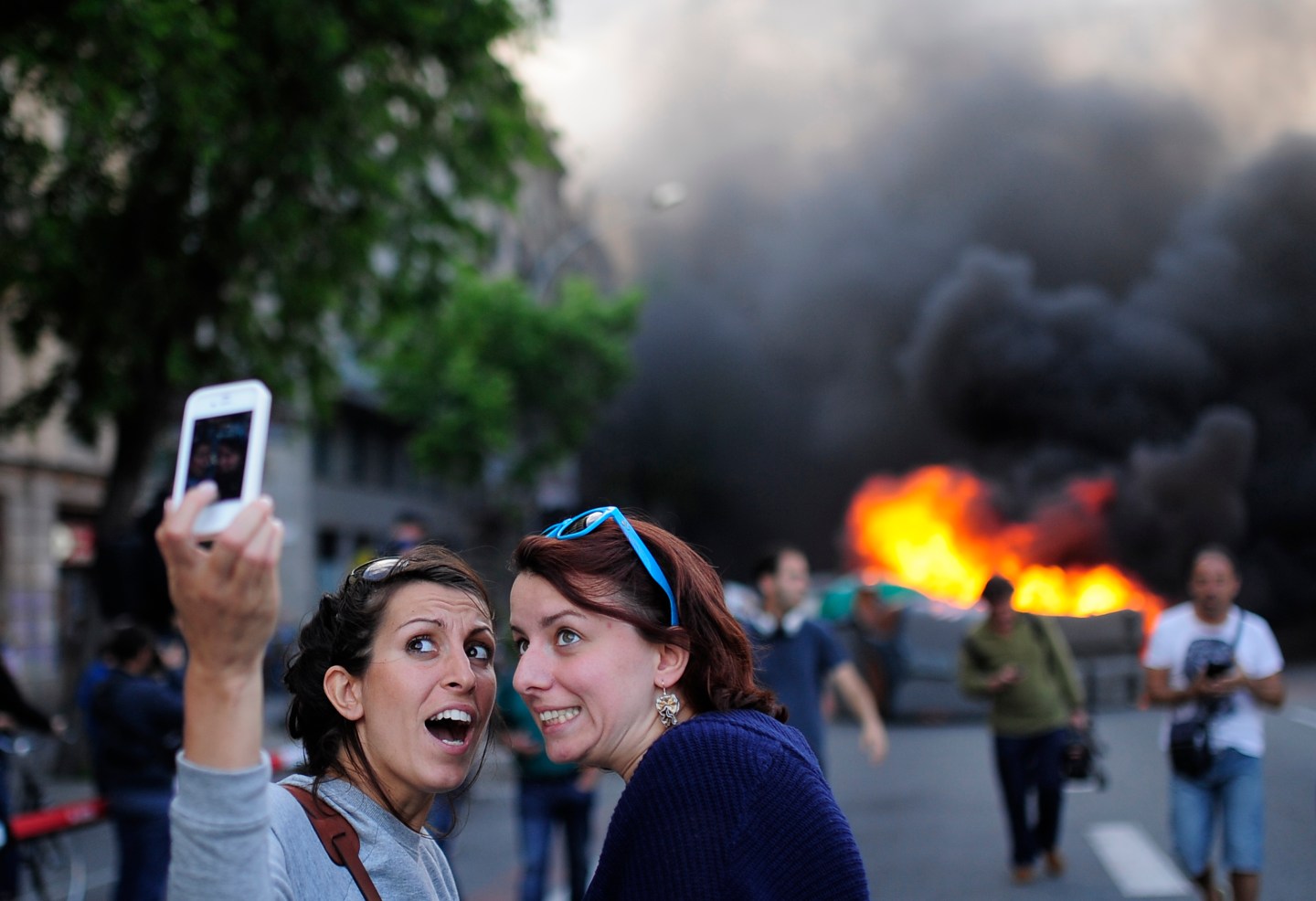 Tourists take a 'selfie' picture as demonstrators burn a trash container during a May Day rally in Barcelona, Spain, Thursday, May 1, 2014. Tens of thousands of workers marked May Day in European cities with a mix of anger and gloom over austerity measures imposed by leaders trying to contain the eurozone's intractable debt crisis. (AP Photo/Manu Fernandez)
Photograph by Manu Fernandez — AP

Earlier this year, a man was gored to death taking a photo during a bull run in Spain. A Japanese tourist died when collapsing and falling down stairs posing at the Taj Mahal in India. They are among the 12 tourists who have been killed as a result of taking selfies in 2015.

You’ve probably noticed it: More tourists are taking risks to get a great “selfie” to post on Instagram or Facebook. A Denver park was so concerned about people using “selfie sticks to try and get as close to the bears as possible” that it closed it down until bear activity subsided. The U.S. Forest Service, California Department of Fish and Wildlife and Nevada Department of Wildlife also felt compelled to issue a joint warning to tourists against taking bear selfies at Lake Tahoe’s Taylor Creek and said they’d shut it down to visitors if people persisted in taking these selfies.

A selfie stick is an extendable monopod used to take photographs of yourself. Your smartphone or camera is attached to one end, beyond the normal range of your arm. But as it has gained in popularity, it’s become seen as a nuisance, or worse.

This summer saw several major amusement parks, from Disney to Six Flags, getting rid of the sticks. Disney banned selfie sticks as of July 1 after several incidents, including a roller coaster that had to be stopped at Disney California Adventure park after a passenger pulled out a selfie-stick. The ride was closed for an hour.

According to USA Today, many museums, the Lollapalooza and Coachella music festivals, the Kentucky Derby, the Wimbledon tennis championships and others have banned selfie sticks, either because of concerns of safety or “obstructing” the views of others.

Selfie sticks, it turns out, are annoying to lots of people. A new survey finds that the selfie stick is “the biggest travel pet peeve of 2015.” Two out of every five travelers fingered these devices as their top annoyance, according to a survey of 58,000 travelers, conducted by the website MissTravel.com. Also on the list: hogging overhead compartments and bringing smelly food on board airplanes.

“Although you may have good intentions, carrying a selfie stick around could be seen as a sign of narcissism and self-absorption by your travel companion,” says Brandon Wade, MissTravel’s founder. Oh, and don’t forget, potentially lethal.

And not just to people. A mob of selfie-snapping “eco-tourists” in Costa Rica last week reportedly disrupted the annual breeding and nesting of sea turtles, leading wildlife authorities to launch an investigation into possible environmental violations.

Still, the travel industry, however, is not consistently opposed. Some hotels are offering “selfie” packages and offering prizes for visitors who post their selfies. And luxury resorts are even reaching out to Instagrammers with huge followings and showering them with freebies, in exchange for publicity.