Want a free stay at a luxury hotel? Build up your Instagram following 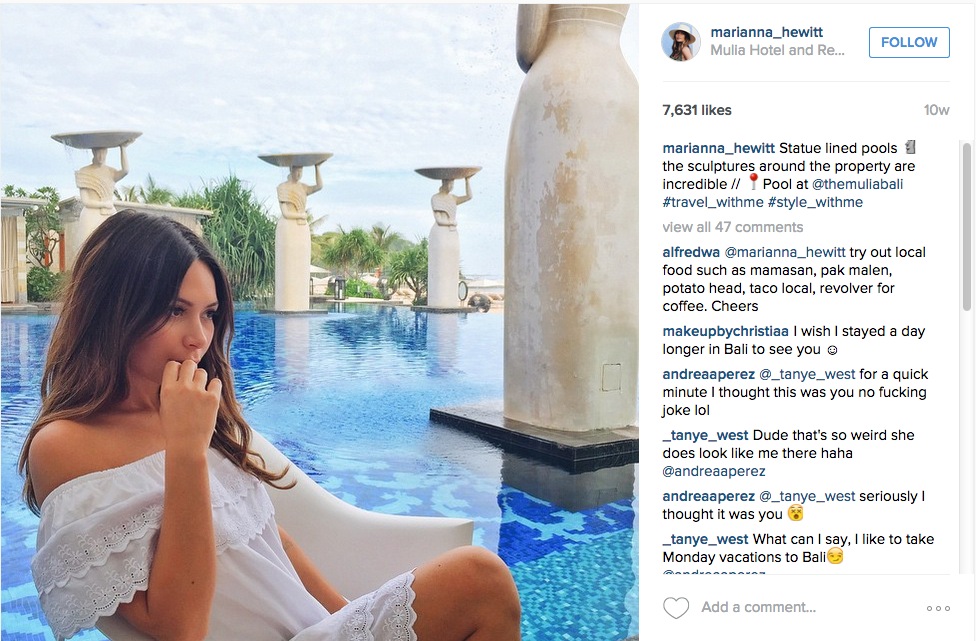 Marianna Hewitt, a 28-year-old lifestyle blogger, goes on an international trip about once a month. This spring, the Los Angeles resident spent five days at The Mulia Resort in Bali, Indonesia, where rooms range from around $400 to $1,000 per night. Thanks to her more than 396,000 Instagram followers, Hewitt says she was invited to stay for free; her entire stay was comped by the hotel in exchange for a little love on social media.

Hewitt uploaded a dozen photos of the property’s highlights, from a statue-lined infinity pool to a plate of French toast (“The best French toast EVER + whipped marscapone & strawberries,” she gushed about the latter.)

Hewitt has gone on dozens of similar trips in the past year, some of which included a stipend (she declined to disclose the amounts) in addition to comped airfare and accommodations. “My first was last spring to Thailand,” she says. “The Thailand tourism board reached out to me and I was like, ‘Oh my god, I can’t believe I’m getting paid to go on vacation.’”

If only I could start every morning on the beach in Bali // 📍 Beaches at @themuliabali in Bali, Indonesia #travel_withme

In the age of Twitter and texting, this is how luxury properties are trying to keep their cool. The Ritz Carlton, Triumph Hotels, Gurney’s Montauk, and the Mulia resort in Bali are some of the properties reaching out to people, with huge followings on Instagram and other social networks, treating them to trips for as long as a week in exchange for a few flattering posts, according to J Public Relations, which works with the hotels. What do they get from these hashtag experts that they can’t from their own advertising and marketing teams?

A spokesperson for the Mulia summed it up in a word: “styling.” “As much as I can try to ask our in-house photographers to take beautiful scenery pictures, we don’t have the skills to do an editorial type of photograph,” says a spokesperson for the Mulia Bali. “The influencers produce their own editorial styling, modeling, editing of what one weekend at the Mulia looks like, which may influence our potential guests to consider staying with us more than other resorts using traditional print ads with photos of empty rooms.”

Contracts and rules do not reign in this world. Hewitt says she is rarely given guidelines on what to post beyond a nudge to upload something at least once per day. “You’ll probably end up posting more anyway,” she says about the minimum. “You kind of show the hotel or wherever you are in your own eyes. They want it to be in your voice.”

A spokesperson for the Mulia Bali said their social media team digs into the feeds of potential invitees to ensure they match the brand’s aesthetic; the resort favors clean, minimalist photos, and “not too many sexy selfies,” a signal that they might spend more time shooting themselves than the property. While a personality’s number of followers is taken into consideration — 10,000 and up is generally the rule — “engagement,” meaning how much their followers interact with them and the things they post about, matters more to many hotels and resorts. On Instagram, this information might be gleaned from the comments on a post. (In response to Hewitt’s photo of the Mulia’s statue-lined pool, user chrissymp531 tagged eddieb2 and said, “wow this is so beautiful! Next trip?”)

“If they have a luxury audience and a passion for luxury travel, the engagement, that metric, is way more important to us than the fan count,” says Allison Sitch, vice president of global public relations for the Ritz-Carlton. “We don’t want to have 100 million fans that we never ever hear from.”

In April, the Ritz-Carlton Central Park hosted Amanda Saiontz Gluck, the 30-year-old blogger behind the pastel-tone and bubbly-heavy Instagram account @FashionableHostess (followers: north of 42,000), and her husband for their third wedding anniversary. The hotel outfitted their room with a tray of her favorite desserts (Laduree macarons), a chilled bottle of Moet Chandon, and a framed photograph of the couple. “They even positioned things in places where they probably knew I’d take photos,” she says.

Gluck Instagrammed four glowing shots of their stay with the hashtag #RCMemories, which Sitch said the Ritz-Carlton mines to populate the hotel chain’s own Instagram feed. “None of the assets there belong to us,” Sitch says. “They’re all from consumers.”

Under the Federal Trade Commission’s “Dot Com Disclosures” guidelines, social media personalities are supposed to disclose gifts and payments they receive from companies, such as comped hotel stays. But enforcement is unclear: while people who violate the rule can be fined, the penalties are not clearly defined. Gluck says she generally doesn’t use the Instagram caption field to explain that she’s been “gifted” a hotel accommodation, and the brands she works with don’t have consistent rules around disclosures on social media.

“Some brands will want you to write ‘#spon,’” meaning “sponsored,” a common practice among Instagrammers who are paid to endorse products, “other brands don’t require you to say anything,” she says.

None of the hospitality brands contacted for this piece revealed exactly how much they’ve spent on hosting social media stars, and in this new way of publicizing a property, success is hard to track. (How many Instagram “likes” translate to one booking?) But, properties say, being known by consumers who are glued to their smartphone screens is reason enough to warrant this practice. “People are starting to recognize some of the signature photos or locations as the Mulia almost instantly as a result of the social media posts done from these influencers,” says a spokesperson for the resort.

And the social media stars are happy to do their part. “I’m trying to take advantage of it for everything I do,” says Gluck. “Some of my friends, they range in followers from 20,000 to 200,000, and no one ever turns down a great trip.”

Sheila Marikar is a Los Angeles-based contributor to Fortune, the New York Times, Inc., InStyle, and other publications. She writes frequently about popular culture.