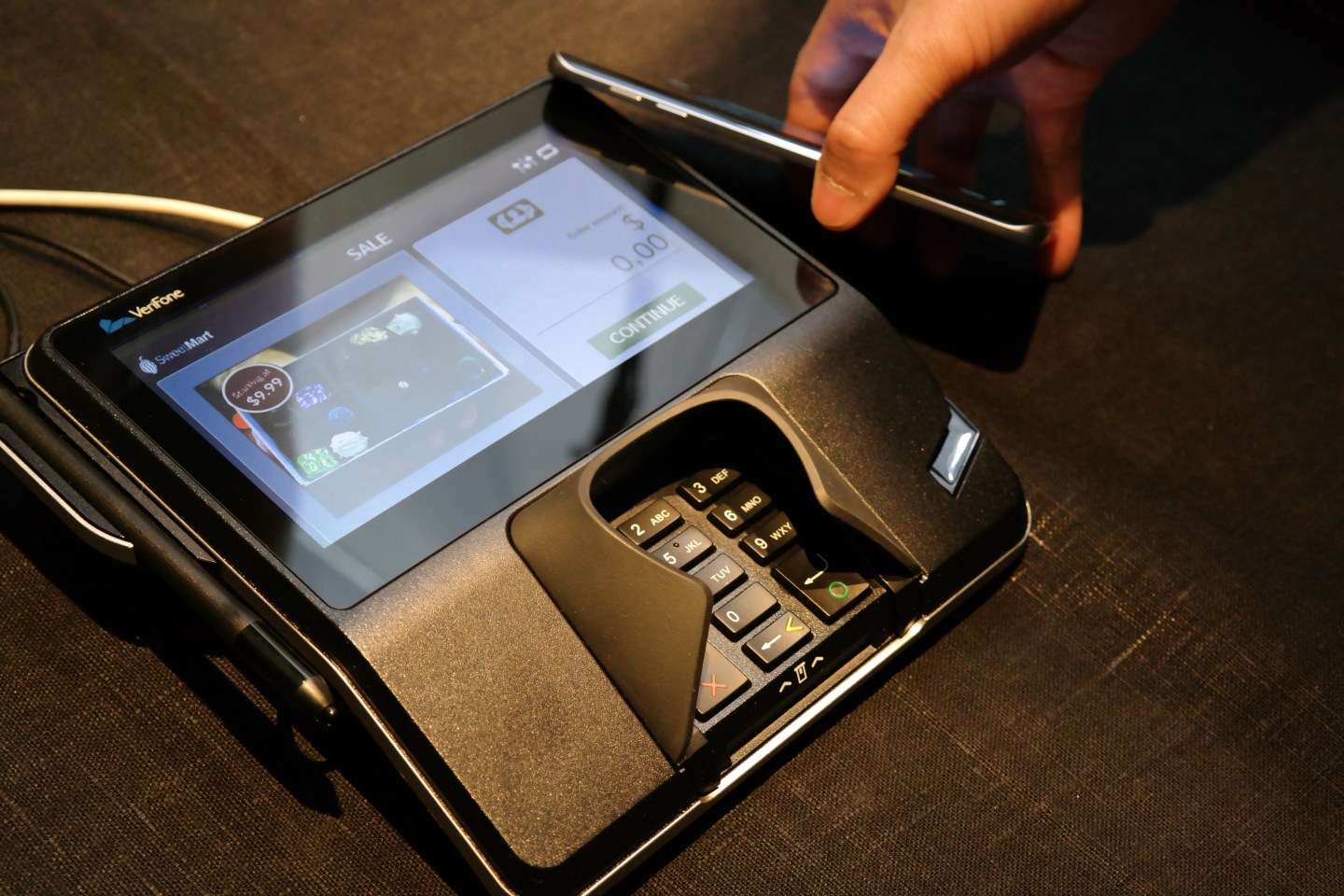 Samsung Pay, the company’s mobile payment service, launched in the U.S. this week. The service—previously only available to beta testers—is designed to make purchasing items easier by replacing your physical wallet with digital versions of your credit and debit cards.

Over the past week I tested out the service on a Galaxy S6 Edge+ the company provided me. My current bank isn’t one of the few institutions—which include Bank of America, Citi, American Express, and US Bank—that chose to participate in the program at launch, which meant I was forced to use a $50 pre-paid card instead of my own debit card.

The more common NFC is the same technology found in Apple Pay and Android Pay, where payment information is securely transmitted between an NFC chip (found in the smartphone) and an NFC reader (usually installed near the point of sale machine). The downside to relying solely on NFC is its lack of widespread adoption amongst retailers, since vendors have to invest in new hardware in order for the technology to work.

Meanwhile, MST works by sending a small magnetic signal from your smartphone to a credit card reader, essentially mimicking the same signal that’s produced when you swipe your card. Nearly all retailers have a credit card machine which will allow Samsung Pay to work and doesn’t require additional investment in infrastructure and/or staff training to work.

I tested both payment scenarios: once when an NFC terminal was present, and multiple occasions with MST functionality. There was no noticeable difference when using either payment method—the device is able to tell what type of signal is needed to complete the transaction. My only responsibility to finalize the payment was authorizing the transaction by placing my finger on my smartphone’s fingerprint reader.

Samsung Pay’s setup process is pretty standard as far as these types of services go: Users only need to scan the card onto their smartphone using the company’s complimentary card reader, accept service terms and conditions, and then enter a verification code to confirm card ownership.

To make a payment, you swipe up from the bottom of your device’s screen—something that can be done even if the screen is turned off and the device is locked—select the card you want to pay with, and place a finger on the home button for fingerprint authorization.

The entire process takes seconds. You don’t have to mess with a wallet, or dig through your purse to find a card; you pull out your phone, swipe, and pay. It’s just as fast as Apple Pay or Android Pay, only you no longer have to figure out if NFC payments are accepted by the retailer.

Although, it’s important to note that Samsung claims its mobile payment service will work at 95% of retailers and with most older card readers, save for gas pumps and ATMs.

Meanwhile, using the service in public is an experience upon itself: Most retail clerks were confused or downright scared when I attempted to pay with it using my smartphone. One particular clerk even said it was “just plain scary, I don’t like it at all” with an accusatory look on her face. (I tried to explain Samsung Pay to her, but she didn’t want to hear it.) Another clerk stared at me, bewildered, after I requested he hold my test device up to his credit card terminal.

The service is already built into Samsung’s Galaxy S6, S6 Edge, Note 5, and S6 Edge+, which are all equipped with the necessary components for Samsung Pay, although your wireless carrier will need to push out a software update before you can use it. Currently, only AT&T, Sprint, U.S. Cellular, and T-Mobile support the service.

In the future, Samsung plans to add loyalty cards and provide partners with a method for pushing coupons and discounts directly to your Samsung Pay account.

It’s no surprise Samsung Pay’s technology works; we knew as much after I reviewed LoopPay’s fob, which includes the same technology found in Samsung’s devices.

Truth be told, Samsung Pay’s technology is a feature I desperately wish Apple would imitate, so that its service is much more useful.

For more on Samsung, check out the following Fortune video: