Here’s what Tesla’s new Model X SUV is like 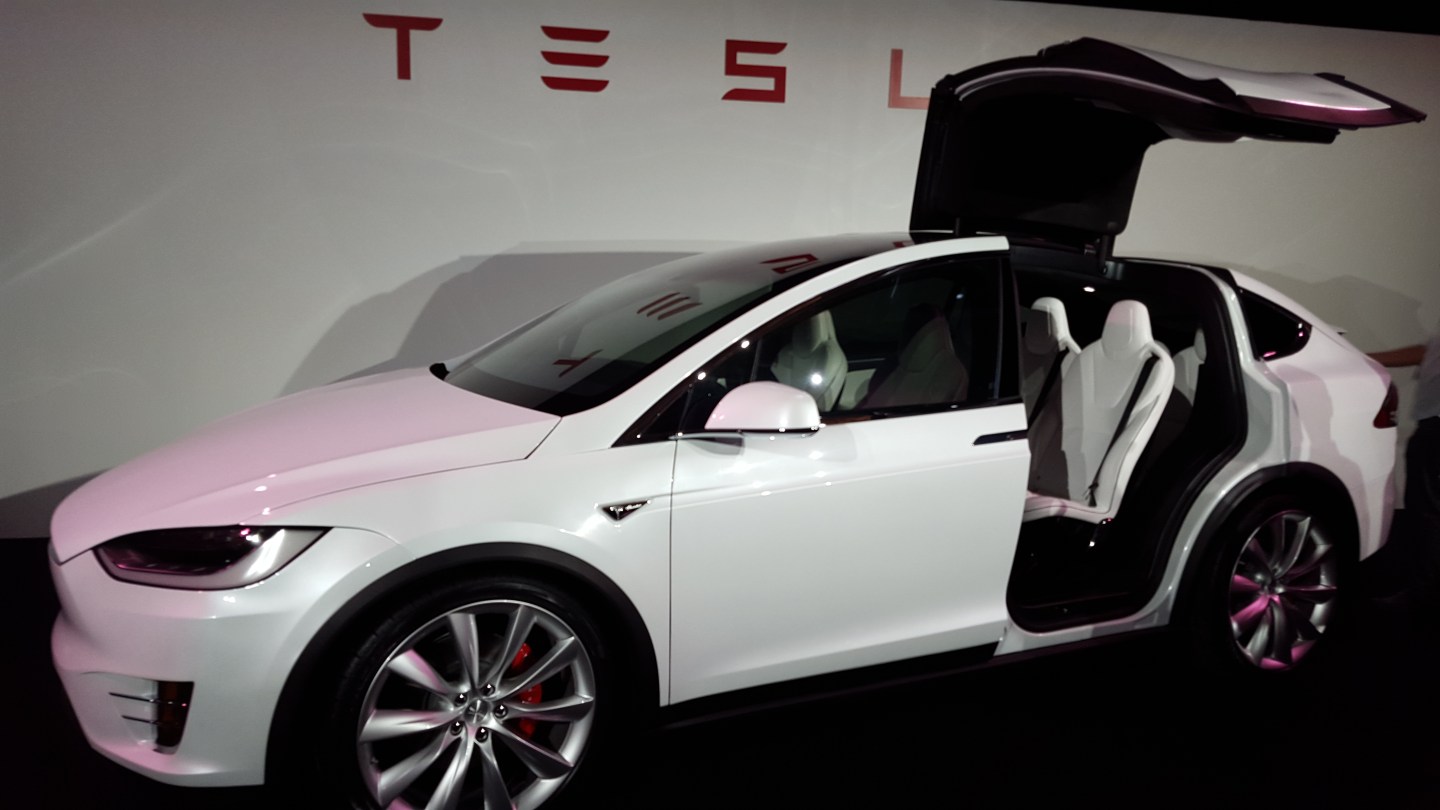 Maybe it’s the massive windshield or crazy-looking falcon wing doors. Or maybe it’s the “invisible chauffeur” that automatically pops open the driver’s door as he or she approaches.

Tesla Motors’ highly anticipated Model X SUV, publicly introduced and delivered to its first customers Tuesday night at the company’s Fremont, Calif. factory, is loaded with splashy features that compete for the title of most striking. There are so many of them, in fact, that Tesla Motors CEO Elon Musk admits that they are a bit excessive.

“I think we got more carried away with the X,” Musk said about an hour before the event. “I’m not sure anyone should make this car.”

Indeed, he had to delay the car’s delivery to customers who pre-ordered it by nearly a year. And even then, the company handed the keys to only six customers (one of them was Elon) at Tuesday night’s event.

“There’s far more there than is really necessary to sell a car,” Musk added. “Some of these things are so difficult; they do make the car better, but the difficulty of engineering those parts is so high, that in retrospect, if we had known the true engineering costs and the amount of complexity associated with it I think we would have probably done fewer new things.”

Here’s the nitty-gritty details, or specs:

The floor-mounted battery, similar to the Model S, gives this SUV a low center of gravity. However, there are four suspension settings, co-founder and CTO J.B. Straubel told me that let the driver raise the vehicle’s clearance, if necessary.

There’s also a HEPA filter system in the car that has three carbon absorption layers. “It’s like hospital operating room cleanliness in the car,” Musk said prior to the event.

The X is also equipped with mono-post seating, which allows it to have a flat floor and gives riders in the second row of seats space to place a bag or other items. The mono-post seats move independently and can slide and tilt forward and back.

A word about the windshield. It’s big. Really big. At 2.9 square meters, it’s the largest piece of glass ever put on a car in production, according to Tesla. The effect is remarkable—imagine a moonroof that connects to a windshield. However, this feature presented engineering and manufacturing challenges for Tesla, according to company executives. For instance, they had to create tinting that varied so the sun wouldn’t scorch the driver’s head, but wasn’t too dark at eye level. The panoramic windshield also meant that a sun visor couldn’t be placed in its normal spot.

And let’s not forget the doors. To say the front driver doors are “automatic” falls a little short. Ultrasonic sensors, placed behind metal as to not be unsightly, triangulate your position as you move towards the car. Once you’re near, the door “self presents,” which means it gently pops open without hitting you or anything else nearby. The driver enters the car, sits down, and the door closes all by itself.

Finally, the price. Musk, nor anyone else on the team released exact numbers. But he did say that the Model X with the same feature set as the Model S will be about $5,000 more.

The upshot to all of this? A car that, if ordered today, wouldn’t reach your door for 8 to 12 months, Musk said. According to Musk, there are between 20,000 and 25,000 pre-orders for the Model X, a number that the company has not revealed until now.

The Model X is a critical product for Tesla. And it’s not just about how many it can sell. The Model X is meant to broaden the company’s reach into a new customer base, primarily women.

It also marks a huge step for a company that, until now, only sold a sedan, the Model S. Now it will have two different cars to offer — and worry about manufacturing.

Tesla plans to ship between 50,000 and 55,000 Model S and Model X cars this year, a number that the company has acknowledged in recent months could be difficult to meet. To meet the goal, Tesla will have to increase production of the two cars at the same time at its Fremont factory.

The company spent much of 2015 preparing its factory to handle both Model S and X production. Tesla (TSLA) will have two body lines, the first dedicated to the Model S and the second for the Model X. Once the cars go through their respective body lines, they’ll merge and head off to paint. Once complete, they’ll go to general assembly where the both cars will be built on the same line.

Revenue from the Model X will also help pay for Musk’s grander aspiration: a cheaper all-electric car designed for the mass market. The Model 3 isn’t expected to be in full production for a couple more years. The public doesn’t even know what this car will look like. Earlier this month, Musk tweeted that customers will be able to start pre-ordering the $35,000 vehicle in March 2016. In a second quarter letter to shareholders, Musk said Tesla planned to reveal the Model 3 design in early 2016 with deliveries expected in late 2017.

Before the Model 3 can be produced, the company must be able to make a cheaper lithium-ion battery to put into the car. The electric automaker is building a $5 billion factory outside of Reno that it has said is designed with enough capacity to reduce the per-kilowatt-hour cost of its lithium-ion battery packs by over 30%. The factory, known as the Gigafactory, is scheduled to be complete by the end of 2017.

The public got its first look at the Model X three and half years ago at its design studio in Hawthorne, Calif., outside of Los Angeles. Prospective customers, who placed deposits to order a Model X, have stuck it out despite repeated delays. Deliveries of the SUV were initially pushed to the end of 2014, and most recently to the third quarter of 2015, which ends Wednesday.