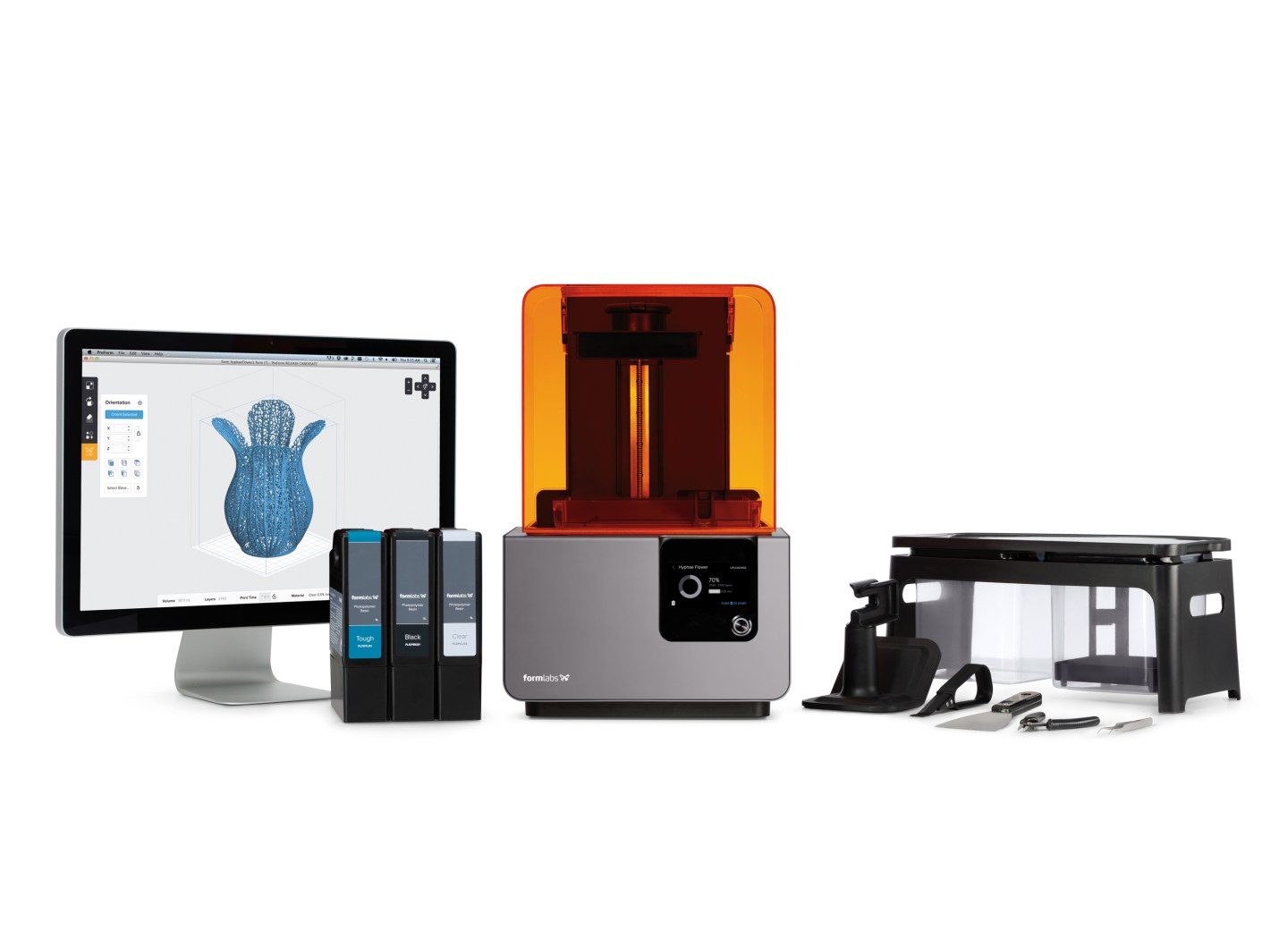 Before unveiling his startup’s new desktop stereolithography 3D printer at a launch event last Tuesday, Max Lobovsky, CEO and co-founder of Formlabs, sat down to watch the video of Steve Jobs introducing the Macintosh computer in 1984.

Jobs said the Macintosh was meant for two primary markets: The 11 million college-workers, which Jobs called the knowledge-workers of tomorrow, and the 25 million knowledge-workers who sit behind desks at medium- and small-size companies.

That, Lobovsky says, is the third and next wave of 3D printing—creating desktop versions of advanced 3D-printing processes, activities more at home on the factory floors of aerospace and medical device companies, that can be almost universally accessible to even the smallest companies. And he wants Formlabs’ Form 2 stereolithography printer to lead that wave.

Formlabs generated plenty of excitement when it first arrived on the 3D-printing scene. Founded out of the Massachusetts Institute of Technology in 2011, Formlabs’ mission was to create a truly “prosumer” desktop stereolithography printer: a 3D-printing machine for manufacturing professionals that uses lasers to make objects out of resin and is as easy to purchase as a new laptop. Close to 90% of Formlabs’ customers are manufacturers who need rapid-prototyping capabilities on site, but they aren’t all major companies, or even technology startups. Jewelers and artists, as well as universities and researchers, are also Formlabs customers.

“We never really believed that mass-consumer 3D printers were just around the corner,” Lobovsky says.

Its 2012 Kickstarter campaign raised almost $3 million for the development of the Form 1. After the Form 1+, another iteration of the company’s first stereolithography printer, Formlabs rebuilt the Form 1, making it 40% larger for bigger prints; equipping it with a resin cartridge system, analogous to how ink cartridges in a paper printer are changed, as well as a touchscreen interface for ease of use; and enabling wireless 3D printing. The result, the Form 2, is a printer Lobovsky says nearly anyone could use.

“It took me more time to set up a wireless printer than it took me to set up my Formlabs printer,” says Alex Berry, who founded a UK-based medical device company, Sutrue, that manufacturers automated surgical suturing devices. Many of the suturing heads on Berry’s devices are composed of 3D-printed parts, a task made easier after he purchased a Form 1 printer several years ago.

“The difference of having the machine next to you: I did four [suture heads] in a day and I didn’t try too hard. It cost me the equivalent of $150,” he says.

“The reliability question is the dirty secret of 3D printing: 3D printers don’t actually work every time, and that’s a big challenge to their adoption—at least the desktop ones,” Lobovsky says. “[The Form 2] can go from isolated people who are skilled enough to use these [stereolithography] machines to anybody working with 3D CAD.”

When Lobovsky talks about Formlabs’ target market, he invokes the same sort of precision Jobs displays in the 1984 Macintosh video: Formlabs printers are intended for the 20 million worldwide users of 3D computer-aided design software. If the first phase of 3D printing was about hulking industrial 3D printers that codified processes, and the second phase of 3D printing was about the hobbyist community using 3D printers, then the third phase, with printers like the Form 2, is about making 3D printing even more accessible by making it simple enough—and making the 3D printers small enough—so that it can go to every place where objects are designed and manufactured. At least, that’s how Lobovsky sees it.

“It’s an important development,” says Terry Wohlers, president of Wohlers Associates, of the Form 2. “Is it revolutionary? No. Is it evolutionary—have they evolved their technology by making it bigger and better, and easier to use? Yeah, absolutely.”

The Massachusetts-based Formlabs doesn’t release information on the number of printers it has sold, the number of customers it has sold printers to, or company revenue figures, but Lobovsky did say the company employs 120 people full-time now and that its customers have printed more than one million parts total.

“We have a machine, as far as we know, at every single Fortune 500 company that makes something: Tesla, Google, Apple,” Lobovsky says.

At $3,500, the Form 2 isn’t a desktop 3D printer likely to end up in the home. But that’s kind of the point. When talking about the evolution of desktop 3D printing, many companies today make the analogy to the personal computing boom of the 1980s, but Lobovsky argues they’re misremembering the history of computers.

Get desktop printers in small businesses first, Lobovsky says, and a mass-market, desktop 3D printer will be the next step for the 3D printing industry.