All of these CEOs have admitted to smoking marijuana 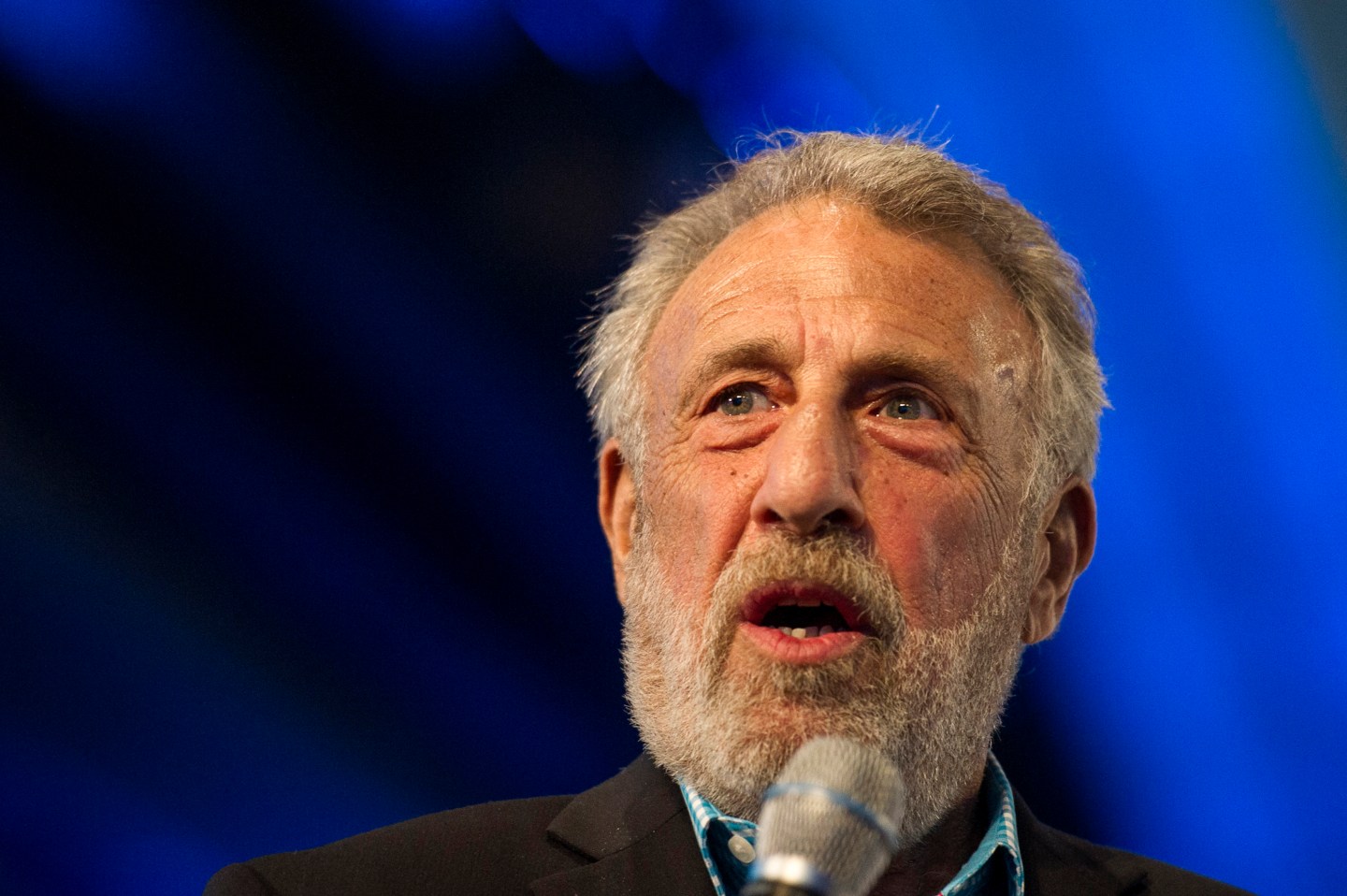 Earlier this month, at the second Republican presidential debate, former Florida governor Jeb Bush admitted to smoking marijuana “40 years ago.” For those who remember former candidate Bill Clinton’s tortured claim that he had smoked pot but never inhaled, it’s a sign of how much the times have changed.

Medical marijuana is now legal in 23 states. In Alaska, Colorado, Oregon, Washington and the District of Columbia, you can legally toke up for purely recreational purposes. According to the Federal Bureau of Investigation, arrests for simple possession are on the rise, but otherwise, the drug has never been more mainstream.

Many current and former CEOs have come out in favor of either decriminalization or legalization. Microsoft’s Bill Gates and John Mackey of Whole Foods have both gone on the record to support legalization, and across the pond, Sir Richard Branson went so far as to say that given the opportunity to do so legally, he “would invest” in the marijuana industry.

Some CEOs have also put their own money into efforts to legalize marijuana. The late John Sperling, former CEO of the for-profit University of Phoenix, threw $200,000 into efforts to pass Proposition 19, a 1996 medical marijuana initiative that lost at the ballot box. In 2000, he partnered with investor George Soros and others to raise $3.7 million for Proposition 36, which would have replaced prison time with drug treatment for nonviolent drug offenders. Facebook co-founders Sean Parker and Dustin Moskovitz also supported California’s Proposition 19, giving $100,000 and $70,000 respectively towards the campaign for California’s ballot measure to legalize marijuana.

There are also those who have done more than just voice an opinion or support legalization. Some business leaders have gone all-in and admitted to smoking weed themselves. They may characterize it as a youthful indiscretion, while others say that they’ve been at it for decades with no ill effect. Either way, it’s no longer the career-destroying taboo it used to be.

Fortune presents a list of seven current and former CEOs who have admitted to smoking pot, and we’ve included their positions on legalization when they’ve been made public.

Former three-term mayor of New York City Michael Bloomberg is founder, CEO and owner of the Bloomberg media company. In 2001, prior to running for mayor, he was interviewed by New York magazine and asked if he had ever smoked marijuana. Famously, he answered, “You bet I did. And I enjoyed it.”

In 2002, the National Organization for the Reform of Marijuana Laws Foundation initiated a $500,000 ad campaign featuring his face alongside the quote. It appeared in full-page ads in The New York Times, and if you weren’t a subscriber, you could see it splashed along the sides of New York City buses every time you went outdoors. This forced him to revisit the issue, and when he did, he said that he regretted making the comment and that he was opposed to decriminalization. He said he was ”a believer that we should enforce the laws, and I do not think that decriminalizing marijuana is a good idea.”

Virgin Group founder Sir Richard Branson’s desire to one day invest in the marijuana industry is founded on more than just his shrewd business acumen. The man named Top Social Media CEO by World of CEOs also has personal experience with the drug. In a 2007 interview in GQ, he told Piers Morgan that he smoked pot with his adult son, Sam, during an Australian beach vacation.

As a bonus, when Sam Branson smokes weed with his dad, the joints are likely to be rolled in expert fashion. The British entrepreneur also told Piers Morgan that he learned the art of joint-rolling from none other than Rolling Stones guitarist Keith Richards, whom one can safely assume has vast knowledge in that area.

Hugh Hefner launched Playboy magazine in the 1950s. His long history of marijuana legalization advocacy also stretches back several decades — the National Organization for the Reform of Marijuana Laws (NORML) was founded in 1970 thanks to an infusion of $5,000 from Hugh Hefner’s Playboy Foundation. Decades later, his views hadn’t changed.

“I don’t think there’s any question that marijuana should be legalized because to not legalize it, we’re paying the same price we paid for prohibition,” he said in 2010. “In other words, it is a medical concern and it should be handled that way.”

According to Patrick Anderson’s book, High in America: The True Story Behind NORML and the Politics of Marijuana, Hefner sang the drug’s praises in 1980, claiming that it made sex more rewarding. “Smoking helped put me in touch with the realm of the senses,” he reportedly told the author. “I discovered a whole other dimension to sex.”

Mark Johnson is the CEO and co-founder of Descartes Labs, a Los Alamos-based tech company. Prior to that, he was the CEO of Zite, a company based in Silicon Valley that created personalized news streams for mobile devices. When he was still at Zite, he told Bloomberg that he smoked marijuana day in and day out, and that pot use was so widespread among Silicon Valley tech workers that it simply isn’t an issue.

“People just don’t care,” he said. “If you do, you don’t need to hide it; and if you don’t, you accept that there are people around you that do.” He also pooh-poohed the idea that smoking pot would affect anyone’s productivity.

“Pot is an extremely functional drug,” he said. “Coders can code on it, writers can write on it.”

The late Peter Lewis joined the Progressive Insurance Company in a low-level underwriting position in the 1950s. A decade later, at the age of 31, he was its CEO, a position he retained until his retirement in 2000. He stayed on as chairman until his death in 2013.

Lewis used medical marijuana to combat chronic pain from a leg amputation he had undergone in 1998, and he has given generously and repeatedly to marijuana legalization causes. According to The Los Angeles Times, he donated over $1.7 million to California decriminalization measures between 1996 and 2010.

“I’m supporting the campaign because I support common-sense reform of the nation’s drug laws,” he said of his donation for Proposition 19 in 2010. “I admire the effort, energy and commitment of the people involved in the campaign, and want to help them get their message out to the voters.”

John Sperling, who passed away last year at the age of 93, was CEO of the University of Phoenix, a for-profit college that he founded in 1976. He was known as a bit of an eccentric, spending massive amounts of money on unsuccessful efforts to clone his pet dog, according to the New York Times.

Sperling also partnered with Progressive Insurance Company CEO Peter Lewis to donate money to marijuana legalization efforts. A prostate cancer survivor, he said that smoking marijuana helped him manage the side effects of the treatment he received for it.

Oprah Winfrey’s days as a talk show are over. However, she’s still the chairwoman and CEO of Harpo Productions and the chairwoman, CEO, and CCO of the Oprah Winfrey Network, so she’s definitely still in business.

Winfrey, whose net worth is $3 billion, has never given a position on legalization of marijuana, but she has twice admitted on national television to having smoked it. The first occasion was in 2013 on “Watch What Happens: Live,” when she said that she had last done it in 1982. The second was during a May appearance on “The Late Show With David Letterman” when she said she hadn’t “smoked weed in 30 years.”

George Zimmer, the founder and former CEO of Men’s Wearhouse, has been smoking pot for decades. He guarantees it.

In September, he told CNBC that he’s “been smoking marijuana on a regular basis for about 50 years.” He’s advocates legalization, and CNBC said that he’s expected to throw his support behind a 2016 California ballot initiative to legalize recreational marijuana use.

Men’s Wearhouse fired him in 2013, but he’s not bitter about it. In fact, he characterized it as “probably the greatest thing that ever happened to me.” He went on to create Generation Tux, an online tuxedo rental company, and zTailors, an online tailoring company.