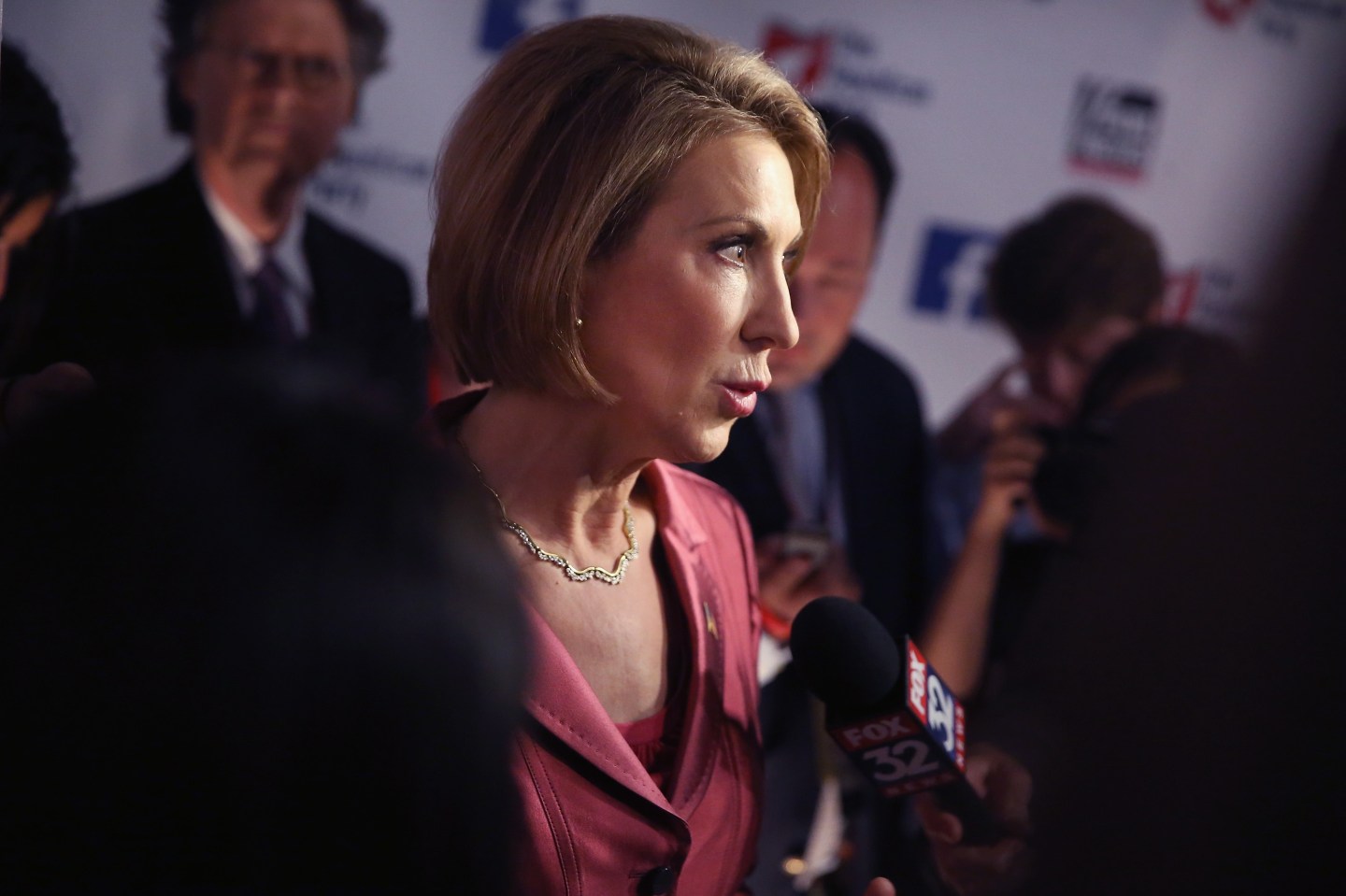 CLEVELAND, OH - AUGUST 06: Rebulican presidential candidate Carly Fiorina fields questions from the press following a presidential forum hosted by FOX News and Facebook at the Quicken Loans Arena August 6, 2015 in Cleveland, OH. Seven GOP candidates were selected to participate in the forum based on their rank in an average of the five most recent national political polls. The top ten polling Republican candidates will participate in a debate following the forum. (Photo by Scott Olson/Getty Images)
Photograph by Scott Olson — Getty Images

Carly Fiorina, the GOP presidential hopeful and former Hewlett-Packard CEO, began her close ties with the United States’ intelligence community shortly after receiving a phone call from Michael Hayden, then head of the National Security Agency, in the wake of the Sept. 11, 2001 terrorist attacks on American soil.

As the head of HP (HPQ), Fiorina had just what Hayden needed: computer servers. Truckloads of them, ready for distribution.

“Carly, I need stuff and I need it now,” Hayden remembers having told Fiorina, reports a Yahoo News account of that incident, which appeared on Monday. So the chief exec made a game-time decision. After receiving the call, she re-routed a shipment of the company’s servers that had been bound for a retailer to the NSA’s headquarters in Fort Meade, Md.

Fiorina’s donation first got major air-time after a story in the National Review recounted the event in May. Missing from the tale, however, were Fiorina’s feelings on the matter—especially in hindsight, given recent revelations about the extent of the NSA’s surveillance activities. In the recent interview with Yahoo reporter Michael Isikoff, she offers her view, and it contains no regrets.

MORE: “I worked with Carly Fiorina and her critics are dead wrong”

“I felt it was my duty to help, and so we did,” Fiorina told Yahoo of her decision to supply the NSA with computer equipment. “They were ramping up a whole set of programs and needed a lot of data crunching capability to try and monitor a whole set of threats. …What I knew at the time was our nation had been attacked.”

Later on in the piece, Fiorina appears to defend the NSA’s bulk data collection program, before diplomatically blessing its dissolution.

Fiorina said, “I’m not aware of circumstances” in which NSA surveillance “went too far,” although she supports “the checks and balances” put into place by Congress that ended agency bulk collection of phone records. She also suggested that there were greater government threats to privacy than NSA surveillance and other U.S. intelligence programs.

Fiorina, who has been positioning herself as a hawk along with her rivals in the Republican ring, also mentions that the NSA could be more transparent. For example, by offering more details about the data center it is constructing outside Salt Lake City, Utah. “People need to understand why, what is that for?” she said. “I think many people will be reassured” when they learn the details, she said. Read the rest of the interview on Yahoo.

For more on Carly Fiorina, watch this video below.