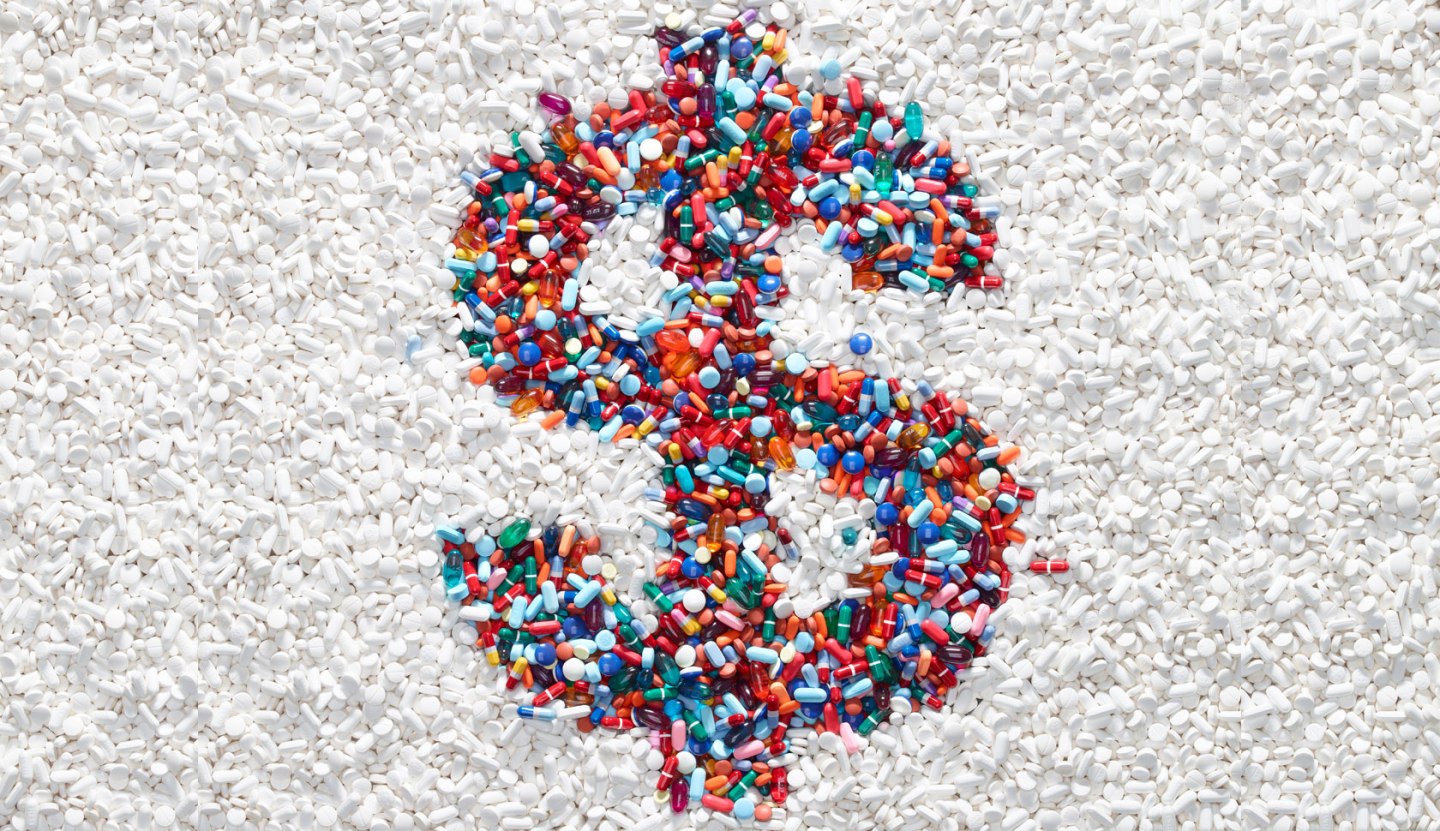 Drug prices have taken center stage since Turing Pharmaceuticals raised the price of its off-patent parasite-fighting drug Daraprim by over 5,000%, but the issue has been lingering for far longer than Turing has even existed.

Prices for brand-name drugs increased almost 15% over the past year alone, according to research firm Truveris. Meanwhile, the costs of lifesaving specialty cancer drugs have increased by an average of 10% per year since 1995, even when adjusted for inflation, according to one recent study. To put that in dollar terms, for every year a cancer drug added to a patient’s life in 1995, the cost was $54,100. That cost reached $207,000 in 2013.

(Turing’s CEO, Martin Shkreli, recently told Fortune that Turing would reinvest some of the new proceeds from Daraprim into further research and development to improve and develop alternatives to the drug. Valeant told the Wall Street Journal that the company’s duty is to maximize shareholder value, whether through price or volume.)

Dr. Peter B. Bach, director of the Center for Health Policy and Outcomes at Memorial Sloan Kettering Cancer Center, has become an articulate advocate for creating a stronger connection between the costs of drugs and the value they deliver to patients. Fortune recently sat down with Dr. Bach to talk more about what is behind the drug price mayhem and what could be done to stem the rise. The conversation has been edited for length and clarity.

What have been the primary forces driving drug prices higher?

It really is a system where there’s no downward pressure on drug prices, at least for the vast majority of drugs in the specialty space. There’s no natural binding mechanism on price, such as using value. Competition does occur sometimes, but it’s rare and reasonably ineffective, particularly in protected classes of drugs and in the generic drug space, like we saw with Daraprim.

These companies [like] Valeant (VRX) and Turing, have chosen to zero in on drugs that have reasonably small markets and limit or control distribution, then raise the price, knowing that the market won’t naturally correct itself any time soon. The only way to get the price lower today is for a competitor to enter, and for a new competitor to enter the generic market, they have to go through an FDA process which costs millions of dollars. And it takes several years.

Any competitors who look at it will say, hey, this is a small market. Even at this higher price if I do gain market entry, this entrenched company, like Turing, that already owns the distribution will just price me out of it immediately. There will be a price war against an entrenched competitor.

[What Turing’s doing] is a piece of financial engineering. I don’t want to give them too much credit. It’s not that clever. It’s taking advantage of the regulatory barriers to entry, which are ironically lamented by the pharmaceutical industry.

So do you see these factors reversing or slowing at any point?

Depends what you mean. In the generics space, there’s a limited number of drugs that will meet all these criteria, and they are by definition small-market drugs. Valeant sort of led the way here, and it doesn’t surprise me that other well financed companies are basically following in their footsteps–though they will eventually run out of products to do this with.

I think it has really gotten regulators’ attention. I haven’t seen the kind of move that would alter this, at least not immediately, but I don’t think this will spill over into large market drugs. It can’t because you need these special features.

What is the difference, then, when it comes to drug pricing and what’s happening with Turing versus the broader market of new, innovative drugs?

The most interesting thing about Turing is what happened [following the media coverage and backlash]. The company has gone on a media blitz, marching out battle-tested rationales for high drug prices and trying them out in its case. It’s not that what’s happened with Daraprim or Turing is different, it’s just that it’s so crystalline that you can see how hollow the arguments have been all along.

Drug companies aren’t saddled with these products. In Turing’s case, they formed the company, raised money from investors in order to buy Daraprim and do this exact thing. They then can’t turn around the next day, and say [we] are saddled with this drug and we have to raise the price.

Then there’s the argument: We have to charge a lot to fund our research. Somehow in the pharma model research is research, and success or not, it doesn’t matter. If you believe the cost of a drug should offset a company’s research, then the pharma companies with fewer drugs should have higher prices. They’re essentially spreading the research cost over fewer products because they’re less good at developing new drugs. That’s completely upside down.

Again, this argument collapsed under its own weight in Turing’s example, but the take home is that the R&D argument doesn’t make any sense. A system where we reward companies for being good at research, for cracking the code, for developing a new product, or for opening up a new avenue, that makes a lot of sense. That’s what every other market looks like.

Why is there a seeming lack of transparency when it comes to how companies decide on these drug prices?

We have a free-market system. No company is open about how they do their pricing, and [to do so] would probably be anti-competitive. So, you’ve followed the logical progression of the argument to one of its natural conclusions. This is sort of an interesting thing. The industry and its arguments are teetering between “we’re a public benefit regulated monopoly” and “we’re a private, for-profit company behaving like all other private, for-profit companies or publicly-held and for-profit.”

With a regular company like Apple (AAPL) or Exxon (XOM), we don’t know how they price their products, and we don’t care. Here, every time there’s a situation like prices rising faster than benefits, a 100-fold increase in cancer drugs, or 55-fold increase in Daraprim, it catches our attention. The rationales that get marched out are very much of the flavor of “we need to bring in this money to pay for XYZ,” and “XYZ” are things we should always care about as a society. I’m being sincere: things like better research, better access, better safety, and better compliance programs. We do care about those things, and we are willing to invest.

Frankly, we don’t really care if Apple is successful or not. It’s cool to have a new iPhone, but the very essence of our humanity doesn’t depend on the iPhone like it does on pharmaceuticals and other healthcare innovations. That idea leads you to [conclude], well, if that’s really the [drug price] math, then we need to see it. That moves pharma into the guaranteed-monopoly, regulated-profit world, the world of utilities and railroads.

Pharma is walking a line where they want total pricing control and they want to be opaque like any other for-profit company, but they want to use rationales that are in the public interest. It explains why now there are all these legislators saying, fine then, open your books. Let’s see your cost of R&D.

I think that’s the wrong way to go. The right way to go, as with any other for-profit company, is say that you can spend your money however you want, but we’re going to pay you based on the value of goods that you produce. You go figure out the most efficient way to do that. You could be a shell production and distribution company buying assets or you could have a whole bunch of researchers doing research, we don’t care. We’re going to pay you based on your success bringing products to market that effectively alleviates suffering. The more it alleviates suffering, the more we’re going to pay you.

Do you see the role of government heading in that direction?

The government is a participant here. They are already actively embracing a value-based system, which contemplates these components. We’re starting to see traces of it in pay-for-performance models or compliance models. Novartis has a deal on a heart failure drug where it is getting paid partially based on preventing hospitalizations.

I think the role of regulators and the government here is facilitating these programs and offering carrots and sticks for it. If we could use the drug abacus or the ICER report or some platform for finding an agreed upon value-based price, which I think we can do, then regulators could leave pricing discretion in the hands of the industry. If industry then goes along with charging a fair price for their drugs, they get preferential treatment from across the regulatory horizon. They get better exclusivity, they get faster review, they get the other sort of FDA items that cause them to fret. On the government program side, they get preferential tiering, they get formulary inclusion.

If the company chooses to do something like Turing just did or charge substantially more than the fair price, that’s fine, too. Again, they can seek to optimize their own future, but then they don’t get the benefits. They don’t get first tier, they don’t necessarily get formulary inclusion, their exclusivity period is shortened. You can imagine rationing up and down that period to link to recouping their money. If they want a quick hit and short exclusivity, I think that’s a reasonable approach.

And for more on the Daraprim story, see this recent Fortune video: