How the U.S. could cure drug-price insanity 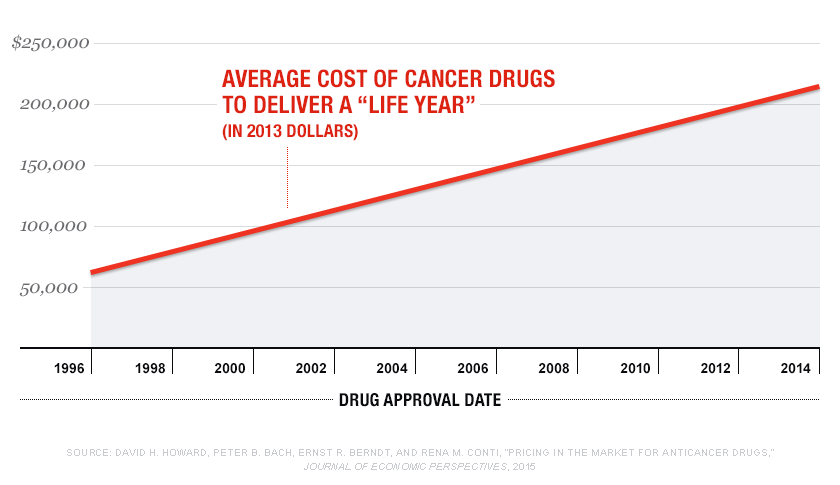 Back in the 1970s, my older brother and I would sometimes detour on our way home from school to our favorite used-comic-book store. An overflowing corner bin offered beat-up copies of The Flash, Batman, and The Fantastic Four, priced at a dime for one comic, a quarter for two.

My brother would joke that three must cost 50¢. He understood that the pricing was upside down, with the second comic costing more than the first. I guess that can happen in a store focused on people who can fly and see through buildings, but it shouldn’t happen in a world where pricing is rational.

Fast-forward to my life today: Less time for reading comic books, more time spent reading tables of specialty-drug prices, where I see a ­similar pattern. Prices are rising when basic rules of markets say they shouldn’t. Each step of progress costs more than the last; prices rise even when competitors appear, when the market size expands, when drugs work less well than hoped.

Take Eli Lilly’s (LLY) new cancer drug, Cyramza. For about $50,000 per treatment course, Cyramza with chemotherapy increases the life span of patients with colon cancer by about 1.6 months, according to the study that led the Food and Drug Administration to approve this use. But Genentech’s 10-year-old drug Avastin adds 1.4 months of life, while costing just $25,000, according to a similar study. In effect, the additional 0.2 months—roughly six extra days—from Cyramza costs as much as the 1.4 months from the older drug.

Across the universe of these drugs, prices are rising faster than benefits. In 1995 the average cost of using a cancer drug to deliver a “life year” of benefit to a patient was around $50,000 in current dollars; today that precious year costs about $225,000.

It isn’t just new drugs that are driving prices higher. Gleevec, Novartis’s (NVS) important leukemia drug, cost $3,000 a month in 2001, adjusted for inflation; it now costs more than $9,000 a month. If the drug served only a small niche, this might make sense. But Gleevec’s market has broadened and deepened over time, as the FDA has approved new uses. The increase can’t be explained by a lack of competition either. Sprycel arrived in 2006, and Tasigna in 2007, yet Gleevec’s price has kept going up, as have those of its competitors. Name another sector where that happens.

Drugmakers argue that high prices reflect the bene­fits of their products to patients and help them recoup costs for the many paths to discovery that turn out to be culs-de-sac. Often they point a finger at the burden of regulations.

That last argument rings particularly hollow because the FDA recently enacted shortcuts that have eased approval for some drugs. Amgen’s (AMGN) leukemia drug Blincyto was approved last year, and Medicare agreed this summer to give hospitals money to buy it, without the company having to show in an expensive randomized trial that the drug saved lives or even that it worked better than any current drugs. In a normal market the savings from these shortcuts would be passed on to patients. Yet Amgen charges around $60,000 a month for ­Blincyto—more than twice the annual income of the typical person in Medicare. (Amgen told the Wall Street Journal that the price in part reflected “the complexity of developing, manufacturing, and reliably supplying” the drug.)

To criticize drug pricing is to raise a more difficult question: Is any price too high to save or extend a life? But in the U.S., prices are rising not because they must, but because they can. No entity holds them down. Instead, state and federal regulations require nearly every insurer to provide access to all cancer drugs, which means the companies can charge what they like. Doctors, meanwhile, are trained not to consider the cost of a treatment when making medication choices.

“Prices are rising when basic rules of markets say they shouldn’t. Each step of progress costs more than the last; prices rise even when competitors appear.”

We need a different system, in which the innovation we dearly need is also innovation we can comfortably afford. Rather than paying the price the company wants to charge, we should pay based on the value of what the company has produced. We’d have to define “value”—a term that means different things to different people—but the definition should encompass the value not only to patients but to science and society as well.

We don’t have this kind of model in the U.S., but we could. My Memorial Sloan Kettering colleagues and I have developed a proof-of-principle platform called DrugAbacus. The model incorporates multiple components of value that can be changed depending on what approach makes the most sense. For instance, the user can decide to give more or less value to the amount of benefit patients get from a treatment (as measured in additional life years) or to how much it cost to develop.

This is not uncharted territory. In Europe health care systems anchor drugs’ pricing to their value; the U.K.’s National Health Service will not include drugs in its formulary if their cost exceeds their value to patients.

What would paying for value look like? If its price were based primarily on life years added, Cyramza would cost a little more than Avastin for those extra 0.2 months, but not twice as much. Blincyto and other drugs would cost a fraction of their current price. My hospital rejected Sanofi’s drug Zaltrap after we ran a DrugAbacus-like calculation and deemed it too expensive. The manufacturer then halved the drug’s price for its U.S. customers.

If we link drugs’ prices to their value, we can continue the vital quest to lengthen and improve people’s lives. We can draw a bull’s-eye around the places where innovation is needed most. And we can mandate that treatments be affordable for patients. This last, vital part of the formula would require insurers to jettison the multi-thousand-dollar co-payments they often tack on to expensive specialty drugs.

I usually left my comic-book store with just one magazine; my brother sometimes grabbed two. We never found out how much a third one would have cost. But in health care, we do know that spending on cancer and other specialty drugs is likely to more than double, to $400 billion annually, by 2020. Patients are being driven into bankruptcy, while Medicaid and the Veterans Administration have been driven into the red. If we want innovation, and we certainly do, the solution to affording it lies in paying only for its value.

A version of this article appears in the September 15, 2015 issue of Fortune magazine with the headline “Seeking a cure for drug-price insanity.”