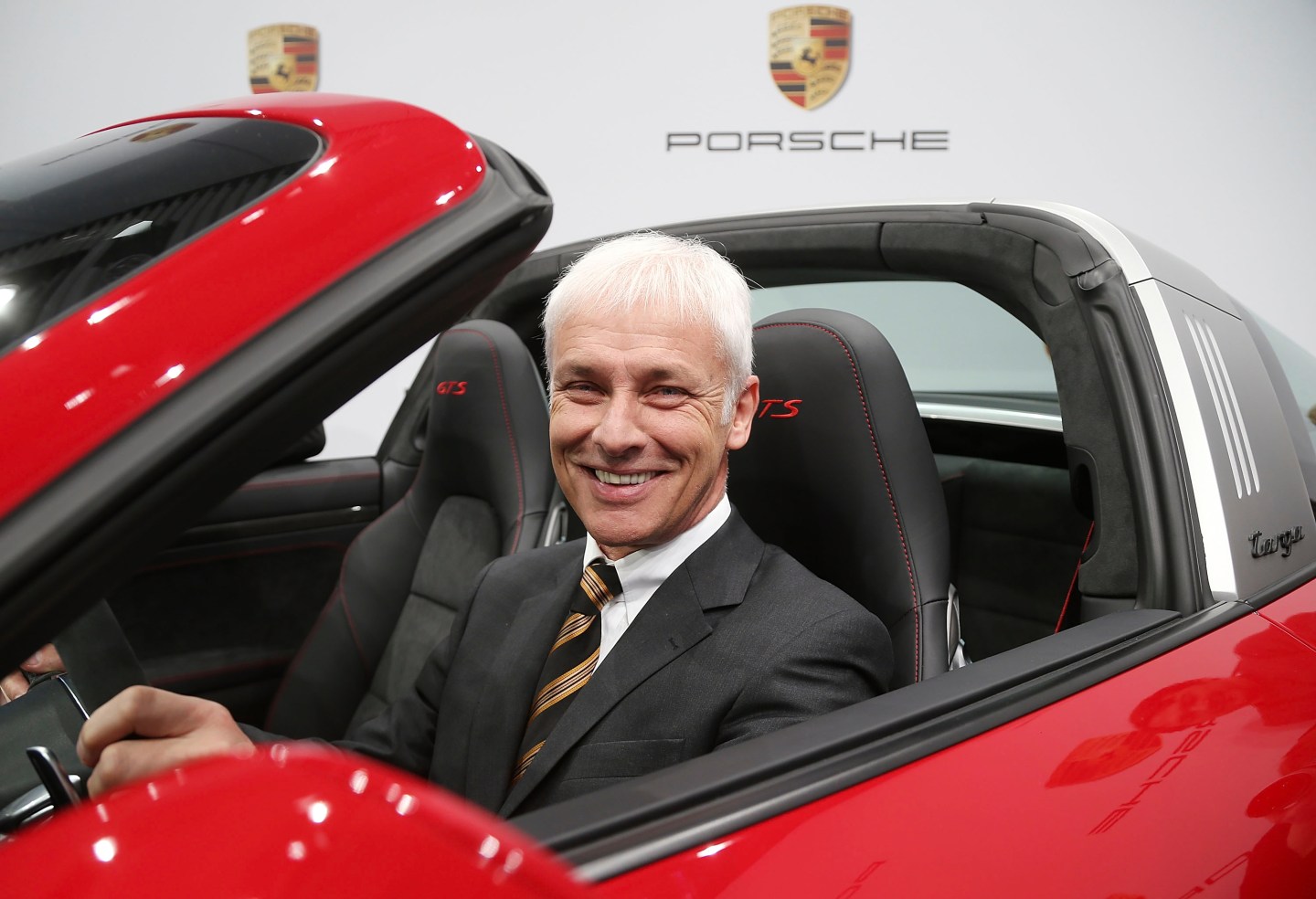 STUTTGART, GERMANY - MARCH 13: Matthias Mueller, CEO of Porsche AG poses in a Porsche Targa 4 GTS at the Porsche AG annual press conference on March 13, 2015 in Stuttgart, Germany. The conference focused on the successful return of the Porsche team to top-line endurance racing and the record revenues and earnings in 2014. (Photo by Thomas Niedermueller/Getty Images)
Thomas Niedermueller Getty Images

Who’s the leader most worth watching now? The field of candidates is crowded and includes the new Speaker of the House, whoever it might be; Vladimir Putin, craftily widening his influence in the Middle East; and President Obama, negotiating with Putin and others at the U.N. this week while fencing with congressional Republicans over their threatened government shutdown.

But for anyone wanting to learn more about leadership—for better or worse is not yet clear—I don’t see how you can beat the real-time case study being offered by new Volkswagen chief Matthias Mueller, who replaced the fired Martin Winterkorn on Friday. He faces one of the largest leadership challenges in recent business history. It’s even more challenging than it may seem to observers outside of Europe because the emissions-testing scandal that has engulfed VW is a crisis not just for the company but also for Germany.

The country is the world’s No. 3 exporter, behind China and the U.S. (and it’s only barely behind the U.S.). Germany lives and breathes exports, and a scandal at the country’s largest company is seen as a disgrace to the nation. The nature of the scandal makes it even worse. Germany’s pride, its global economic brand, is engineering, and the VW scandal begins with an engineering failure: The company couldn’t get its diesel engine emissions to be acceptably low. So it installed software that cheated on emissions testing in order to conceal its failed engineering. You couldn’t write a scenario to humiliate German business before the world much worse than that.

Mueller must repair relations not just with millions of customers worldwide but also with millions of Germans. He’ll have to do it while government prosecutors are vigorously investigating and quite possibly prosecuting Winterkorn and other VW executives. The country’s transport minister has already said that “Volkswagen tampering was undoubtedly illegal.” The company announced that its initial estimate of 11 million vehicles affected worldwide was too high, and the real number is five million; but the transport minister also announced that 2.8 million vehicles in Germany were rigged for emissions cheating. Several other countries have begun investigations, including a U.S. criminal inquiry, and Japan, South Korea, India, Brazil, Australia, South Africa, and Norway have also launched investigations.

It gets worse. In addition to the prospect of executives charged with crimes and staggering fines imposed by regulators worldwide, VW faces monumental liability in private actions. A class action suit has already been filed in the U.S. on behalf of customers, and more suits by customers and shareholders are certain.

And then there are the people Mueller is actually leading, VW’s 600,000 employees. They’re feeling personally disgraced. VW was one of the jewels of German industry, and Mueller must find a way to help them feel proud again that they work there.

He’s caught in the classic vice of crisis leadership: He must be highly visible, seen by all to be leading, at just the moment when a hundred urgent priorities demand that he be in conference rooms and on phone calls, invisible to the world. The one advantage he has, and it’s slight comfort, is that he doesn’t have to persuade anyone there’s a crisis.