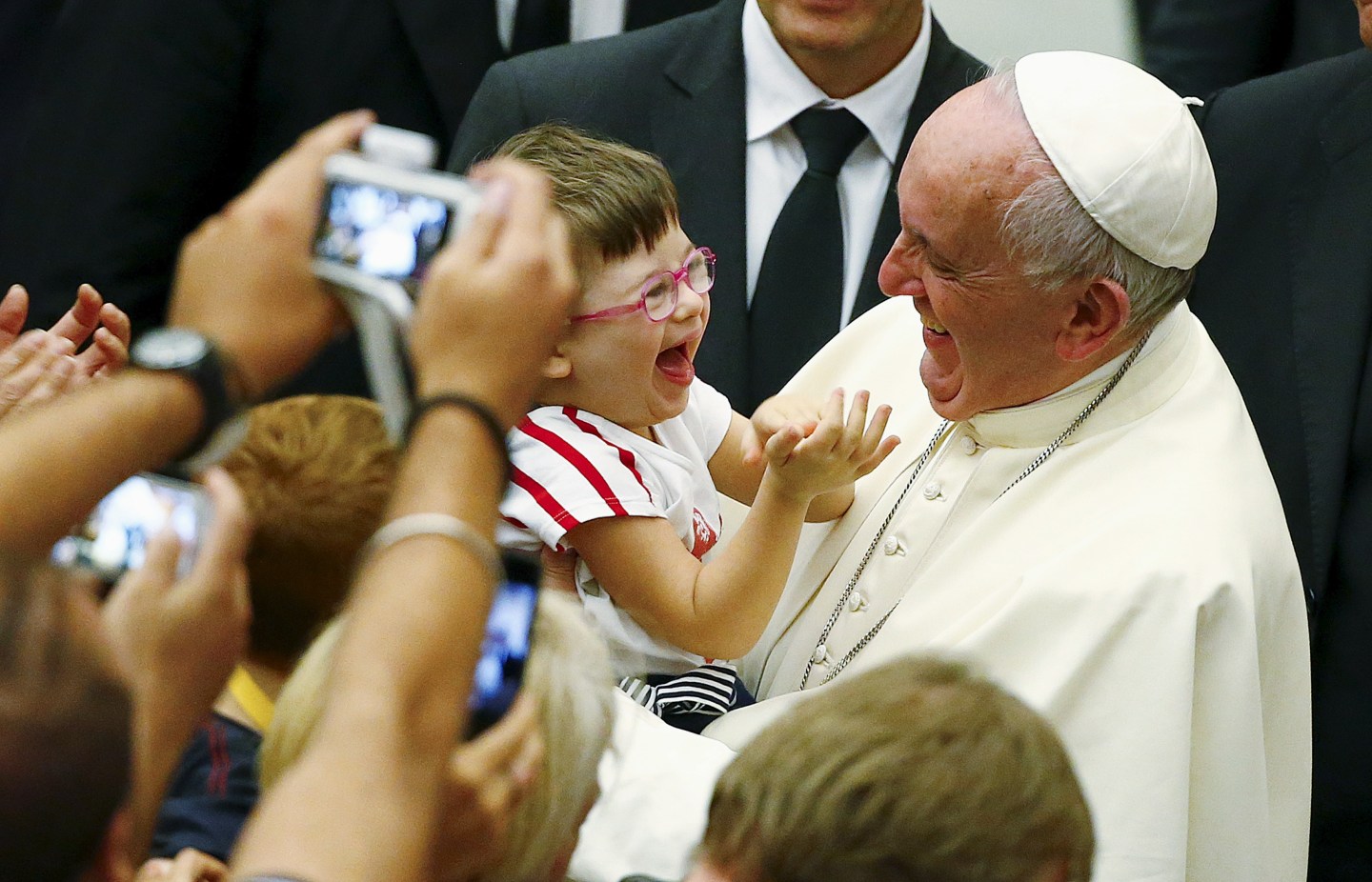 Technology may not be the Pope’s favorite topic, but the industry is playing a key role in his upcoming visit to the U.S.

Pope Francis, who has been called the most progressive pope in decades, has a well-documented love-hate relationship with technology. After former Pope Benedict XVI stepped down in 2013, it took then-Cardinal Jorge Bergoglio an extra day to receive word because he didn’t use e-mail. He has called himself a “dinosaur” when it comes to technology and has no interest in watching television or learning how to use computers. His Twitter account, while active, is manned by staffers.

Despite that, tech will play an important role in Pope Francis’ visit this week.

According to some estimates, over 1.5 million people will take to the streets of Philadelphia later this week to see the Pope. Many in attendance will be holding up their smartphones and tablets, hoping to snap a photo of the leader of the Roman Catholic Church. Expecting significant demand for their networks, Verizon (VZ) and AT&T (T), the two largest carriers in the U.S., announced last month that they have invested $24 million and $23 million, respectively, to enhance network infrastructure in the area to ensure spectators have cellphone service.

According to a CBS Philly report, AT&T has erected 15 small towers to provide extra service to users around the city. In an interview with Fortune, Verizon spokesman John O’Malley said his company has been working on the papal visit for 18 months and used “past large-scale events,” including presidential inaugurations and New Year’s Eve, to determine how much capacity would be required on cluttered networks.

“We’ve invested more than $24 million in our downtown Philly network, effectively quadrupling our network capacity,” O’Malley said. “In addition to our permanent sites, we’ve built new sites, added capacity to all our sites…and will bring in about half a dozen mobile cell sites to boost our capacity. And with the exception of the mobile cell sites, all this infrastructure is permanent and will remain in place for years to come.”

Then there’s the issue of security. Pope Francis is notorious for riding around in a fortified Popemobile so he can be closer to the people. Still, the New York Police Department (NYPD) isn’t taking any chances and last week showcased the high-tech gadgetry it will employ to keep the Pope (and spectators) safe. Chief among those devices is a bomb-disposal robot with a special arm that’s capable of remotely opening potentially dangerous boxes.

Oddly, some technology has also found its way onto a list of banned items for the event. Surprisingly, law enforcement officials have banned selfie sticks. Although they failed to explain why they’re now a no-no, it’s possible that the sticks—which allow users to hold out their smartphones on a stick and snap photos—may easily be mistaken for a dangerous object. Another popular product that’s been nixed? Consumer drones.

Not even the mighty Apple can outshine the Pope this week. The iPhone 6s and iPhone 6s Plus are scheduled to reach stores on Friday. UPS (UPS), said in a notice last week that it’s expecting interruptions across New York City and Philadelphia on Friday. While the Pope is in town, the company will be unable to pick up or deliver packages in certain zip codes, including major parts of Manhattan and Philadelphia. It’s unclear how that may affect iPhone deliveries both to customers and Apple stores. Apple did not respond to a request for comment.

Ultimately, however, it’ll be social networks that will bear the brunt of the Pope’s visit. Major events always feature prominently on social media sites and all signs point to the Pope’s visit being a monumental event. Twitter on Tuesday said that it’s already seeing an uptick in Pope-related conversation and has launched “special emojis” that can be appended to any tweet featuring a Pope-related hashtag. Indeed, before long, Twitter (TWTR), along with Facebook (FB), Instagram, and others, will be filled with Pope-related content of all kinds, and it may be difficult to find something that isn’t related to the Pontiff over the next few days.

“It used to be that all you had to account for were voice calls and maybe text messages,” O’Malley said. “Now we need to prepare for people uploading pictures and videos to social media accounts like Facebook, Twitter and Snapchat.”