The 10 biggest corporate layoffs of the past two decades 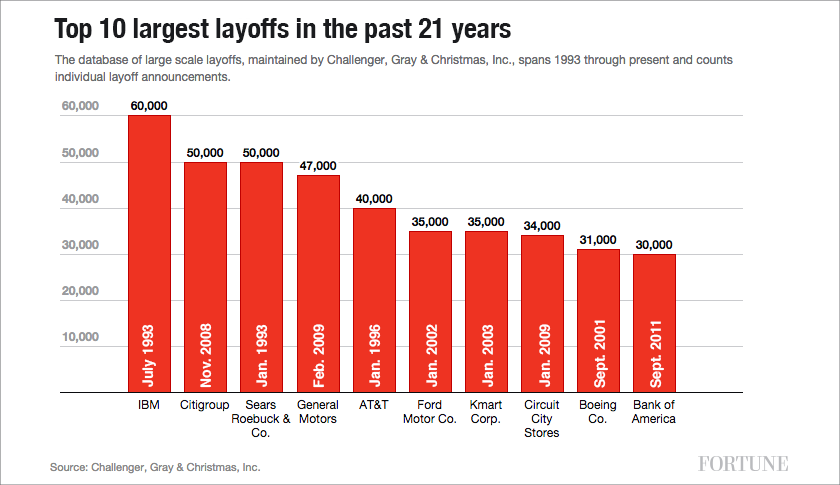 When Hewlett-Packard last week announced that it planned to lay off 28,000 to 33,000—or about 10%— of its 300,000 workers, Fortune compared the size of the reductions to a “small city.” They’re part of the ‘pruning’ that CEO Meg Whitman says is necessary as the company plans to split in two on November 1. The company’s division into an enterprise business that sells data center gear and software and another that sells PCs and printers is aimed at making HP more nimble.

No matter the rationale, there’s no getting around the fact that the expected cuts are mammoth, much like the rounds of layoffs the company has already undergone. Including the latest downsizing, the company will have eliminated 83,000 to 88,000 jobs since Whitman took over in 2011.

But despite its size, HP’s layoffs are not the largest of the lot in the recent past. According to outplacement firm Challenger, Gray & Christmas, the following companies can claim that ominous distinction.

In the early 1990s, IBM's core mainframe business was becoming obsolete with the emergence of the personal computer and the client server. To shift the company to focus on providing integrated solutions for customers, CEO Louis Gerstner set aside $8.9 billion—one of the largest financial charges in corporate history at that point—and cut 60,000 positions.

As the credit crisis took hold of Wall Street, Citigroup announced 50,000 job cuts—more than half of a which were the result of planned divestitures. At the time, Citigroup CEO Vikram Pandit, who'd been in his job less than a year, said "there is nothing easy about these decisions and the impact on our people. We do this because we must and not because we want to."

To compete with the lower-cost models of Wal-Mart and Toys 'R' Us and to reverse what had been a decade-long decline of its retail business, Sears announced in 1993 that it was eliminating its storied "big book" catalogues, which had been a mainstay in rural American homes for 97 years. The discontinuation of the catalogue and the shuttering of 113 stores were part of a larger revamp that cost the company 50,000 jobs.

General Motors substantially reduced its headcount in early 2009 as it prepared to enter Chapter 11 bankruptcy and sought federal aid. The car company also closed five factories in conjunction with the cuts and announced plans to phased out its Hummer brand and scale back its Pontiac line. At the time, the automaker was reeling from the global recession and competition from Japanese manufacturers.

Unlike other layoff incidents on this list, AT&T's decision to cut what was at the time 13% of its workforce came when almost all of the company's divisions were profitable and growing. The reductions were part of the telecom giant's plan to split itself into three separate companies that would focus on communications services, telecommunications equipment, and computers.

In the wake of the economic contraction that began in 2001, Ford struggled to cut costs and and boost profits. Its plan to eliminate 35,000 jobs came in conjunction with the phasing out of its Ford Escort, Mercury Cougar compact car, Mercury Villager minivan, and the Lincoln Continental. CEO William Clay Ford Jr. said the layoffs were painful but necessary, and he pledged to take no salary or bonus other than stock options as the company continued to reduce costs.

Amid increased competition and declining sales, Kmart announced workforce reductions along with the closure of 326 stores. At the time, the discount retailer was undergoing a massive reorganization as part of its Chapter 11 bankruptcy; the year before, it had cut 22,000 jobs and shuttered 283 stores.

Circuit City put all of its employees out of work when it decided to cease operations. The company, which had been the nation's No. 2 electronics retailer, had been hit by historically low holiday sales in 2008 and the credit crunch, which restricted its ability to borrow. The company was in bankruptcy when it announced the closing of its 567 stores, eliminating all of its 34,000 jobs.

The reductions to the aerospace and defense company’s workforce in September 2001 hit Boeing's commercial division. An overall economic slowdown and the 9/11 terrorist attacks slammed air travel and prompted the cuts. Former Ford CEO and current Google board member Alan Mulally oversaw Boeing’s commercial division at the time. He said the layoffs were “just a sad thing for all of us.”