Don’t expect AB InBev-SABMiller to become a mega-brewer in the U.S. 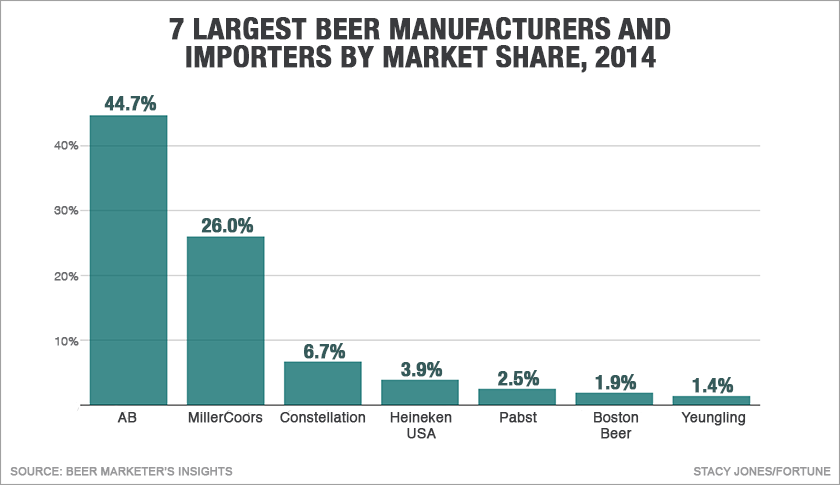 Before Anheuser-Busch InBev and SABMiller investors even think about toasting a potential tie-up, they need to consider that a merger, where the combined giant would sell seven out of 10 beers in the U.S., would never make it past trustbusters without major divestitures.

AB InBev rocked the beer world Wednesday when the brewer confirmed that it approached SABMiller’s board of directors to discuss a possible merger. Together the two companies are currently worth some $245 billion, and combined, they would control more than two-thirds of the $101.5 billion U.S. beer market, which is the largest in the world. But that doesn’t mean “Big Beer” is about to become “Mega Beer.”

“There is no way that AB with 45% market share could acquire an interest in the No. 2 player,” says Benj Steinman, editor of industry publication Beer Marketer’s Insights. “That is a no-starter from an antitrust perspective.”

A deal between AB InBev, whose top-selling brand in the U.S. is Budweiser, and SABMiller gets complicated in the U.S. by SABMiller’s joint venture with Canada’s Molson Coors (TAP). That venture, called MillerCoors, sells brands including Coors Light and Miller Lite and is the second-largest brewer in the U.S. with about 26% of the total beer market, according to Beer Marketer’s Insights. AB is first with 44.7%, while Corona producer Constellation Brands (STZ) is a distant third with 6.7%.

Remember that the Justice Department sued AB InBev back in 2013 over its $20.1 billion bid for Mexican brewer Grupo Modelo. The feds were worried that AB InBev would control too much of the market, resulting in potentially higher beer prices for American beer drinkers. And that deal would have only combined the largest and third-largest beer firms – a potential AB InBev-SABMiller deal has far bigger implications.

The federal government’s actions led AB InBev to sell off the U.S. assets of Grupo Modelo to Constellation Brands, giving its smaller rival labels that included Modelo Especial, Victoria, and Corona. Constellation – which was founded as a wine producer and also has a small spirits business – has done quite well with the acquisition. Shares have surged nearly 500% since it became clear that Constellation could get control of Modelo’s U.S. beer business.

“DOJ didn’t allow the U.S. absorption of Modelo without a selloff, so it is hard to think that they would allow absorption of Miller,” wrote Brewers Association director Paul Gatza in a blog post.

A similar divestiture could occur for MillerCoors, in which SABMiller and Molson Coors each have 50% voting interest, though SABMiller has a larger 58% economic interest in the business.

With close to a hundred beverage brands between AB InBev and SABMiller worldwide, it’s still too early to say what would go on the selling block, but top shoppers would likely include Molson and Heineken. Constellation and Carlsberg could also be interested. MillerCoors last year generated $1.33 billion in net income and total net sales of $7.85 billion. As the industry trade group the Brewers Association points out: Those profits are “very attractive to somebody.”

A deal for MillerCoors wouldn’t create the same home run that Constellation scored. Market share for Constellation’s beers has swelled to 6.7% from 2.4% back in 2005. Mexican imports have sold well in the U.S. thanks to a growing Hispanic population and greater interest in session-style beers that are produced abroad. But beer experts say those beers are stealing market share from U.S. stalwarts Coors Light, Bud Light, and Miller Lite, which target a similar demographic. Market share for MillerCoors, meanwhile, has slipped from 29% to 26% over the same time period.

A potential break up of the MillerCoors venture could also kill an uneasy relationship between SABMiller and Molson, a partnership that has existed since 2008. A number of reports say the brewers haven’t always seen eye to eye on how to best tackle the U.S. market. Molson even sued SABMiller back in 2013 over a licensing agreement in Canada.

“It raises a lot of question marks for the future,” Steinman of Beer Marketer’s Insights said about a potential AB-SABMiller deal. “You don’t have great visibility into how this plays out.”