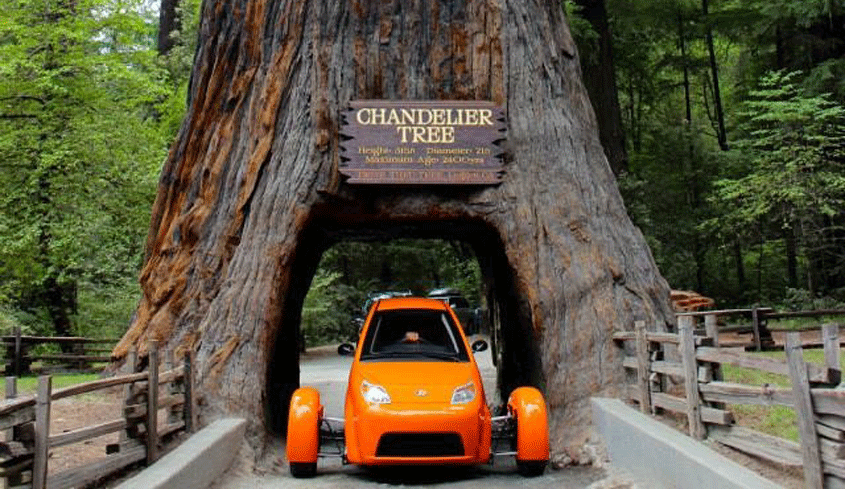 The line between the technology and automotive industries continues to blur, and more startups are creating services and products that could transform the transportation sector. Which are the most promising? The Los Angeles Auto Show’s Connected Car Expo recently assembled executives from Microsoft (MSFT), Google (GOOG), AT&T (T), and others to vet dozens of companies. Here are the 10 chosen as the hottest startups. “[They] impressed us with their unique perspective, the strength of their vision, and their flat-out innovation,” says Michelle Avary, lead advisory board member. “These companies are beyond just cool—we think they will help make the entire automotive industry better.”

The Elio will be a fuel-thrifty vehicle and cost just $6,800. It is due to go on sale in 2017.Courtesy of Elio Motors

Founder Paul Elio has engineered a super-efficient, low-cost ($6,800) three-wheeled vehicle. Legally classified as a motorcycle, it seats two people front to back, making it half as wide as a typical car and therefore twice as aerodynamic. The result: gas mileage of 84 mpg. Following the Tesla model, Elio, based in Detroit, will sell directly through retail stores to consumers. When you need service, you can take it to any of the 600 Pep Boys shops across the U.S. Production begins in 2016; already the company has taken more than 45,000 orders.

This Silicon Valley startup’s voice-recognition technology can be contained on a chip, so it provides high-quality results without the need for an Internet connection. Using pattern recognition, Capio’s algorithms also can identify extraneous background noises and learn to ignore them. Capio says it can embed its chip into any existing vehicle and will begin delivering to a major automotive supplier later this year.

This German firm has developed software for automakers that enables users to make themselves “visible” to their cars via a smart device. So any vehicle you get into knows who you are and how you like to drive, and it can read real-time information, such as your heart rate from a Fitbit (FIT) and other wearable devices. BMW featured High Mobility’s systems at the Consumer Electronics Show this year to demonstrate exactly how a smartwatch could be used to operate an i3 with gesture control. The software will come to market through car companies and connected-car service providers.

One of the problems working parents face is, Who will drive their kids to after-school activities? Three Los Angeles professionals who are also mothers created an Uber-style app that rigorously screens applicants’ driving records and child-care experience. The company currently services the greater Los Angeles area and plans to expand to other
U.S. cities.

The Albuquerque company makes powerful semi-conductor lasers that help self-driving cars “see” and thus react appropriately. From an area the size of your thumbnail, TriLumina’s sensors deliver five kilowatts of optical power—the equivalent of 80 high-beam headlights. TriLumina expects to be in market with its solid-state LiDAR sensors in 2017.

Using the multiple sensors embedded in a cellphone, Driversiti’s software replaces a car’s active safety systems. It is designed to learn your driving habits and alert you if there’s a sudden and potentially dangerous change, such as sloppy steering. It can also identify hazardous road conditions and feed that information in real time to the cloud. Driversiti says it has the only patent for crash detection by a smart device. It will begin licensing its software to businesses such as car clubs, trucking giants, and car manufacturers next year.

Quanergy says its LiDAR sensors are more accurate, powerful, and reliable than any competitor’s.Courtesy of Quanergy

Self-driving cars rely on several types of sensors, including light detection and ranging (LiDAR) systems, in order to instantaneously monitor their position on the road and distance from other objects. LiDAR systems are pricey, costing from $8,000 to $100,000 or more per unit. Quanergy, based in Sunnyvale, Calif., says it has invented a version that costs $100 and is more reliable and accurate than its competitors’. Mercedes has already signed on as a partner.

Nebula Systems’ Mech 5 is a B2B cloud-based platform that securely aggregates all the real-time data that cars generate today through their electronic control units (ECUs). Nebula says its software can also remotely diagnose and fix faults in any vehicle’s ECU. Roadside assistance companies, marketers, fleet managers, and telematics suppliers are among Nebula’s customers.

This San Francisco startup created an app that enables car owners to earn extra money by letting screened drivers rent their vehicle when it’s not in use. Renters input their driver’s license and credit card information, then search for the type of car they want; the app unlocks it for them. Insurance, roadside assistance, and screening are included. The company has rolled out in the Bay Area, Chicago, Portland, Ore., and Washington, D.C.; New York City is next.

Located in Waterloo, Ontario, Sober Steering has devised a touch-based biosensor technology that can be installed in a steering wheel to read a driver’s blood-alcohol level. Sober Steering’s Zero Tolerance system is already available for fleet vehicles such as school buses, trucks, and construction equipment. A passenger-vehicle version is expected to come to market next year.

A version of this article appears in the September 15, 2015 issue of Fortune magazine.

Correction: This story has been corrected to reflect that that the company, HopSkipDrive, is one word, not three.