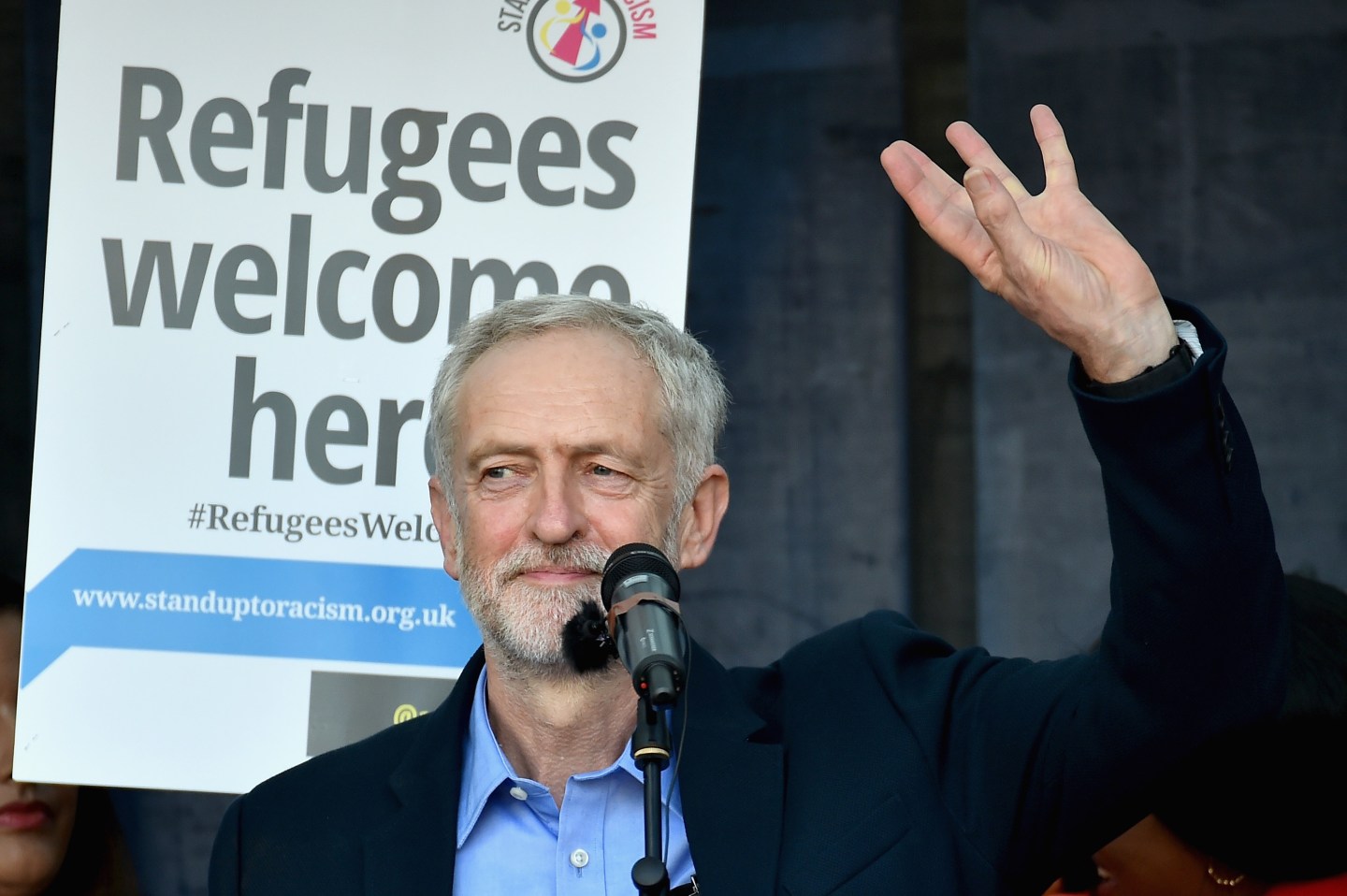 <> on September 12, 2015 in London, England. The demonstrators are calling on David Cameron to accept more refugees already in Europe. Earlier in the week he announced the UK would take 20000 Syrians from refugee camps over four years.
Photograph by Jeff J Mitchell — Getty Images

Far-left candidate Jeremy Corbyn was elected leader of the U.K.’s Labour party Saturday with a landslide victory that threatens to divide the opposition party.

Labour suffered a heavy defeat in the U.K.’s general election earlier this year, and senior members have since warned that Corbyn’s socialist ideas would alienate moderate voters and make the Labour party unelectable.

Corbyn won almost 60% of the vote, the Associated Press reported, putting him far ahead of his closest rival Andy Burnham, who won 19% of the vote. Some 422,664 votes were cast, the AP said.

Markets usually pay little heed to opposition party leadership elections, but the emergence of hard-left Eurosceptic Corbyn as the frontrunner to head Britain’s Labour party had made investors twitchy.

The key concern is that Corbyn’s leadership victory could increase the risk of “Brexit” — a British vote to leave the European Union in a referendum pledged by the end of 2017 but which may come as soon as next June.

Brexit fears have already pushed the cost of hedging against big swings in the sterling/dollar exchange rate to the highest since May’s national election. Analysts hesitate to blame the rise on the Corbyn factor but had said if he were to be unveiled on Saturday as Labour leader, the cost could rise further.

Moreover, strategists said victory for Corbyn, who calls for renationalisation of the railways, postal services and energy networks, could pressure the center-right Conservative government to take a tougher stance on utilities.

“It’s the first time that I can remember that an opposition party leadership campaign has had an impact on the market, and has caused interest globally,” said Morgan Stanley’s European head of FX strategy, Ian Stannard, highlighting Corbyn’s views on the EU as the main focus for investors.

“It’s always been widely assumed that the opposition parties would be supportive of staying in Europe, but that assumption could be called into question,” he said.

While all three of the other candidates had taken a pro-European stance, Corbyn had demanded socialist reforms before pledging the party’s support for staying in the European Union. He told Reuters on Thursday he had voted ‘No’ to Europe in a 1975 referendum.

Corbyn’s surge in popularity over the past two months has coincided with a period of heightened volatility in markets, dominated by worries over Chinese and global growth. This makes isolating the Corbyn factor complicated but investors are starting to look at the looming political risks in Britain.

Some reckon the exchange rate is already reflecting Brexit jitters.

“The overall risks facing Brexit over the course of the next 12 months are already exerting a cap on sterling,” said BMO Capital Markets’ head of FX strategy, Stephen Gallo.

The cost of hedging against big swings in sterling’s exchange rate against the dollar over the next two years rose to 8.65 percent in late August, its highest since the May elections, and had remained elevated as investors sought protection against volatility in the run-up to the vote.

An admirer of Karl Marx, Corbyn’s ideas on “People’s Quantitative Easing,” which would see the Bank of England create 50 billion pounds ($77 billion) per year to fund public infrastructure projects, have been criticized by many in financial markets as undermining BoE independence and a potential source of inflation.

On Thursday evening Corbyn took aim at the Royal Bank of Scotland, saying he would introduce a punitive windfall tax if he became prime minister in 2020 to recoup money lost by privatizing state assets too cheaply.