Inside the NFL’s big data play 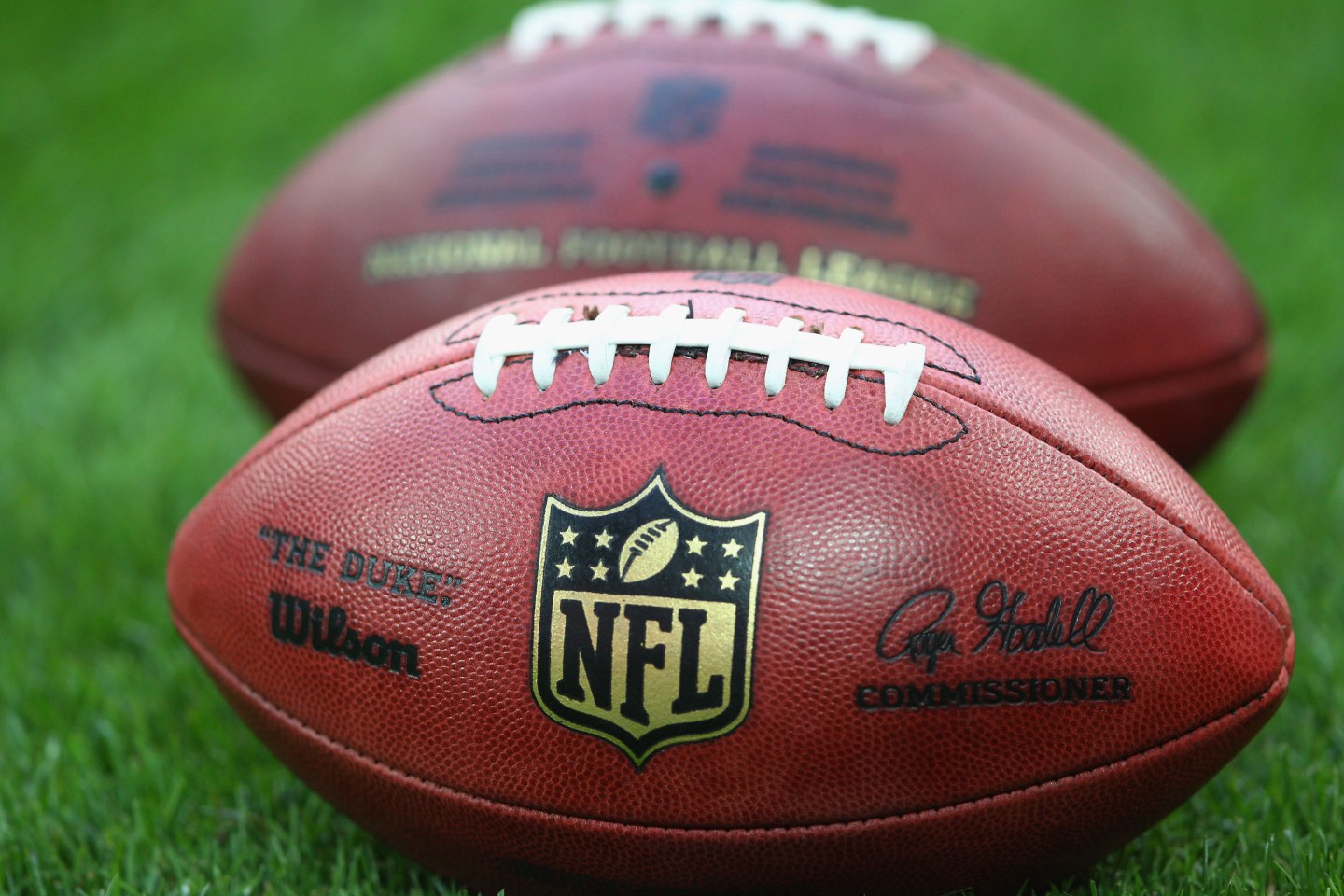 LONDON, ENGLAND - OCTOBER 23: Match balls siton the turf prior to the NFL International Series match between Chicago Bears and Tampa Bay Buccaneers at Wembley Stadium on October 23, 2011 in London, England. This is the fifth occasion where a regular season NFL match has been played in London. (Photo by Warren Little/Getty Images)
Photograph by Warren Little—Getty Images

The next time Denver Broncos quarterback Peyton Manning scrambles to avoid a sack, tiny sensors embedded into his uniform will gather information about how far he sprints.

The National Football League, like many big businesses, is experimenting with collecting and analyzing huge amounts of data. The goal is to make football more enjoyable for fans by giving them an encyclopedia of statistics to pore over like how fast their favorite receiver can run and how much ground he covered during individual plays.

Professional football has partnered with Zebra Technologies, which typically helps companies like Boeing to track parts in their warehouses, to install technology in all 31 NFL team stadiums to follow what happens on the field. To help, all players wear two of the company’s chips inside their shoulder pads.

Early results of the test will be on display this weekend when most teams kick off their regular season. CBS broadcasters calling the games will get the data and presumably use it in their commentary while NFL will also make some of it available to fans through the league’s app and website.

“This data is valuable,” said Matt Swensson, the NFL’s senior director of emerging products and technology.

The technology works using a type of wireless technology called radio-frequency identification (RFID) transmitters. Normally, they are used to help companies track their inventory in real-time. In this case, it has been repurposed to track players on the field. A linebacker sprinting down the sideline is little different from an aircraft engine blade moving around a factory floor, at least to tracking technology.

RFID receivers scattered around the stadiums keep a watchful eye. Levi’s Stadium, home to the San Francisco 49ers, is equipped with 22 receivers, for example.

The combination of chips and receivers helps Zebra understand the exact location and movements of each player on the field. Although the chips don’t record a player’s speed and acceleration, Zebra and NFL can roughly calculate it based on the location data.

All the collected data is stored in servers in the stadium and analyzed using custom software. That information is then funneled to a NFL broadcasting truck—typically sitting outside the venue—and eventually to the NFL’s cloud data centers, hosted by Amazon, explained Michael King, Zebra’s director of sports products.

During a recent preseason game at Levi’s Stadium between the San Francisco 49ers and Dallas Cowboys, Zebra showed off its technology in action. Two employees sat in a suite high in the stadium watching their computer screens while the players tackled and blocked each other below. They logged when plays ended, incomplete passes, and whether referees called a penalty. Otherwise, the computers had no way to differentiate between play action and players milling around while they waited for the next ball snap.

Zebra (ZBRA) has created a command center in San Jose, Calif. to monitor the NFL’s games and make sure that all the information flows smoothly. If there’s a hiccup at Raymond James Stadium, home to the Tampa Bay Buccaneers, for example, Zebra technicians in San Jose troubleshoot the problem.

The NFL signed its data deal with Zebra last year. Financial terms were not disclosed. During the previous football season, the company had 17 stadiums equipped with its technology. Since then, it has worked to get its gear into all of the venues.

Like with football, there is some off field drama around Zebra. Lynx System Developer, a sports-technology maker, has sued Zebra in federal court for allegedly stealing its technology. In a statement to Fortune, Zebra denied the accusation.

Although Zebra can see all the data generated from games and use it to calculate statistics, the NFL is the sole owner of the information and ultimately decides what to do with it. So far, the league has banned NFL teams from using data like player acceleration during game time, said Swensson.

It’s a matter of fairness because some teams were only recently outfitted with the technology. Compared to other teams, they may not be as familiar with how it works and therefore at a disadvantage.

In the future, the technology may be expanded beyond just tracking players. During last year’s Pro Bowl, for instance, Zebra installed chips inside the footballs used in the game to monitor how far they were thrown.

“We are two years away from tags in every piece of equipment” used in a game, said Jill Stelfox, Zebra’s vice president and general manager of location solutions.

But this year, the balls will be sensor free.

“There are some politics around the ball,” Stelfox emphasized, referring to the infamous Deflategate scandal that rocked the league. “We are out of the politics.”

For now, the NFL is merely dribbling out its data. But King believes it will eventually help create a new era for the game that will make fans feel more connected.

Think of baseball fanatics who can’t seem to get enough data about their favorite teams and players. Pro football wants to create something similar.

“The best fans are the most engaged fans,” King said before shifting to the potential financial windfall. “They will pay for subscription plans to get this data.”

In the future, coaches may be able to use historical data to see whether players are improving, King said. He used the example of Jarryd Hayne, a 49ers recruit who was previously a high-profile Australian rugby league MVP. Using the data, the team can better study his performance throughout the season, King explained. Additionally, the team can follow him in practice because it is one of three that has had its training facility equipped with tracking technology.

Football coaches typically study hundreds of hours of video. With more data and statistics, the hope is that they will be able to make better decisions.

“Football is more of a chess match,” King said. “This technology is huge for that.”

For more on the NFL, check out the following Fortune video: