The secret to New Orleans’ comeback 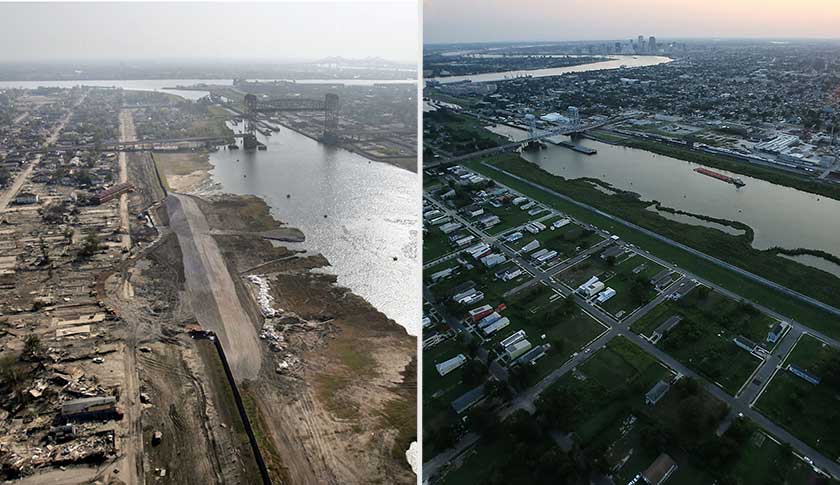 Repairs continue on a large section where the levee broke during Hurricane Katrina in the lower Ninth Ward in New Orleans, La., Friday, Oct. 14, 2005. The lower Ninth Ward is still closed to residents because of the massive damage.(AP Photo/Don Ryan) NEW ORLEANS, LA - AUGUST 24: Homes and vacant lots stand in the Lower Ninth Ward (L) in front of the Industrial Canal (CENTER R) and downtown New Orleans (Top) on August 24, 2015 in New Orleans, Louisiana. The area was one of the most heavily devastated areas of the city following a levee breach along the Industrial Canal during the aftermath of Hurricane Katrina. The tenth anniversary of Hurricane Katrina, which killed at least 1836 and is considered the costliest natural disaster in U.S. history, is August 29. (Photo by Mario Tama/Getty Images)
Photographs by AP/Getty Images

For America’s Gulf Coast, the last decade has been a story of recovery and resilience unlike any other. Ten years ago, Hurricane Katrina and the federal levee failure decimated a whole city. Last week, alongside Presidents Clinton, Bush and Obama, philanthropic leaders and members of Congress, I was honored to return to New Orleans to mark the city’s revival and learn from the community’s story of resilience.

New Orleans’ resilience story extends well beyond water drainage or physical reconstruction. It’s a story of how a community rallied behind the idea of creating a diverse, inclusive economy that works for everyone. That no longer relies solely on oil and tourism to succeed, but now has blossoming startup and biotech sectors rife with entrepreneurship. The newly renovated St. Roch Market is renovated and humming – home to 19 small businesses. The Idea Village supports local entrepreneurs like the owners of the Cajun Fire Brewing Company, the only African American owned craft brewery in the U.S. As a result of this new business, sales tax revenue in the city grew 9% each year in 2013 and 2014 . The Crescent City didn’t just rebuild – it transformed, and created a sense of community and hope that had drowned when the levees broke. It’s what we, at The Rockefeller Foundation, define as “resilience.”

Last Thursday, as part of his visit, President Obama met with Mayor Mitch Landrieu, Chief Resilience Officer Jeff Hebert and myself to discuss New Orleans’ visionary resilience strategy. Together Jeff, Mitch and I were able to share New Orleans’ plan for the future, on display in the Resilient New Orleans strategy, launched days before the president’s visit. The strategy emphasizes that resilience requires equitable opportunities and an integrated approach. No one can deliver resilience alone. Only when governments and businesses break down their respective silos and work together, can sustainable strategies be developed and leave positive and lasting impacts on communities.

100 Resilient Cities, an initiative pioneered by The Rockefeller Foundation to help cities across the globe, including New Orleans, build long-term resilience strategies, will now be connecting the city with private sector actors who will partner with New Orleans to implement the strategy. This is a model 100 Resilient Cities will replicate with 99 other cities.

Here’s how it works: We begin with opportunity. A partnership between the water-management firm Deltares and local organizations is training and employing 250 African-American youth to bolster New Orleans’ flood mitigation plans. The work, which will clear sewage more effectively and turn it into usable water, will also provide a valuable job opportunities where 52% of African American men are unemployed. We call a project like this – one that improves employment inequality, infrastructure and the environment with a single investment – the resilience dividend.

On a tour highlighting resilience projects around the city, the Mayor’s office, federal Office of Management and Budget Director Shaun Donovan and I saw several developments that are already yielding these dividends. From the BioDistrict, an innovation hub that catalyzed renewed revitalization efforts, to rain gardens that absorb water during heavy storms and act as a recreational park for neighbors in good weather, the city is full of promising developments fueled by partners working together across sectors.

On the tenth anniversary of Hurricane Katrina, I flew over the advanced coastal restoration and protection efforts underway at the coastline. From that height many coastal cities look alike, but New Orleans stands out; both for its vulnerability and how the city is learning to live with water. The coastline restoration and the rebuilt levies are designed to protect a city that has also rebuilt its economy and its community to ensure that when the next one hits – they’re ready.

Judith Rodin is president of The Rockefeller Foundation.