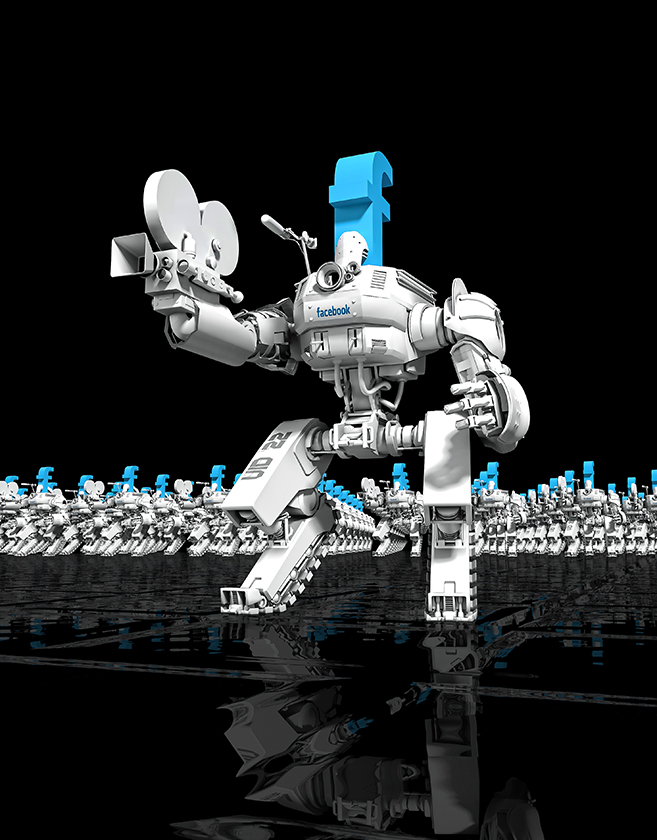 When copyright owners made a stink this year over millions of unauthorized videos flooding Facebook, the company promised it was working on new measures to put a stop to this. Now, Facebook’s solution has arrived—sort of.

On Tuesday, Facebook (FB) announced it will begin testing a beta version of a new homespun technology that can quickly spot instances of “freebooting”—where people rip a video from another platform in order to share it on Facebook—and also notify the owners about the problem.

“[W]e have been building new video matching technology that will be available to a subset of creators. This technology is tailored to our platform, and will allow these creators to identify matches of their videos on Facebook,” said the company in a blog post. “Our matching tool will evaluate millions of video uploads quickly and accurately, and when matches are surfaced, publishers will be able to report them to us for removal.”

This is no doubt welcome news for the amateur video maker who complained that a UK media company had racked up millions of shares on Facebook by stripping his work from his YouTube channel. Ditto for martial arts outfit UFC, which recently had to look on as users distributed a video of Ronda Rousey’s brief-but-brutal victory to all corners of Facebook sans permission.

For these video owners, “freebooting” is especially frustrating because it’s hard to keep tabs of when and where it’s occurring. Unlike YouTube, which is open for all to see, most Facebook videos are played within the closed channels of people’s friend groups.

Now, Facebook’s new technology will give copyright owners a bigger say over those non-public videos. According to a person familiar with the company, the system will work by first informing Facebook users (in situations where a video may belong to someone else) that they need to take an additional step before they upload it. If the person goes ahead and uploads it all the same, the owner of the video will be able to review the video—but will not be told who uploaded it in the first place.

This process suggests Facebook is taking care to both protect the privacy of its users and ensure companies can’t wrongfully purge millions of videos willy-nilly. Imagine, for instance, a home video of a child’s birthday party posted on Facebook that showed the movie “Frozen” playing in the background—if the takedown process is too easy, such moments could be casualties of copyright. Facebook is trying to walk that line of intent.

Facebook’s new homespun tools come in addition to those it already employs from Audible Magic, a service that helps studios track and take down unauthorized content. The move may partly placate some critics, but it also raises two obvious questions: First, who will be able to use the new takedown system?

For now, the company says its partners include youth media company Fullscreen and video aggregator Jukin, as well as ZEFR, a media monitoring service that helps run YouTube’s money-making Content ID service. But it’s not open to everyone, which is perhaps odd given Facebook’s professed concern for little guys.

“[E]xisting measures work well for many creators, but some publishers with particular needs, including creators whose videos have gone viral, have been asking for more tools,” wrote the company in Tuesday’s blog post (emphasis mine); however, the person familiar with Facebook’s thinking told me that not all viral video owners will get to use the new tool.

The reason, for now, may simply because the roll-out is still in a beta stage. In its post, Facebook also says “this is just the beginning,” which suggests that some video owners will just have to gnash their teeth a while longer.

The second big, unanswered question is: when will Facebook show us the money? Tuesday’s release says nothing about ad-based revenue sharing, which has been a fixture of YouTube for a decade, nor about any other plans for people to get paid.

The company refused to provide any more details about when or if a payment system will arrive but, if you read the tea leaves, it looks like one is coming soon. Specifically, Facebook’s partnership with ZEFR suggests it’s preparing to introduce a YouTube-style copyright arrangement where video owners can choose to take a clip down or insert an ad instead.

Facebook’s slow-rolling on copyright matters is likely no accident. Despite the company’s pleas for patience as it confronts the technical challenges (Really? Since when does Facebook, the master builder, struggle with tech?), the delay on addressing freebooting is likely strategic. Specifically, the company appears to have chosen to put the copyright issues on the back-burner in order to focus instead on making its video offerings really, really huge.

Although many people remain unaware, Facebook has stealthily jumped into a full-blown YouTube rival. As my colleague Erin Griffith explained in June, the company’s daily video views hit a staggering 4 billion earlier this year. The number is likely even higher by now (Facebook declined to provide an updated figure), and advertisers are drooling.

It’s hard to predict if Facebook will try to out-YouTube Google (GOOG) at, well, YouTube, or if it will push a different model—perhaps some sort of syndication arrangement with Fullscreen and its partner channels.

Whatever the outcome, it will be fascinating to watch as the one-time startups Facebook and Google are poised to duke it for content in the same way that networks and cable companies have long done for television shows. As they said back in those old TV days, stay tuned.