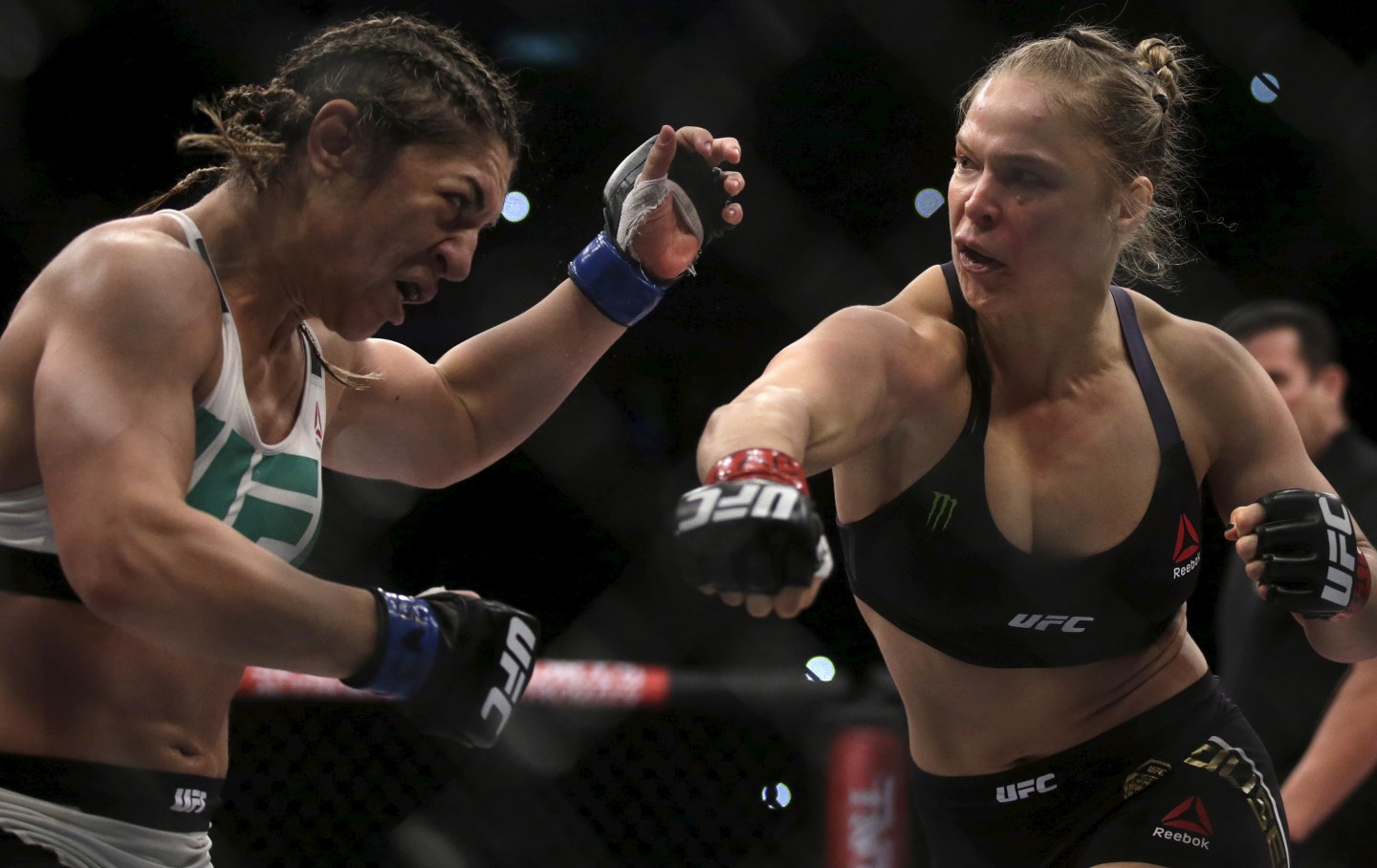 Ronda Rousey is on Facebook. And not just in a social media presence kind of way: No, the world’s biggest sports star is there in all her ferocious, fighting glory. There’s a good chance you’ve seen someone share Rousey’s latest triumph, in which she pounds the daylights out of Bethe Correia in 34 seconds flat and, if not, a quick Facebook search will turn up the fight video soon enough.

This is good news for Rousey fans but the UFC, whose job is to squeeze every last dollar out of her fame, may be less pleased about all this Facebook footage. As Re/Code’s Peter Kafka points out, the video can also be found on YouTube (GOOG) , but it’s not as ubiquitous. And unlike Facebook (FB), the UFC and Rousey at least have an opportunity to insert ads and make money when someone uploads a YouTube video.

All of this highlights the copyright concerns that have piled up on Facebook’s door since it shot out of nowhere this year to become a major force in online video. As my colleague Erin Griffins reported, the social network is already notching up north of 4 billion views a day.

So far, Facebook has side-stepped the copyright question, even as video makers sling more accusations about the company’s lying, cheating and free-booting. As I’ve suggested before, this could be deliberate: Facebook may be making a strategic choice to stay snug in a legal safe harbor that protects platforms from copyright claims related to user uploads. Content creators may howl, but Facebook can always demure and and worry about growth instead – at least until those howls grow so loud it must fulfill its promise to introduce a YouTube-style Content ID system (which gives copyright owners a choice of taking down a clip or monetizing it).

But if Facebook is indeed dragging its feet, can this go on much longer when items like Rousey’s fight are so easy to find? I mean, one basic search (“Ronda Rousey fight”) turned up plenty of quality clips, including this “Near the Scene” montage (don’t try to click since this is just as screenshot):

In response to an email query, a Facebook spokesperson reiterated an earlier claim that the company takes intellectual property very seriously and pointed to a Medium post where a product manager responded to a recent complaint about “theft, lies and Facebook video.”

In other words, stay tuned. It will be interesting to see how long the copyright kabuki goes on (and also how Facebook handles the all-important fair use issue). Recall it was a rich sports organization, the Premier League, that was one of the first to sue YouTube in a failed billion dollar class action suit. Facebook better hope the UFC folks are patient sorts.