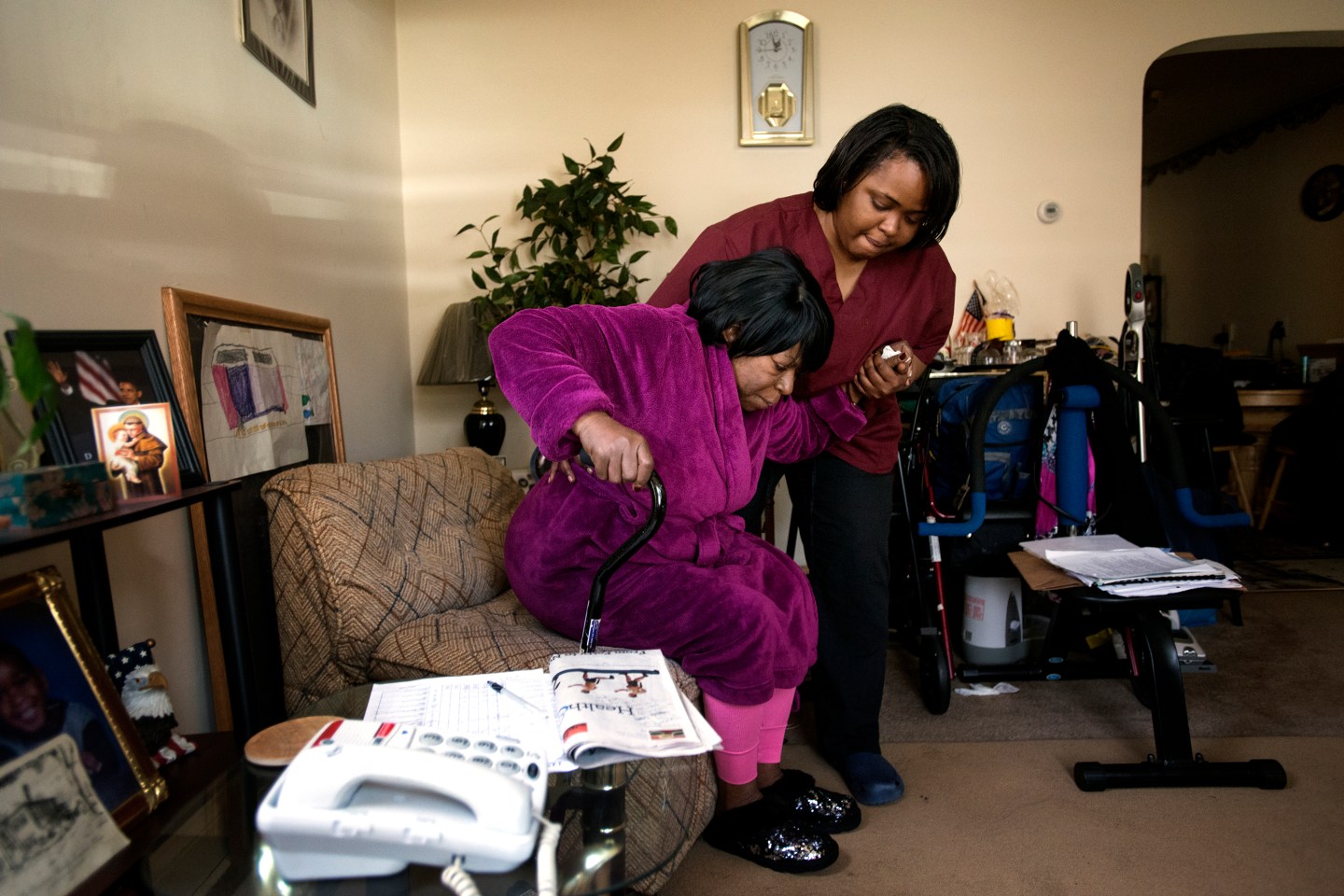 WASHINGTON, DC - APRIL 10: Nordicka Burton, 30, assists Darlene Jones on April 10 in Washington, DC. Burton works as a home health aide. Burton, a single mom, has been living with her sons at DC General and hopes to move into transitional housing soon. Burton is employed full time but has credit problems and has not been able to rent an apartment. Burton does not like the environment at DC General (she thinks there are too many hostile interactions) and tries to spend as little time at the shelter as possible. She often takes her boys to parks and a friend's house so that they don't have to return to the shelter until curfew. (Photo by Bonnie Jo Mount/The Washington Post via Getty Images)
Bonnie Jo Mount—The Washington Post—Getty Images

President Barack Obama can finally fulfill a promise he made to home care workers four years ago to give them more pay.

The Court of Appeals for the D.C. Circuit on Friday handed a win to the Obama administration by upholding a Labor Department ruling requiring employment agencies to pay the minimum wage and overtime to home care workers who tend to the sick, elderly, and disabled.

President Barack Obama first promised home care workers a raise in 2011 when he said he would expand the nation’s minimum wage and overtime laws so they covered those in the profession. In 2013, the Department of Labor introduced a rule that would have made good on that guarantee. The department’s guideline removed a longtime Fair Labor Standards Act exemption that had allowed third-party employers of home care workers to avoid paying the minimum wage or overtime to employees who provided so-called companionship services to clients. It was supposed to go into effect January 1, 2015.

The rule was never implemented because industry groups—the Home Care Association of America, International Franchise Association, and the National Association for Home Care and Hospice—asked a federal judge to invalidate it. The trade groups argued that having to pay higher wages would destabilize the home care industry and make it harder for families to pay for the care of aging or disabled relatives. In January, Judge Richard Leon in Washington, D.C., obliged, ruling that the Department of Labor had overstepped its power in redefining the FLSA’s 40-year-old exemption.

The court of appeals’ three-judge panel overturned the lower court’s decision on Friday when it decided that the FLSA gave the Labor Department the authority to determine how exemptions from minimum wage and overtime protections applied to in-home care services.

The debate over how much home care aides has pit the livelihood of workers against the needs of vulnerable individuals and their families, many of whom struggle to afford at-home care. That said, raising home care workers’ wages became a mission of the Obama administration because pay in the sector is so low. The median salary for a personal care aide is $19,910 annually, or $9.57 an hour; a home health aide earns $20,820, or $10.01 per hour. And as Americans age, these professions are expected to grow by 49% and 48%, respectively, from 2012 to 2022, eclipsing the average growth for all occupations: 11%. Indeed, they are the second- and third-fastest growing occupations in the nation—behind only industrial-organizational psychologist, a job that brings in median annual wages of $83,750. On the Bureau of Labor Statistics’ list of 30 fastest-growing jobs, personal and home care aides are the worst paid.

The Department of Labor’s rule only applies to third-party home aide staffing agencies, which employ nearly 1.9 million people nationwide. Workers employed directly by clients or their families are still exempt from minimum wage and overtime laws.

In a statement on Friday, the Labor Department said the court’s ruling proved that its rule was legally sound. “And just as important,” the statement says, “the rule is the right thing to do—both for employees, whose demanding work merits these fundamental wage guarantees, and for recipients of services, who deserve a stable and professional workforce allowing them to remain in their homes and communities.”

The department did not comment on when the rule would go into effect. Its opponents could still introduce further delays, says Christine Owens, executive director of the National Employment Law Project, which advocates for workers. The industry groups could file for a rehearing or file a petition for writ of certiorari to the Supreme Court.

Attorneys for the industry groups did not immediately return a request for comment.