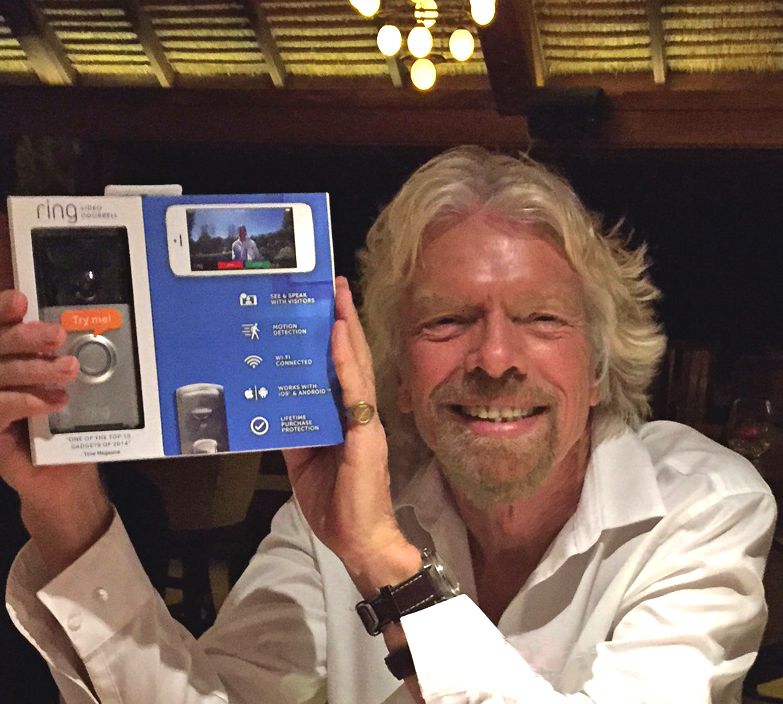 Jamie Siminoff, CEO of Ring, a maker of a video doorbell, is proof that a missed connection isn’t the worst thing that can happen to an entrepreneur.

Fourteen years ago he met Richard Branson, the head of the Virgin Group, in an elevator in an airport hotel in Brussels. Branson was there to launch a new airport for Virgin Atlantic and Siminoff was returning from Kinshasa in the Democratic Republic of the Congo after buying a telecommunications business. Siminoff said he and Branson has a great 20-minute conversation in the elevator and Branson asked Siminoff to get in touch with him the next day through the hotel.

But when Siminoff tried to get Branson a message early the next morning, the hotel clerk denied Branson was staying there and Siminoff never got through. Still, Siminoff went on to found a few more companies, and has now raised millions in a funding round for his latest venture. He is philosophical about that early lost opportunity. “I probably would have been successful, but successful in the way of working for Richard Branson, and not having started so many companies,” he said.

Instead he is living the ups and downs of life as a hardware entrepreneur. On Wednesday his company Ring announced that it had raised $28 million in funding, bringing its total private capital raised to $37.5 million. American Family Insurance, True Ventures, Upfront, Shea Ventures (a privately held homebuilder), Branson (yes, that Branson) and multiple angels also participated in the round. The funding will help Ring continue to expand its vision for the connected video doorbell, as well as add new products and features to enhance home security outside the home.

The doorbell attaches to the side of the house and can connect to existing wiring or work off a battery. When someone rings the doorbell it opens an app that runs on the user’s mobile phone. The user can see and communicate with the person at the door through the app, which comes in handy for home security, or if you’d simply like to tell the FedEx carrier where to drop a package.

That last use case is how Branson found the company. A visitor to his island spoke with a delivery person who rang his doorbell, all while thousands of miles away. Branson was intrigued enough to ask questions—immediately—of Siminoff over email. Later Branson offered to invest. “When Richard Branson asks if he can invest in your company, I think there’s only one answer you can give,” Siminoff says.

This wasn’t an easy idea-to-product story. Siminoff founded the company that became Ring in 2011, and created the first version of the product called the Doorbot, which went on sale in 2013. But the Doorbot was plagued by terrible user reviews on Amazon. The device took too long to open a video connection on the phone, and went through batteries too quickly. It was not a great user experience, although it was a great idea for a product. The Doorbot isn’t sold anymore.

“I don’t know how we survived to get to where we are today,” Siminoff said. From that experience he learned that in today’s marketplace, even if you’re a startup, your product has to be ready to compete with aluminum and glass gadgets in the same price range offered up by Apple and Samsung. The average consumer shopping at Amazon or Best Buy with $200 in her pocket could choose to spend it on a known brand, or an up and comer. Startups especially need a product to look as good and work as well just to compete.

That’s a lesson that Siminoff has taken to heart. The latest Ring has much higher quality casing for the electronics, attractive packaging, and it works really well. The company now has more than 120 employees and is ready to look beyond the doorbell to add more features that could help secure entire neighborhoods, which is Siminoffs’ real vision. He’s quiet about what exactly that will entail, but he admitted that computer vision, more social features, and additional outdoor cameras will come into play.

Meanwhile, he’s hoping that soon he’ll be able to meet Branson, who he’s so far only communicated with via email, in person again. And yes, Branson does remember his meeting in a Belgium elevator with the boy from Kinshasa. Despite the missed connection, everything seems to be coming full circle for Ring.