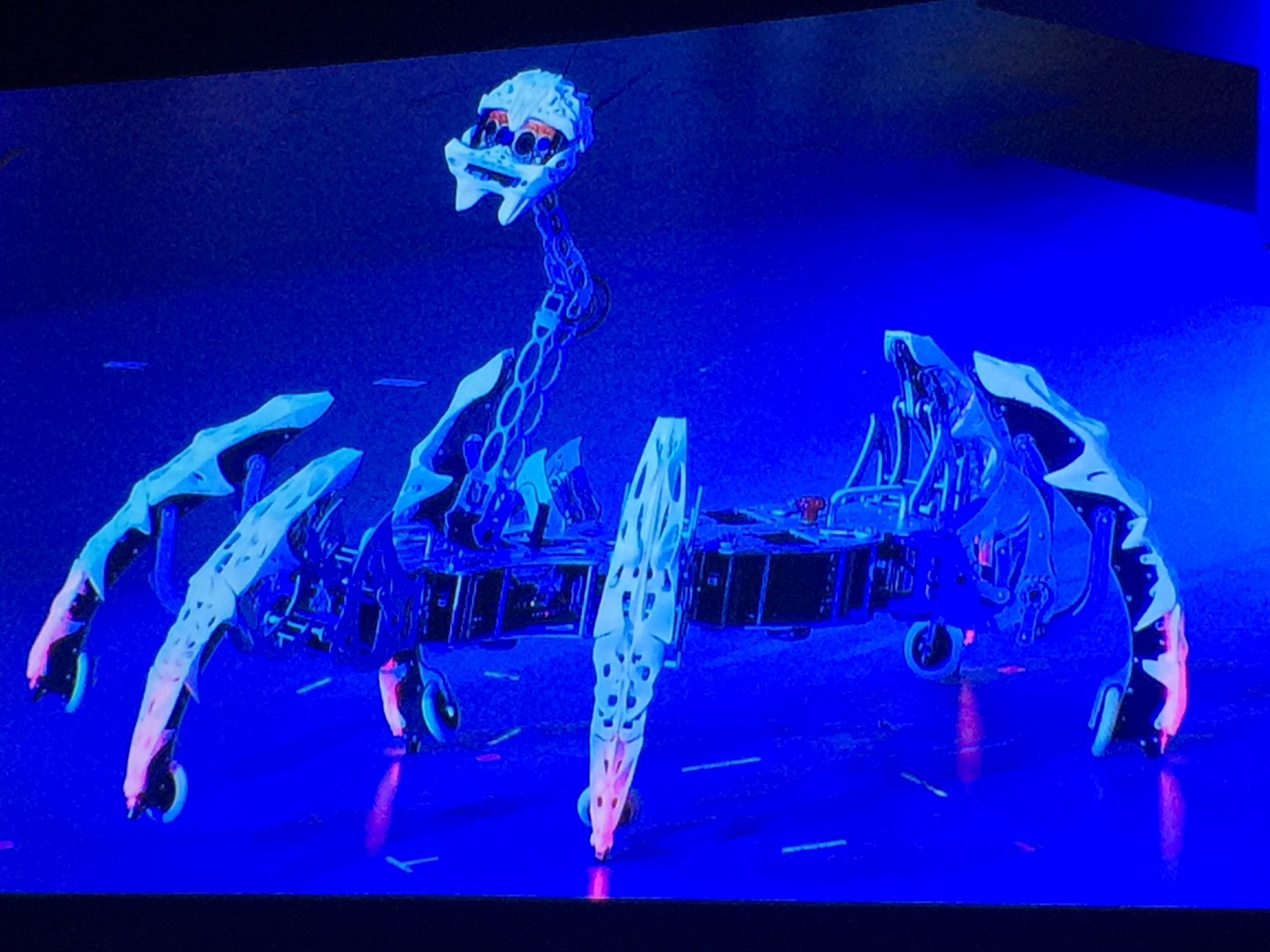 Intel’s annual developer conference kicked off Tuesday like a circus. Robotic spiders danced on stage. A BMX biker launched off a ramp and over the head of Intel (INTC) CEO Brian Krzanich. And television producer Mark Burnett (producer of Survivor and Shark Tank, among others) announced a new reality TV show in which contestants will be judged on the gear they create using Intel hardware.

But the event wasn’t all pomp. There were several innovative man-made creations on the demo floor that highlight the ways motion-scanning technology, specialized chips, and 3-D cameras can be used to make gear that businesses can actually use.

Here are a few of those interesting devices:

One of the most time-consuming tasks for auto workers is scanning barcodes, explained Sebastian Petruch of the Munich-based startup ProGlove. As workers piece together cars, they have to scan barcodes on each part to help keep track of inventory.

ProGlove’s gloves are intended to help speed things up. They’re hooked up to a small wristband device with sensors that connect wirelessly to a company’s data center. The device also comes loaded with a barcode scanner that can be triggered by pressing a small button on the pointer finger.

When workers press the button, a red light shoots out that scans the barcode, and the device can then transmit data back to the company’s servers. This task supposedly saves workers hundreds of hours annually and can also be used to track their location in the warehouse.

Wear this connected wristband and belt and save your back

It’s common for workers toiling away in warehouses to have bad backs. If you spend hours of your day lifting heavy objects, chances are that you are likely to lift incorrectly and put unnecessary strain on your back.

New York-based Kinetic aims to help workers lift boxes better with a connected wristband and belt armed with sensors and algorithms that can track a human’s movement when lifting an object. People who fail to bend their knees or who twist instead of turn hear a buzz that encourages them to lift correctly.

Hate the color of your red shirt? Try out this mirror and swap colors.

Have you ever visited a department store, saw a shirt you really liked, but only one color was available that you could try on to see how it looked? Memomi has you covered with its Memomi Memory Mirror embedded with Intel’s RealSense 3D camera technology that lets users see how their clothes would look if they were different colors.

The company’s mirror is currently up and running in a Neiman-Marcus department store in San Francisco. By fall, 16 Neiman-Marcus stores are expected to be outfitted with the mirror for customers to try out.

As of now, the mirror only lets users swap out solid colors. But eventually the mirror will be able to handle complex patterns like plaid, said Ofer Saban, chief technology officer for Memomi.

Intel showed off how its tiny Curie chip, loaded with flash memory and a sensor, can help BMX bikers perform tricks better. The company set up a ramp in which BMX bikers could ride and fly through the air, all while the Curie chips embedded in their bikes recorded their movements and told them how well they pulled off their stunts.

As Krzanich explained during the keynote session, this type of device can be used as a training tool as it scores the user on how well he or she pulled off a stunt. I can easily picture a swarm of businessmen with sensors loaded into their golf clubs giving them feedback on how well they swing.

Don’t have a racecar? Try this virtual racecar instead

If you’ve always wondered what it feels like to get behind the wheel of a NASCAR racecar, this virtual racecar simulator by VRX may just be what you are looking for.

Armed with three high-quality TV screens, a driver’s seat, and stereo system, would-be drivers can get behind the wheel and race around several virtual racetracks. All the while, the chair generates the bumps and rickety ride that cruising over 140 miles per hour might feel like.

Intel’s RealSense 3D camera technology comes loaded into the simulator too, so when drivers moves their heads, the screens display the correct image as if they were looking around in a real car.

The whole thing feels like a glorified version of an arcade racing games. If you want to join the NASCAR racers who bought this device or the amateurs who have the space in their house to accommodate something so big, be prepared to plunk down $10,000 to $300,000 dollars. This particular model being demoed can be had for $84,000, said Chad Grice of VRX.

For more on wearable technology, check out the following Fortune video: