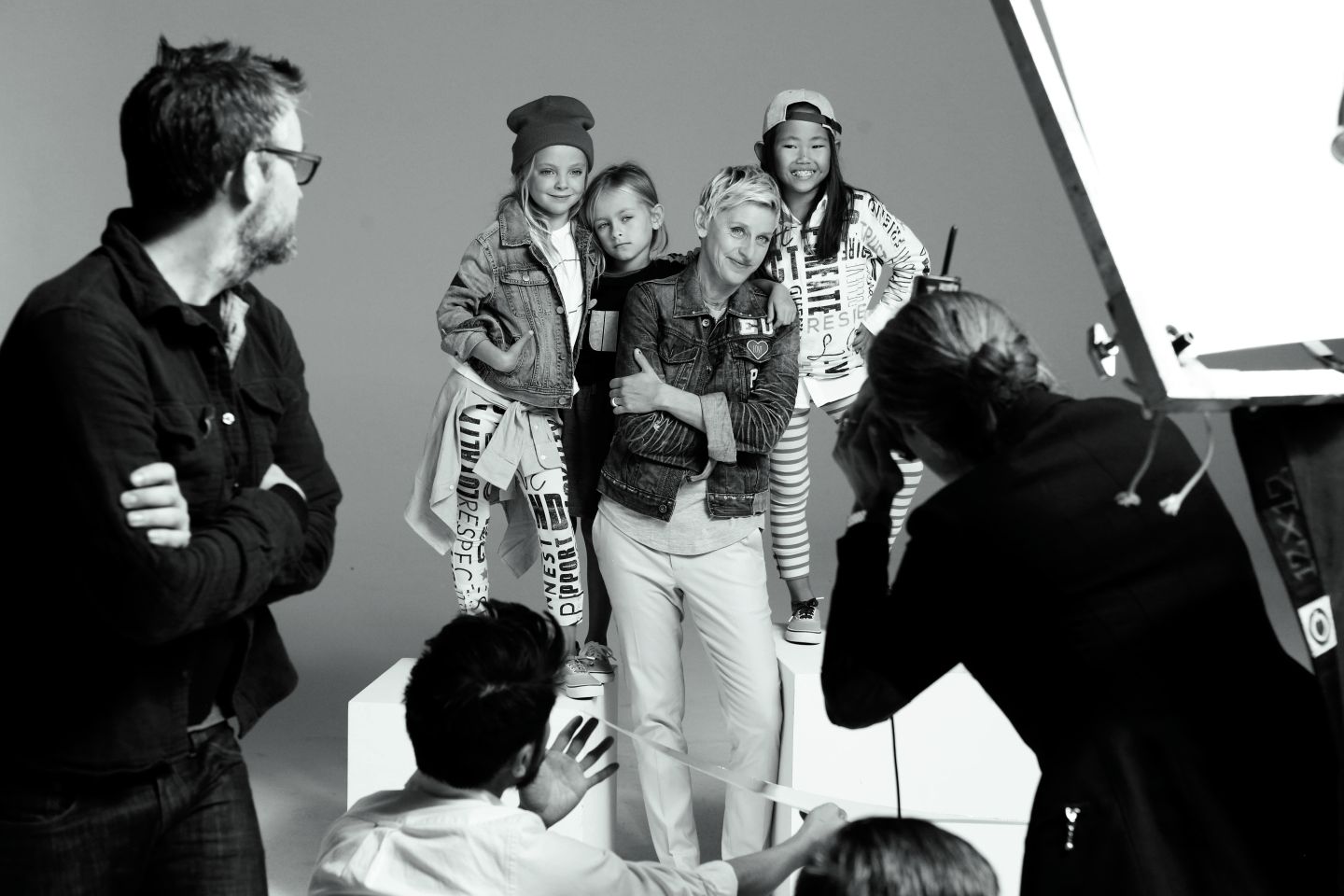 DeGeneres has long been a proponent of embracing your true self—from being one of the first big celebrities to come out as gay, to infusing her unique, goofy spirit into the Ellen Show, to launching a lifestyle brand that sells clothes that mirror her own “non-gender-specific” style.

Today, DeGeneres rolled out her latest individuality-touting endeavor, GapKids x ED, a collaboration between DeGeneres’ ED line and the Gap. The clothing collection and accompanying ad campaign “encourages girls everywhere to be themselves, do what makes them happy and take pride in who they are,” according to a statement by GapKids.

Six girls between the ages of seven and twelve act as spokeswomen and models for the brand. Each girl has a unique talent, including skateboarding, building robots and drumming. “We want to shine a light on real girls doing incredible things to encourage girls (and boys) everywhere to be themselves, follow their passions and feel pride in what makes them unique,” says Tricia Nichols, global lead of consumer engagement and partnerships for Gap.

These ideas are particularly resonant for Generation Z, or those born after 1995, says Lucie Greene, director of the innovation group at research firm JWT Intelligence. “There’s a rebellion against gender cues and the idea of just pinking everything,” she explains. “Girls want the right to be individuals.”

With celebrity role models like singer Miley Cyrus, who no longer identifies with a gender, and actor Will Smith’s son Jaden, who wore a dress to his senior prom, the line between genders is blurring for younger consumers. According to a recent report by JWT Intelligence, 82% of Gen Z survey respondents said they didn’t care about sexual orientation, and 81% agreed that gender doesn’t define a person as much as it used to.

Both the new kids line and DeGeneres’ primary e-commerce site, EDbyEllen.com, avoid gender cliches. With a focus on comfort and basic, classic looks, the collections fall under the umbrella of “normcore,” which Tom Julian, a fashion director at the Doneger Group, describes as an “anti-fashion movement.”

The word “movement” is key, says Julian. Normcore in its current form may be just a flash in the pan, but he believes the emphasis on comfort and practicality is here to stay. And while not necessarily rejecting traditional gender cues the same way that many younger people are, millennials and Gen Xers are embracing gender-neutral clothing, according to a report by the NPD Group.

With her “menswear meets California cool” personal style, DeGeneres is perfectly positioned to play in the growing non-gendered clothing space, says Julian. While high-end designers such as Marc Jacobs and Rad Hourani are already toying with gender-neutral fashion, DeGeneres is the only truly mainstream celebrity who has embraced it in her day-to-day wardrobe. For that reason, DeGeneres can “own” this movement, says Julian.

Fashion is only a small part of DeGeneres’ brand empire. In addition to her ED lines and talk show, she has had a long acting career in film and TV, established both a production company and a record label, written three books, been a spokeswoman for JCPenney and CoverGirl, and advocated for animal rights groups.

Yet despite all this, her personal brand remains authentic, says Ian Stephens, a managing partner at brand consultancy Saffron. And Ellen Show viewers seem to agree: According to a Nielsen report, she is 35% more likeable than the average talk show host, more than twice as likely to be considered both a trendsetter and funny, and 90% more likely to be considered a role model.

Between Gen Z’s gender rebellion, the normcore fashion trend, and pop culture developments such as Caitlyn Jenner’s new reality show, gender stereotyping is becoming a much larger part of the national conversation. As both a member of the minority LGBT group, and as a celebrity beloved by Americans of all stripes, DeGeneres is becoming an increasingly important voice in that conversation.