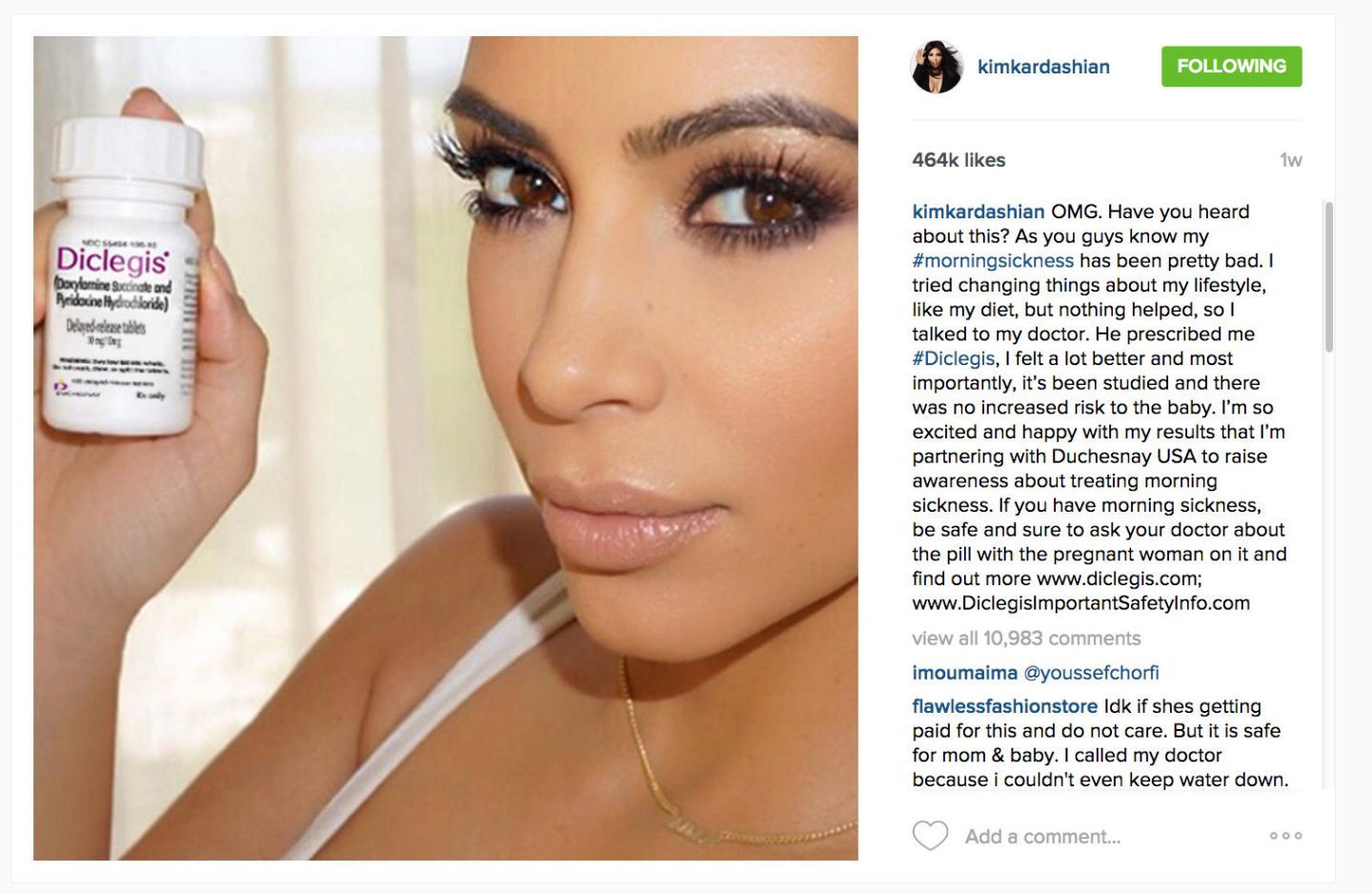 Kim K via Instagram. For news reporting purposes only
From Kim Kardashin/Instagram

My reading habits consist of law and tech, so normally it’s easy to steer clear of Kim Kardashian. But the celebrity popped up in my news feeds all the same this week after the Food and Drug Administration scolded her for flogging an anti-morning sickness drug on Instagram (FB).

Kardashian is apparently pregnant, and wants to make a buck off the fact by talking about a drug called Diclegis. She posted an image of herself wielding a pill bottle, alongside a rambling caption that began:

“OMG. Have you heard about this? As you guys know my #morningsickness has been pretty bad. I tried changing things about my lifestyle, including my diet, but nothing helped, so I talked to my doctor. He prescribed me #Diclegis, I felt a lot better and most importantly, it’s been studied and there was no increased risk to the baby.”

The FDA was not amused. It issued a letter to the drug maker, complaining that Kardashian’s social media posts failed to mention any risks associated with the medicine (apparently, Diclegis is unsuitable or hasn’t been tested on women with certain conditions). The FDA asked the drug maker to take the posts down and respond to the letter.

As of Friday, Kardashian appears to have removed the Instagram post; however, a related one on Twitter (TWTR), also cited in the FDA letter, is still up:

OMG. Have you heard about this? As you guys know my #morningsickness has been pretty bad. I tried… https://t.co/5nA8eoDvl6

The tweet is interesting, and not only because it might violate the FDA’s instructions, which says Diclegis must “immediately cease misbranding DICLEGIS and/or cease introducing the misbranded drug into interstate commerce.”

The other interesting aspect is that the tweet doesn’t appear to bear any mark, from Twitter or Kardashian herself, to show she is paid to endorse the product. This could violate the rules of a different agency: in 2013, the FTC made clear that celebrities must disclose paid endorsements on social media, just as they have long been required to do on TV or other forms of media.

Undisclosed marketing arrangements can lead to trouble, as Sony and an ad agency discovered last year when the FTC brought a legal action last year for deceptive marketing on Twitter. The action stemmed from Sony and the agency’s failure to reveal their role behind a Twitter campaign that boosted the PlayStation with the hashtag #gamechanger.

While Kardashian and Sony are hardly the first to trip over regulatory rules related to advertising, part of the problem may stem from the fact that platforms like Twitter and Instagram text are so small – there is little room for warnings or disclosures. But so far, the regulators appear to have little sympathy.