Apple’s $100 billion haircut: What the analysts are saying 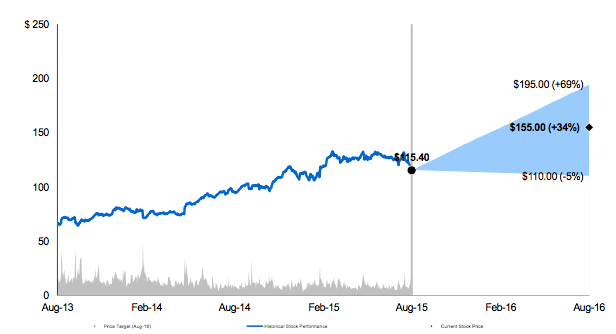 With the stock solidly in correction mode despite record quarterly sales, Apple analysts must be getting hounded this week by clients wondering what the hell is going on. Their responses are all over the lot. Here’s what I’ve seen so far.

I lead with Morgan Stanley’s Katy Huberty, who weighed in early Thursday, because she’s a cautious, middle-of-the-road type who backs her opinions with actual research. Wamsi Mohan at Merrill Lynch—whose downgrade got so much attention Wednesday—is a relatively untested newbie, having taken over from Scott Craig in 2014. Berenberg’s Adnaan Ahmed is a veteran Apple naysayer who hasn’t been right yet. Global Equities Trip Chowdhry blows hot and cold on Apple; this week, he sounds a bit hysterical.

Katy Huberty, Morgan Stanley: Addressing Investor Debates. “AAPL shares are down 12% since earnings mainly on the back of fears that iPhone units will decline in FY16… We believe iPhone units will grow next year, supported by continued upgrades of the installed base and the compelling value proposition of a discounted iPhone 6/+. Our 3% FY16 iPhone unit growth is predicated on continued upgrades with slowing new user additions. More specifically, only 27% of the 82% of US consumers who planned to upgrade to the larger screen iPhone have done so to-date suggesting Apple is less than 1/3 through the upgrade cycle… We are buyers on weakness ahead of iPhone unit and gross margin expansion in FY16. Rating: Overweight. Price target: $155.

Wamsi Mohan, Merrill Lynch: Although the long term opportunity is significant, we expect near term pressure on shares driven by (1) significant slowdown in revenue growth as iPhone growth decelerates and other initiatives like Apple Watch, Apple Pay, Apple Music take time to ramp, (2) China now accounts for ~25% of iPhone sales (C2Q) and share gains will be more difficult to come by, (3) the stock price is correlated to gross profit dollar growth (Figure 6), which despite the mix benefit of the iPhone will decelerate significantly over the next few quarters, (4) the magnitude of the beats is diminishing creating higher risk to negative revisions particularly as the Apple watch expectations are likely too elevated in 2016 , (5) the iPhone 6S/6S+ are likely to be an incremental upgrade (force touch), but not likely compelling enough for driving a significant change in the pace of share gains, and (6) we do not see incremental capital return announcements beyond the already announced plans in the near term. Downgraded from Buy to Neutral. Cut price target to $130 from $145.

Adnaan Ahmad, Berenberg: The next shoe to drop? “Adjusted gross margins have increased from 40.2% to 42.3% in the last 12 months, ie a 200bp improvement relative to the reported flat gross margins. Not bad, one may think, but herein lies the rub: this is at a time a) when Apple has raised prices on its iPhones (to offset the larger screen bill of material hike) and b) when revenue and volume growth has been in the 30-40% range, which should theoretically give leverage to the model, c) when initially at least Samsung had no product and is now cutting prices on its high-end product and d) when industry growth is slowing. We think group gross margins have peaked, or will peak again soon, and that is the next debate on the world’s largest market cap stock. Sell. $85.

Trip Chowdhry, Global Equities: Slowing China economy is disastrous for Apple’s Business. “We are using the Global Recession of 2008 and 2009 as the proxy for projecting a decline in China’s GDP and the consequential effect on Apple’s business. We are expecting a disastrous China business for Apple and are reducing Apple’s revenue estimates from China for both 4QFY2015 and full FY2016 by 8% (2% higher than the decline in Revenue suffered by any of the closest proxies during the 2008-09 Global recession).” Reduced price target to $155 from $170.

Daniel Ives, FBR: Taking a Bite Out of the Apple Bear Thesis. “While Apple has apparently become a “battleground stock” since reporting B-plus June results, we have seen this story play out before (e.g., concerns around iPhone 5 product cycle) and believe near-term weakness represents a golden buying opportunity… These concerns are pressuring Apple shares, [but] we are seeing the forest through the trees, as we believe the unrivaled fundamental strength behind the company’s iPhone 6 product cycle (less than 30% of customers have upgraded to date), a massive greenfield China market opportunity, and a host of growing new products/services (e.g., Apple Music, streaming TV possible later this fall, Apple Pay) are setting the stage for the company’s next leg of growth in FY16/FY17.” Outperform. $175.

William Powers, Baird: Remain Positive on Fundamentals. “Multiple concerns have weighed on Apple’s stock over the past few weeks, headlined by tough upcoming iPhone comps. and China sales risks. While a potential China slowdown clearly poses risk, we believe the current fundamentals remain strong with stock historically performing well in the month in advance of new iPhone launches, even in S cycle years. Coupled with what we view as a compelling valuation, we would be buyers on recent weakness.” Outperform. $155.