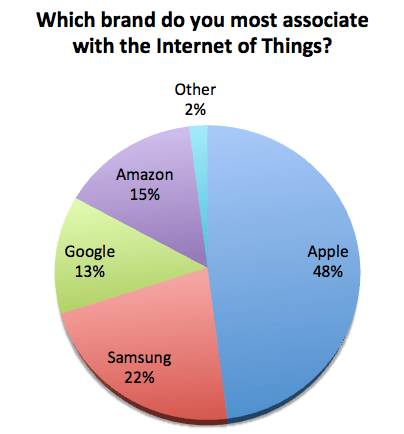 If there ever was a product category that needed a better name, it’s the Internet of Things—awkwardly abbreviated IoT.

Gartner estimates that there will be nearly 26 billion devices on the IoT grid by 2020, each with their own unique IP address.

Who will make those billions of smart devices is still very much up for grabs.

One of first out of the gate, an Internet-connected thermostat created by former Apple VP Tony Fadell, was purchased by Google in January 2014 for $3.2 billion.

But Google is not the brand that came first—or second, or even third—in the minds of 1,157 U.S. adults surveyed earlier this months by ThroughTek.

Apple came in first, ahead of Samsung.

Google, to ThroughTek’s surprise, came in fourth, after Amazon

From the press release:

“The report found nearly half of consumers aware of IoT devices on the market are most familiar with Apple’s IoT devices (48%), while surprisingly only 13 percent are most familiar with Google’s connected devices. Rounding this ranking are Samsung (22%) and Amazon (15%). Beyond familiarity, regarding purchase preference, one in four consumers noting a top preference of an IoT brand most prefer Apple (29%), whereas nearly one in five prefer Samsung (19%), 14 percent Google and 10 percent Amazon. However, one in four consumers lack a clear preference of any brand’s IoT device.”

“Although Apple is the most recognized name,” said ThroughTek’s Daniel Collins, “consumers lack a clear understanding of IoT devices currently available and the benefits provided by each.”

One benefit of Apple: Whatever the Internet of Things turns out to be, Cupertino will come up a catchier name.